Evangelicals, Donald J. Trump, and the Making of the Tribune in Chief

Paul J. Croce is Professor of History and Director of American Studies at Stetson University and recent past president of the William James Society. He writes for the Public Classroom and his recent essays have appeared in Civil American, History News Network, Huffington Post, Public Seminar, and the Washington Post. His most recent book is Young William James Thinking. 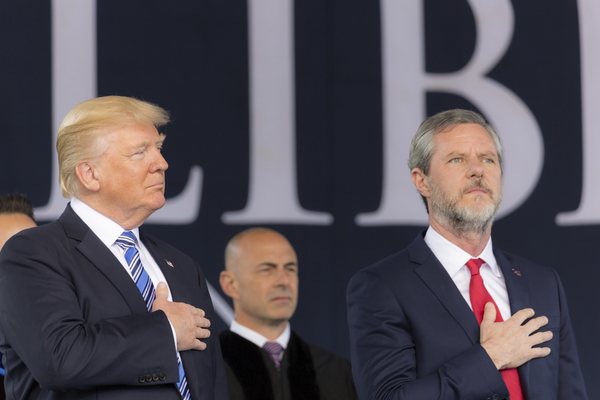 To critics of Donald Trump, the only thing more exasperating than the president’s insults, impulsive decisions, and assertions of absolute executive power is witnessing that a steady stream of apparently damning reports has almost no impact on his large band of core supporters. Representative Patricia Schroeder called Ronald Reagan the “Teflon President” because the accusations under his watch about the Iran-Contra and Savings-and-Loan Scandals didn’t stick. Trump’s Teflon shows an upgrade even from Reagan’s resistance to scandal.

There is a widespread view that Trump owes his success to the proliferation of alternative and sympathetic news outlets, along with his steady denigration of the mainstream media. This can explain the messages his supporters receive, but not why they believe them. A closer look at the voters most committed to Trump can shed light on the receiving side of Trump’s Teflon appeal.

White Evangelicals are Trump’s largest and most consistent voting bloc, with poll numbers reliably above 70%, and that support has remained steady through the Corona Pandemic.  Although the president is not religiously pious, he gains support from Evangelicals not just because of his judicial appointments, but also because he appeals to their outsider status, sounds like an authoritative preacher, and does not let fancy talk intrude on proclaiming his convictions.

This Christian tradition emerged historically in different denominations, often in defiance of institutions and hierarchy. Evangelicals have emphasized spirit over structure. Similarly, Trump has followed his own political impulses across the political spectrum.  He has been registered as Democrat, Independent, and Republican; in 2000, he ran for President with the Reform Party. Now, within the Republican Party, he shows little deference for its leadership. And he is the first US president with no prior political or military experience. To Evangelicals, Trump has the look and feel of a fellow outsider.

And Trump speaks like Evangelicals who preach from the heart in their “plain style” emphasizing forcefulness and clarity. In the “heat” of “fire and brimstone” sermons, passion of delivery has itself been an indication of authenticity. From this point of view, the factual errors and gaffes that Trump’s critics ridicule sound like honest spontaneity.

Also like Evangelicals, Trump shows little deference for high learning, and even suspects that it can serve as an elegant cloak for nefarious designs. Gilbert Tennent in 1740 warned that the “Danger of an Unconverted Ministry” stemmed from being too “letter-learned” with the “light” of mere human reasoning. Too much learning suggested more faith in the worldly ways of “natural men” rather than reliance on the fire of faith in the “new nature” brought by conversion to bring Jesus onto the seat of one’s soul. To Evangelicals, heat trumps light, just as to this president, there are dangers lurking in the fine words of elites—the more fine, the more fake, as many Evangelical preachers have warned about the Corona Virus, as Katherine Stewart points out.  Trump has often given unspoken endorsement of these views by flaunting advice for social distancing; for example, at a speech about the national emergency, he shook hands with all the officials on the platform with him, except one who offered his elbow instead.

In early modern Europe, Evangelicalism provided assurance and spiritual power for those out of power. This tradition found a welcome home in the US among “commoners” fighting the American Revolution for “no bishops and no king,” and in the leveling atmosphere of frontiers with few authority structures. In a nation of outsiders, Evangelicals gained status in early American culture, but since the late nineteenth century, their influence has declined considerably with the rise of religious liberalism, diverse faiths, and secular trends ignoring or defying religion.

Yet as Joel Carpenter observes, their own history has lent Evangelicals a shield of defense for turning cultural retreats into sources of strength. They are a group that at once feels central to the American experience, but mocked, and with those memories, many yearn for respect. They are well poised for the Trump message: “Make American Great again.” In fact, his campaign rallies resemble religious revivals. In both settings, the faithful remnant seeks a revival of something held to be true but now in danger.

With Trump’s remarkable stamina on the campaign trail, he can seem like a preacher energized by the spirit. By comparison, his prepared remarks sound tame, as if a caged tiger. He is most charismatic when speaking spontaneously, often in mocking (and for his audiences, entertaining) ridicule of those in power. This folksy style has a tough element, for example, in his January 2020 speech justifying the killing of Iranian General Qassem Soleimani, the president mocked the war powers of Congress by saying that the “Radical Left Democrats” wanted me to “get permission from Congress”—“permission,” he repeated slowly to let the ridicule sink in. That style also has a playful side, such as when he boasted that “I can be more presidential than any candidate other than maybe [Abraham] Lincoln when he’s wearing his hat.”

Stand By Your Man

With his humor and tough but folksy style, Trump has established a relationship with his supporters, who are then willing to overlook his shortcomings. While his opponents are appalled with his blunt sexual aggressiveness and abusive comments about residents of developing countries, American inner cities, and immigrants, his supporters either quietly endorse these parts of Trump’s message, or are willing to forgive them to gain the policies he champions. His tone of frank toughness in solidarity with his closest supporters surrounds these explicit comments, making them easier to adopt.

Trump has been a lifelong church attender, as a child at his family’s Presbyterian Church in Queens, NY, and then at Marble Collegiate Church, on Fifth Avenue for almost 50 years, although he has never actually become a member. Marble’s former pastor, Norman Vincent Peale, also wrote The Power of Positive Thinking, with its Evangelical confidence in material manifestations of spiritual gifts lending religious support to Americans’ hopes for social mobility.  This prosperity gospel is not supported by all Evangelicals, but it attracted Trump.  Marble Church is where Trump married his first wife, Ivana, and where he first saw Marla Maples; their affair continued while he was married and while both attended services. Trump and Maples married at the same church.

Have Trump’s improprieties been reasons to vote against him? One ardent supporter responded bluntly, “he doesn’t have to be a Christian to be part of God’s plan.” Many Evangelicals are fond of comparing the president with the 6th-century BCE Persian King Cyrus who, despite being a pagan, “in order to fulfill the word of the Lord,” freed the Israelites from Babylonian Captivity, enabling their prosperity (2 Chronicles 36:22-23). Similarly, these believers maintain that Trump’s “paganism” is less significant than his ability to appoint conservative judges and bring “a wrecking ball to political correctness,” as Rev. Lance Wallnau hoped and predicted before the 2016 election in God’s Chaos Candidate: Donald Trump and the American Unraveling. Flags in the front yards of Trump supporters similarly express their ardent belief: TRUMP in big letters followed by “No More Bullshit.” Plain talk, vernacular style, showing total impatience with business as usual.

These theological and popular defenses of Trump came to mind when I asked Trump voters about his crude comments toward women and non-whites and his promise to “drain the swamp” of power elites; isn’t he himself another elite citizen? One responded bluntly, “He’s our billionaire,” one of the elites who, even with shortcomings, is on their side. He is a powerful guy presenting himself as a tribune of average citizens, often proudly unrefined, who have felt shafted by government and business alike. And that stance appeals to about half the country.

The Evangelical tradition offers Trump an apparent firewall of protection from his critics. Even stinging indictments sound to his supporters like “fake news,” the political equivalent of heresies. Some evangelicals have strayed from their fellows, most boldly in Mark Galli’s Christianity Today editorial and with groundswell worries for years, but a majority maintain their support of the President.

Listening Does Not Require Agreement

If critics of Trump do not attempt at least some understanding of Evangelical traditions and points of view, their sound reporting and assessments will almost certainly be ignored by his supporters. Agreement is not likely or expected, but listening is possible and valuable. And that can begin to construct bridges among citizens who otherwise have little to do with each other.

American psychologist William James could have predicted these responses with his insight that our rational thoughts are immersed in “sentiments,” his name for the traditions, temperaments, and interests that shape our choices of what to think about and our ability to feel “at home” in those thoughts. Criticisms of Trump, including by Walter Moss, Steve Hochstadt, and Adam Serwer in recent pages of History News Network, gather important evidence. In addition to assembling robust bills of particulars, critics could gain traction with consideration of the commitments of his supporters. Remind them of their own claims to have moved beyond prejudice by showing interracial groups thriving while pointing to work still needed. Acknowledge that, in James’s terms, “bigness in all forms,” in government and business, has marginalized many average citizens. Recognize that privileged positions have often choked social mobility. Translate complicated issues to speak out plainly about social hurts and injustices. A folksy approach does not require anger to connect with people, and relations can be built without ridicule—starting with avoidance of mockery of those who currently support Trump. Listening to the Evangelical accent of Trump’s talk and speaking to the slights he has been so adept at addressing can provide steps toward greater ways to make America better.