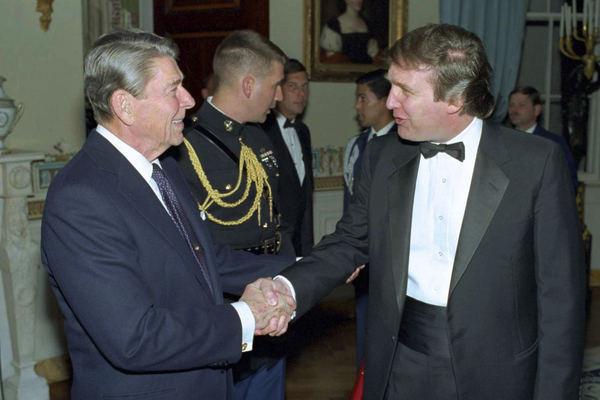 Since the ascendancy of Donald Trump, historians, political scientists, and pundits have posited that the 45th president resembles none of his predecessors. However, Trump does share a quality with Ronald Reagan: a remarkable ability to make untrue statements, while maintaining trust and support from a significant segment of the American people. Reagan seems to be a model for Trump, as both succeed by telling a story or stating a point of view that appeals to resentments without letting facts stand in the way. Among many of Reagan’s political assets, this quality should not be underrated. Blessed with a likable, affable personality and a talent for delivering inspiring speeches, Reagan could make false statements, yet millions of followers remained loyal. He gave a voice to people who felt alienated by big government, welfare giveaways, the counter-culture, and American weakness toward our Communist adversaries.

Ronald Reagan was elected twice with huge Electoral College victories and is today remembered fondly by many Americans. It may seem anomalous to compare the popular 40th president with Donald Trump, whose approval in the polls has never hovered above the mid-40s. However, a closer look at the Reagan record reveals that he too was not a consistently popular president. A history of Gallup polling during the Reagan presidency indicates a wide fluctuation in approval ratings. With the country enduring a lengthy recession, Reagan’s approval rating by January 1983 had dropped to 41% from a peak of 68% in the spring of 1981. By the time of his re-election the economy had recovered. In the spring of 1986 Reagan’s approval was back to 68%, but by the end of 1987, following the Iran-Contra scandal, approval was down to 47%. Reagan did experience consequences for policies that did not work, but when they did begin working, his likable affable personality combined with policy success caused his approval ratings to soar.

As Reagan ascended to national political prominence, objective observers and his political rivals noticed that he did not consistently have a command of factual information. His supporters have continuously opined that Reagan would never deliberately lie. If he uttered something untrue, it must have been unintentional, perhaps the result of staff error if not a touch of forgetfulness. However, this explanation strains believability.

Advocating a dismantling of the welfare system in his 1976 presidential campaign, Reagan repeatedly told the “welfare queen” story. According to Reagan, a woman in Chicago used 80 aliases, 30 addresses and 12 Social Security cards to defraud the U.S. Government out of more than $150,000. In fact, the woman was convicted of having two Social Security cards and committing $8,000 worth of fraud. This often-told story was Reagan’s effective way to appeal to millions of voters who resented the vast welfare state. The facts did not matter if the political point came through. Reagan never mentioned race, but it was clear to white voters that the welfare queen was black. Reagan and his party saw victory in bringing in previously Democratic white voters by attacking the welfare system. As president, Reagan claimed that trees cause more pollution than automobiles and as part of the Iran-Contra scandal he claimed not to have sold arms to the Iranians hoping for the return of American hostages. Each time Reagan tried to justify to the American people principles or policies he believed in and would not allow facts to interfere. Reagan supporters were so devoted to him, they excused his falsehoods and they believed that even if Reagan’s facts were wrong the principles or humanitarian instincts he stood for were right.

Donald Trump’s lies are well-documented, beginning in 2011 when he garnered national attention by claiming to have evidence that President Obama was born in Kenya, or as a presidential candidate claiming to have seen thousands of Muslims cheering the collapse of the twin towers on 9/11. This pattern of lying and appealing to resentment continues today, as when Trump announced to the American people that a drug approved by the FDA for malaria has also been approved for COVID19, or, as Trump has called it, the “Chinese virus.” Trump has told stories appealing to voters who feel alienated. These are people who believe putting racial or ethnic minorities down would make America great again.

Reagan seems to be a model for Trump’s storytelling despite their differences in temperament. Reagan, a skilled performer, came across as genial while Trump appears angry. While campaigning for president, Reagan, could appeal to white racism by telling the false welfare queen story and telling white Southern audiences about his devotion to states’ rights. Yet, Reagan seemed nice. Trump accused Mexicans immigrants of being rapists and murderers and called for a ban on Muslim immigration. The reality television show star who famously fired people appears crude.

Looking at Reagan’s life, he seems to have held strong political principles that included smaller government, devotion to a free-market system as the best guarantee of opportunity, and a strong defense against our Communist enemies. To promote his principles and achieve his political ambitions, Reagan was given to telling stories that departed from the facts and appeal to racism. Trump seems to have had no strong political principles throughout his life, rather he seems motivated by promoting himself toward fame first through real estate, show business, and now politics. To achieve fame, Trump shows no reluctance to tell lies or appeal to racism.

We have two political figures who have been caught lying or telling false stories, but still won the presidency. Both stand tainted by racism. Reagan’s memory is beloved by many Americans. It remains to be seen what Trump’s future holds. It is clear that if many white Americans feel alienated and powerless, they will vote for a candidate whose stories promise a better future or greater status for themselves, even if that candidate tells incredible falsehoods and appeals to racism. Is that the American normal or can we do better?