Frank M. Snowden is the Andrew Downey Orrick Professor Emeritus of History and History of Medicine at Yale University, and author of Epidemics and Society: From the Black Death to the Present (Yale, 2020).

Robin Lindley is a Seattle-based writer and attorney. He is features editor for the History News Network (hnn.us), and his work also has appeared in Writer’s Chronicle, Crosscut, Documentary, NW Lawyer, Real Change, Huffington Post, Bill Moyers.com, Salon.com, and more. He has a special interest in the history of visual imagery, medicine, law, human rights and conflict. He can be reached by email: robinlindley@gmail.com. 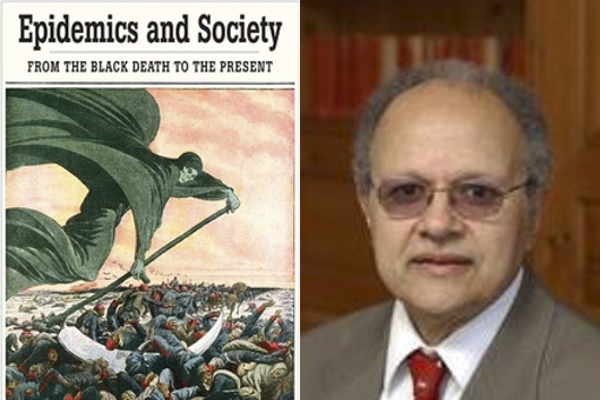 The pandemic has affected all of us in many different ways. I have a special interest in the history of medicine and I wanted to know more about past global pandemics and the story of this mysterious new virus, COVID-19.

Professor Snowden graciously talked with me by telephone from his home in Rome, Italy. We began by discussing the situation in Italy, which has been devastated by COVID-19. He also explained the coronavirus in detail and its historical context.

Robin Lindley: Most people we see are compliant and trying to observe physical distancing and other protocols. I sense that defiance isn’t a big problem, at least around Seattle area. How are you were doing and what's happening in Italy right now?

Professor Frank M. Snowden: I’m doing well personally. Like everyone else in the country, I’m locked down at the moment and it sounds a bit more rigorous than in Seattle. No one is allowed outdoors unless you have what's regarded by the state as an essential job such as in healthcare. But for ordinary mortals, you are allowed outdoors only for the purpose of shopping for provisions or medications. In fact, it's hard to show up for anything else because almost everything else is closed....

I would say that nationally, this is from reading and not from any direct observation, it seems as though the rather stern lockdown has been mostly accepted by people for several reasons. One is that it is imposed by democratically-elected people who, citizens trust, will be held accountable. Furthermore, it’s temporary, and there's just one message. The state doesn't speak with multiple voices as seems to be happening with the United States government. In other words, in the Italian situation there isn't the chaos of a president, fifty governors, boards of education, and mayors all saying different things. There's just one policy and it's uniform over the entire country....

But people are quite worried and frightened.  That comes across as well.... For example, when you go shopping and encounter someone in the street, even though you’re both wearing masks, are outdoors, and are widely separated, most of the time that person will actually go into the street and walk around the cars to avoid coming anywhere near you. That’s a clear sign.

And I heard neighbors waiting in supermarket lines grumbling about other people in the supermarket who weren't wearing masks, even though they’re not at all easy to find these days.

Robin Lindley:Why do you think the COVID-19 positive cases and death toll are so high in Italy? There are more than 15,000 virus deaths in Italy now and more than 125,000 people there have tested positive for the virus.

Professor Frank M. Snowden: That's one of the puzzles of this epidemic here. There are some clues, but I can't answer your question fully. I can just make a couple of observations in passing. One is a paradox of Italian success, and that is to say its healthcare system has been very effective in prolonging life so that you can live several years more by being here than in the United States, for example. One of the consequences is that the most vulnerable cohort of people, the elderly people, actually live longer than almost anywhere in the world. So I think that's one factor. But that doesn’t explain the whole difference.

Some of the answer may have to deal with how statistics comparatively are collected during this epidemic. Comparative observations are often like comparing apples and pears because the data behind them are collected in such different ways. The number, the amount of testing, and its extent, also varies from country to country and from place to place in a country. But the calculation of the number of deaths is very reliable because the bodies of the dead are unmistakable. The denominator, however, is the number of cases and that is a moving target. For every country that figure is very, very unreliable....

Professor Frank M. Snowden:We can say that this virus was transmitted to people because of the way in which the human relationship with the environment and the habitat of animals has been transformed by our constant demographic and economic growth, taking over more and more areas of the planet and destroying biodiversity. So that's how the disease got to humans.

Robin Lindley: Does climate change also play a role in the spread of the virus?

Professor Frank M. Snowden: Yes, climate change also plays a role in this. One can see that particularly in vector-transmitted diseases because a world is being created that extends the area within which various insect vectors such as mosquitoes can thrive, and you have the spread of Zika, malaria, and dengue fever. Those are really important aspects of climate change.

Climate change is definitely changing disease patterns and producing emerging diseases that human beings are vulnerable to. So that is a very important factor. With regard to coronavirus, it's not so clear that climate, as opposed to habitat, is the major issue. We don't know very much about this disease because it has been known to affect humans only since December. We’ll learn a lot more about it as we go forward....

Robin Lindley: You mentioned the fraught term “China virus” and the stigmatizing of Asian people. There have been some horrible incidents just in the last couple of days in the US with attacks on Asian-appearing families and even severe injuries to toddlers. From the history you share in your new book, it seems epidemics often lead to oppression and hate crimes. And you note that germ theory was a phenomenal scientific discovery, but it also led to stigmatizing of poor and dispossessed people.

Professor Frank M. Snowden: Yes, indeed. Stigma is one of the red threads that run through the history of epidemic disease.

It would be inaccurate, however, to say all epidemic diseases have produced this sort of reaction in populations. We were just talking about the Spanish influenza that doesn't seem to have produced such reactions in a sustained or widespread manner.

We can't automatically assume that when there's a pandemic disease, there will be an outbreak of stigma to accompany it. But, beginning with bubonic plague [from the fourteenth century to the eighteenth], there have been such reactions. That was a time of great violence, stigma and witch-hunts for whoever might be deemed responsible for the disease.  There were waves of antisemitism. In Strasbourg, France, the two thousand Jews who lived there were rounded up and offered the choice between either converting to Christianity or being killed on the spot. Those who chose not to convert were burned alive in the Jewish cemetery. Similarly, as the Christian Flagellants whipped their way across Europe in their 40-day processions of repentance, they often projected their violence outward onto foreigners.

That's an important part of the history of bubonic plague....

Robin Lindley: I’d like to go back to the preparedness of the United States for the coronavirus now. This administration often has adopted divisive, antiscience and xenophobic positions that don’t bode well for addressing a global pandemic. Trump is also notorious for blaming Obama for every failing of his policies. However, the Obama administration had policies and people in place for dealing with pandemics, and those people and policies were abandoned by the current administration. How do you see US preparedness for this new pandemic?

Professor Frank M. Snowden: To me, one of the most disturbing questions posed during this pandemic thus far was the one our president raised when he asked “Who could have thought?” The answer to that is that everyone should have anticipated a pandemic challenge because, since the avian flu of 1997. public health authorities and epidemiologists have been saying that a pandemic – probably of a pulmonary virus -- is an inevitability and that it's only a question of when.

In 2005, when [infectious disease doctor] Anthony Fauci testified before the US Senate, he made an analogy with meteorological science. Climate scientists can warn people who live in the Caribbean with a certainty that they will experience hurricanes in their future. It's not a matter of whether but of when, although it’s impossible to predict the date or the force of the storm. But it will definitely come. The same, Fauci said, is true of epidemic diseases. We’re ever more vulnerable to pulmonary viral epidemics because of climate change, human population growth, the destruction of biodiversity and animal habitat, and the growing frequency of viral spillovers from the animal world.

All of that is part of the globalized society that we've created and therefore the vulnerability and risks that we're facing. The idea of preparedness was raised consistently and loudly from 1997 onward....

So, to have the president of the world's most powerful nation ask, “Who could have known?” is profoundly distressing because that's something that the whole world of science knew. That's also why I was so upset by the failure of the administration to use the term COVID-19. By insisting on “Chinese virus,” the president demonstrates a blatant contempt for science and its arguments. It's in that context that the administration slashed the budgets for public health and for scientific research; stood down the sentinels; and discarded the structures on which our security depends. But such an approach did not happen in the United States alone. Other countries have done just the same. In Italy, for example, the Five Star Movement has consistently denigrated science, while the Italian government has savagely cut the funding for its health care system and for research. The budgets for the World Health Organization were also slashed.

The point is, we didn't need to be so unprepared for this event. It was predicted. The tragedy is that the world turned a deaf ear to the warnings of scientists. In this way a quarter of a century of advance notice was squandered. That’s a central part of why we are where we are today.

Robin Lindley: You’ve studied some of the most horrendous catastrophes in human history. What gives you hope now as we face a mysterious new pandemic in a time of anxiety and uncertainty?

Professor Frank M. Snowden: If I thought that the history of infectious diseases was exclusively a study of disaster and despair, I would long ago have abandoned the subject as unbearably depressing. Fortunately, however, along with the dark sides of human nature, epidemics also demonstrate our brighter and more hopeful qualities. One can see that again and again in the heroism of physicians, nurses, and caregivers; in the dedication and ingenuity of medical scientists; and in the slow, but steady advance of the science of public health and hygiene.

That history fills me with the hope that we will, in the end, survive COVID-19, and with that experience behind us, we will resolve to organize our society in such a way that we are not again scourged by a deadly pandemic.

Robin Lindley: Thank you Professor Snowden for your thoughtful insights and timely discussion of the mysterious virus we now face. And congratulations on your sweeping new history, Epidemics and Society. It’s been a pleasure talking with you. Stay safe and well in Rome.