Woman Citizen: On This Day in 1920 Helen Hamilton Gardener Became the Highest-Ranking Woman in Federal Government

by Kimberly A. Hamlin

Kimberly A. Hamlin is the author of Free Thinker: Sex, Suffrage, and the Extraordinary Life of Helen Hamilton Gardener (W.W. Norton, 2020) and tweets @ProfessorHamlin. 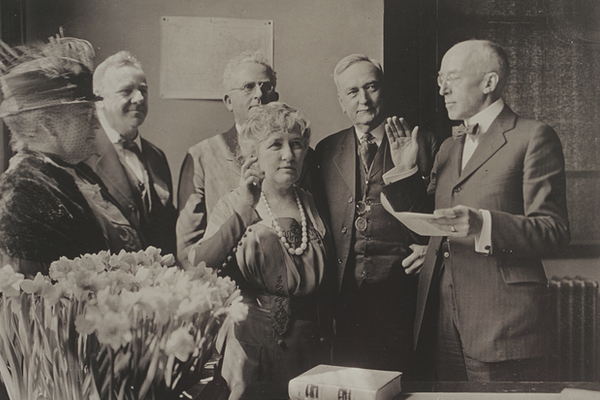 On April 13, 1920, four months before the 19th Amendment would be ratified, D.C. suffragist Helen Hamilton Gardener put on her best dress and proudly strode up the stairs to the ninth floor of the stately Munsey Federal Office Building, overlooking Pennsylvania Avenue and just three blocks from the White House, for her first day at her new job. Not only would this position provide Gardener, age 67, with her first regular paycheck since 1876, it also made her a national symbol of what it meant, finally, for white women to be full citizens (many women of color were not enfranchised by the 19th Amendment).

After being unanimously approved by the Senate, Gardener raised her right hand and solemnly swore from that day on to uphold the laws of the land as one of three U.S. Civil Service Commissioners and the highest-ranking woman in federal government, tasked with overseeing nearly 700,000 federal employees.

“Wilson Names Woman Leader,” proclaimed papers from coast to coast. Some headlines emphasized Gardener’s marital status, perhaps to assuage concerns about wives working: “Wilson Names Widow to Civil Service Board,” announced the Lafayette, Indiana Journal and Courier. “’Pleased and Proud’ at Duty’s Call” read the Baltimore Sun headline. The anti-suffrage Woman Patriot reminded readers that not only had Gardener converted President Woodrow Wilson to federal suffrage, decades earlier she had also been a member of Elizabeth Cady Stanton’s controversial committee to revise the Bible from a feminist standpoint. Though many of them had coveted the historic nomination for themselves, Gardener’s colleagues in the National American Woman Suffrage Association (NAWSA) publicly declared that the “right woman” had been honored.

In her nomination photos and letters to friends, Gardener radiated pride in her newfound role as the nation’s most prominent woman in government. She delighted in having her own secretary, a beautiful office from which she could witness the construction of the Lincoln Memorial, important work to do, and even a Cadillac and driver at her disposal during the workday. But more privately she fretted. It was a “big job,” she confessed to her friend Paul Kester. “Since it is the highest position the Government has ever offered a woman,” she wrote Kester, “I must not fail.” As she told Wilson, the “women of the country…will be on trial until I shall have proved myself efficient.”

Gardener came from a prominent Virginia family and spent her life trying to regain the stature her family had lost as a result of her father’s abolitionism, the Civil War, and many moves in pursuit of opportunity. At the age of 19, Gardener (then known as Alice Chenoweth) decided to try and make her way in the world as a teacher. Four years later, she was exposed by Ohio newspapers for having an affair with a married man, for which she was fired. Rather than cower in shame, she moved to New York City, changed her name, and began anew. Within ten years of her reinvention, she had published seven books and become one of the most sought-after speakers of the 19th century.

Gardener began her public life on the freethought lecture circuit proclaiming that the Bible was the root cause of women’s oppression. Next, she denounced sexist science, the sexual double standard, patriarchal marriage laws, and the pervasive idea that women were designed to be “an annex” to men. She learned politics by campaigning to raise the age of sexual consent for girls (in 1890, it was twelve or younger in 38 states) and wrote bold two novels to draw attention to the cause, prompting reviewers to hail her as the “Harriet Beecher Stowe of Fallen Women.”

But Gardener’s complicated personal life and health struggles hindered her professional and feminist aspirations. That is, until she married a revered Civil War hero and moved to Washington, D.C. in 1910, right next door to the Speaker of the House of Representatives. Then her personal and intellectual energies cohered around the single purpose of enfranchising women, though Gardener, like most of her NAWSA colleagues, focused on attaining the vote for white women.  Gardener became NAWSA’s “diplomatic corps,” tasked with negotiating Congressional passage of the 19th Amendment, and the group’s most trusted emissary to the White House.

Gardener had worked side-by-side with Alice Paul to organize the March 1913 suffrage procession coinciding with Wilson’s first inauguration, but she did not meet the President until the summer of 1916 when she wrote a charming letter introducing herself to his chief of staff and his wife Edith. Within weeks, she had won over the President, the First Lady, and his top aides and become a welcome daily presence at the White House.

In her letter to Wilson accepting the Civil Service nomination, Gardener observed that “All our lives we have heard of the ‘office seeking the man,’ but it is something quite new in our experience for the office to seek the woman.” Gardener told Wilson that her historic nomination had come “out of the clear sky.” But ever since the 19th Amendment passed Congress in June 1919, she had been lobbying Joseph Tumulty, Wilson’s chief of staff and her good friend, to appoint women to high-level posts. She even took multiple breaks from the final NAWSA convention, held in Chicago that February, to cable Tumulty because rumors swirled that Wilson planned to appoint Edith Owen Stoner, a D.C. suffragist aligned with the states’ rights Southern faction, to the Commission. According to Gardener, this would have been “a calamity.”

In retrospect, Gardener need not have worried. Of all suffragists, Wilson liked her best. She even bragged that she had asked the President for 22 favors and been granted 21. For her work with Wilson and members of Congress, her NAWSA colleagues referred to Gardener as “the most potent factor” in Congressional passage of the 19th Amendment.

Gardener generally demurred such praise, though in truth she had been training her whole life for her chance to make real and lasting change for women. And that is precisely what she strove to do in her role as Civil Service Commissioner (though the Civil Service became segregated under Wilson and there is no evidence to suggest that Gardener challenged these discriminatory statutes). To political observers, it seemed high time for Wilson to appoint a woman to a top post not only because the 19thAmendment was close to being ratified but also because hundreds of thousands of women had supported the recent War effort, including by filling thousands of Civil Service jobs.

After just three days in her Munsey office, Gardener wrote a friend that “so far this work has been fascinating. It is not hard and it is interesting. Also, it is, in a way a natural follow up of my past work so that I don’t believe I am such a chump as a beginner after all.” On her six month anniversary, her two fellow commissioners wrote Wilson praising him for his genius in appointing her. Despite her ongoing health problems, Gardener rarely missed a day at the office. And she had never in her whole life felt “safe financially” until she began receiving her Commissioner’s annual salary of $6,500.

As Civil Service Commissioner, Gardener endeavored to normalize the idea of women – even married ones—working. She took personal offense to government regulations that mandated women quit their posts upon marriage. She had even written the Post Master General, the nation’s largest employer, demanding to know just who he thought he was to decide for families how much money they could make. What if a wife were a “first-class stenographer” but a “lousy cook”? How dare the Post Master deny her family needed income while at the same time inflicting “indigestion.” Gardener traveled the country speaking about the importance of women working, equal pay, and women contributing to government. And she took special pride that the Civil Service Act of 1923 contained the following provision: “the principle of equal compensation for equal work irrespective of sex shall be followed.”

When Gardener had moved to New York City in 1884 with the goal of charting an autonomous life, she had few female role models to emulate. Her lifelong wish was to convince her fellow Americans that women were people, deserving not only of citizenship rights, but also of the right to make their own decisions with regard to their bodies, their careers, and their money. As she explained in her eulogy for her dear friend Elizabeth Cady Stanton, women should be universally recognized as “self- respecting, self- directing human units with brains and bodies sacredly their own.” Gardener’s historic appointment as U.S. Civil Service Commissioner marked one symbolic step in that direction, but her legacy reminds us that we must continue the work to ensure universal voting rights, to have women equally represented in government, and to honor women’s most basic right to their own bodies.