William Lambers is an author who lived in North Andover a few doors down from Anne Bradstreet.  He is the author of The Road to Peace and partnered with the UN World Food Program and Catholic Relief Services on the book Ending World Hunger. 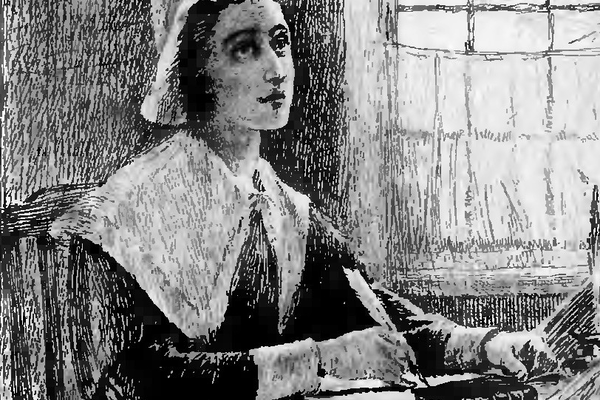 As we celebrate Women's History Month let's remember America’s first literary star, Anne Bradstreet, who was a pioneer in more ways than one.

Anne came to the new American colony in 1630 from Great Britain, with her husband Simon Bradstreet and family. She was just 18. They were Puritans who left the home country because of political and religious tensions. But traveling by ship across the Atlantic Ocean was no easy journey. It was a nightmare.  According to biographer Elizabeth Wade White “many of the colonists arrived ill and weakened by malnutrition" from the voyage.
The Bradstreets landed in Salem, Massachusetts before going  to Boston. They lived in Ipswich along the coast before moving inland to Andover. At that time the western frontier for European settlers was the Massachusetts wilderness. Life was hard. Just getting shelter and food were challenges, and fighting off sickness. Sarah Loring Bailey, author of Historical Sketches of Andover, writes "The hardships and privations of pioneer life told severely upon the delicate constitution of Anne Bradstreet."

Anne became the mother to eight children, so she had incredible responsibilities as a parent on the frontier. Her health gradually suffered. Anne was a well-educated woman, something rare for those times. She was skilled with the pen and took to writing poetry in Ipswich and continued in Andover.

You can imagine her on winter days in Massachusetts, where the sun sets very early, taking some time to write her feelings. The long winter, and sometimes sleepless nights, gave rise to many deep thoughts of life in the New World. Anne wrote “By night when others soundly slept And hath at once both ease and Rest, My waking eyes were open kept And so to lie I found it best.”

Writing poetry is therapeutic, and Anne needed that outlet. The poems she wrote were not for a public audience, but rather for her children. She was a devoted parent.  But Anne, especially with her health struggling,  knew someday she would be gone. She wanted to leave something with her kids. Anne wrote "That being gone, you here may find. What was your loveing mother's mind, Make use of what I leave in Love And God shall blesse you from above."

Not everyone approved of Anne writing poetry. At that time it was considered out of place and even dangerous for women to be educated, to write and express opinions. Anne wrote “I am obnoxious to each carping tongue Who says my hand a needle better fits, A poet’s pen all scorn I should thus wrong, For such despite they cast on female wits.” But Anne would become a trailblazer as a writer and prove that women could break through barriers that society wrongly imposed.

Anne got quite a surprise when her poems were published in a book in London. Her brother-in-law, the Reverend John Woodbridge, took her poems there for publication without her knowledge. The next family dinner must have been very interesting after that stunt!
All of a sudden Anne was a published poet in the book titled The Tenth Muse, lately Sprung up in America.  Anne was a good editor too and wanted to fix little errors in her hastily published book. She wrote about this in her poem "The Author to Her Book." Good writing is rewriting. Years later a revised version of The Tenth Muse, with additional poems, was printed in North America. She became an acclaimed poet on both sides of the ocean.

What started as thoughts in Anne’s mind are now writings available in bookstores, libraries and on the web. They can inspire writers everywhere like the poetry workshops that Save the Children runs in Africa for girls who suffer from discrimination, conflict and hunger. The power of writing.

Anne was the first published poet from America. Her best works were about love and loss. Her poem "To My Dear and Loving Husband" reads “If ever two were one, then surely we. If ever man were loved by wife, then thee. If ever wife was happy in a man, Compare with me, ye women, if you can. I prize thy love more than whole mines of gold, Or all the riches that the East doth hold.”

Anne suffered a tragedy in 1666 when her home was burned to the ground. She lost her possessions but came to realize what truly mattered was her faith in God. She writes “Farewell, my pelf, farewell, my store. The world no longer let me love, My hope and treasure lies above."

The thoughts and feelings of Anne Bradstreet, written hundreds of years ago, live on with us today.
comments powered by Disqus