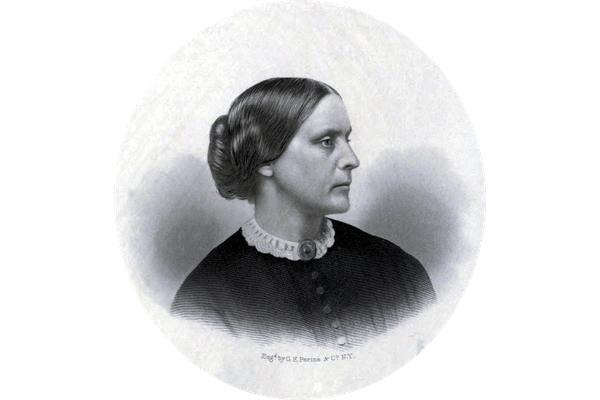 Women have reason to celebrate in 2020. August 26 marks the centennial of the enactment of the Nineteenth Amendment, or the Susan B. Anthony Amendment, granting women the right to vote. February 15 is another important anniversary, the bicentennial of the birth of Susan B. Anthony. Although it is not an official national holiday, Anthony’s birthday has been an occasion that women have celebrated during Anthony’s life and after her passing in 1906.

The celebration of Anthony’s eightieth birthday on February 15, 1900, was described as being the greatest event in the woman suffrage movement. An attendee said, “There never has been before and, in the nature of things, there can never be again, a personal celebration having the significance” of this birthday party.

The reception began at the Corcoran Art Gallery in Washington, D.C., where Anthony was seated in a queen’s chair at the main entrance, at the head of a receiving line. For three hours, she shook hands with the thousands who amassed to extend congratulations. After greeting Anthony, the crowds made a pilgrimage to the marble busts of Anthony, Elizabeth Cady Stanton and Lucretia Mott on exhibition in a room of the gallery.

Glorious speeches and praises and gifts were presented. Among those who honored Anthony was Coralie F. Cooks. “It is fitting on this occasion, when the hearts of women the world over are turned to this day and hour,” she said, “that the colored women of the United States should join in the expressions of love and praise offered to Miss Anthony upon her eightieth birthday.…She is to us not only the high priestess of woman’s cause but the courageous defender of right wherever assailed. We hold in high esteem her strong and noble womanhood…Our children and our children’s children will be taught to honor her memory for they shall have been told that she has always been in the vanguard of the immortal few who have stood for the great principles of human rights.”

In addition to being an 80th birthday celebration, it marked Anthony’s retirement from the National American Woman Suffrage Association. Anthony said she gladly surrendered her place now that she was had reached 80, “ten years beyond the allotted age of man.” However, she did not plan to stop working. “I shall work to the end of my time,” she said.

Six years later, on Anthony’s birthday, February 15, 1906, a portrait bust of Susan B. Anthony, sculpted by Adelaide Johnson, was accepted by the Metropolitan Museum of Art of New York City. This was considered an especially “crowning achievement” since institutions almost never accepted portraits of a living person as part of their permanent collections. The portrait was placed “in symbolic recognition of where she [Anthony] belongs, at the head of the grand stairway as if to greet the visiting throngs.”

Six weeks later, Anthony slipped into a coma, and a few days later, she passed away.  “Among the men and women who have paid tribute to Susan B. Anthony since she closed her eyes in death March 13, not one owes her such a debt of gratitude as I myself,” wrote Mary Church Terrell, a personal friend of Anthony and a leader of the National Colored Women’s Organizations. “. . . To her memory has been erected a monument more precious than marble, more enduring than brass or stone. In the heart of a grateful race, in the heart of the manhood of the world she lives and Susan B. Anthony will never die.”

Friends carried on the tradition of celebrating Anthony’s birthday. In 1920, a few women went to the Metropolitan Museum to try to pay tribute at her marble shrine on her 100th birthday. A florist was supposed to deliver a wreath to the museum at 3:30, but when the women arrived at 3:40, the wreath had not arrived. At four o’clock, one of the women went into a rage and began hurling insults at her friends. Three minutes later, the florist arrived with the wreath. The little band of women marched past the museum clerks and up the staircase to take measurements for placing the wreath on the marble bust of Susan B. Anthony. Clerks approached the women and upon learning that they did not have the permission of museum authorities, a clerk phoned the office. A tall, gray-haired man appeared and asked the group to leave. One of the women recalled that the occasion of Anthony’s 100th birthday was “embarrassing and painful beyond words.

The grandness of the next birthday made up for the tragedy of the previous year. On February 15, 1921, the Portrait Monument to Lucretia Mott, Elizabeth Cady Stanton and Susan B. Anthony was unveiled in the Rotunda of the U.S. Capitol. More than a thousand women and men came to celebrate the woman’s marble sculpture, the passage of the Nineteenth Amendment, and the 101st birthday of Susan B. Anthony.

However, after the glorious ceremony, the monument of women was removed from the room and placed further down below the dome in the Crypt. The Portrait Monument remained on the lower level for decades yet it still served as a rallying icon for women, particularly on Anthony’s birthday. An elaborate celebration took place in the Capitol Crypt on February 15, 1934, with more than 45 women’s organizations paying tribute to Susan B. Anthony’s leadership “in the movement for Equality for Women.” The Marine Band played as representatives of the organizations placed floral tributes at the base of the monument. The first speaker was Representative Virginia E. Jenckes, who was described as “the realization of Miss Anthony’s dream,” that is, “a woman in Congress, imbued with the Feminist’s point of view.”

Rep. Jenckes said, “I pay tribute today as a Member of Congress to the memory of Susan B. Anthony and her associates. To them should go the credit of bringing a woman’s viewpoint into national affairs, and we women who are privileged to render public service are inspired and guided by the ideals of Susan B. Anthony.”

Other speakers included Representative Marian W. Clarke of New York, Esther Morton Smith of the Society of Friends, Mrs. William John Cooper of the Association of American University Women, and Mary Church Terrell of the National Colored Women’s Organizations. The last speaker of the afternoon was sculptress Adelaide Johnson.

Today we are privileged to honor ourselves by paying tribute to Susan B. Anthony on this anniversary of her birth. Invincible leader, first of the few of such hosts as never before moved to one call, the uprise of woman. A Leader for more than a half century in the crusade of half of the human race. Mother of the whole—demanding individual liberty.

…I might entertain you with reminiscences, as we were intimate friends for more than twenty years, the friendship beginning in 1886, but to give light or information is my role. . . . As Leader of the infant Woman Movement . . . [Miss Anthony] was pelted and driven from the platform when speaking, and experienced mob attack from the rabble. She was arrested for casting a ballot…In contrast, less than a quarter of a century later the same Rochester that hissed her from the platform in the sixties opened its newspaper columns wide in praise to “Our Beloved Susan.” Two thousand hands were grasped by the “Grand Old Woman.”

In 1935, Congress honored Susan B. Anthony with a gift on her 115th birthday --- they washed the statue of her (and Stanton and Mott). Of course, after the bath, they left Susan and her friends in the Crypt.

At Anthony’s birthday celebration in 1936, women noted the progress that had been made over the decades. Anthony had been the target of rotten eggs and even some women had resented her efforts for woman’s rights. It was recalled: “Women pulled their skirts aside when she passed and declared that her shameful behavior caused them to be ashamed of their sex.” In contrast, it was noted that by 1936 there was a First Lady who was an active leader instead of a mere tea pourer, a woman minister to a foreign country, a woman Secretary in the President’s Cabinet, and a woman director of the United States Mint.

In commemorating Anthony’s birthday, women have examined the past, celebrated their progress, and looked to the future. I hope women and men across the nation will continue this tradition on February 15, 2020, the 200th birthday of Susan B. Anthony.