Was Nixon Really Better Than Trump?

James Robenalt is a presidential historian, author of four nonfiction books, including January 1973, Watergate, Roe v Wade, Vietnam, and the Month That Changed America Forever. He lectures with John Dean on Watergate and legal ethics. 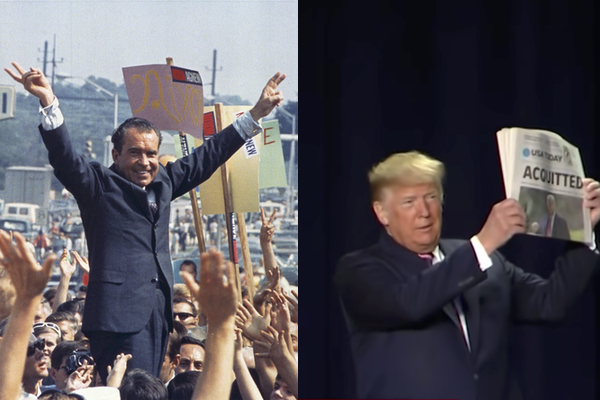 For those who think the Trump/Nixon comparisons are overdone or exaggerated, or that Nixon was a better person or president than Trump, think again. Both men were cut from the same bolt of cloth. They share common character defects: hyper-insecurity, overwhelming feelings of victimhood and unfair vilification, hatred of losing, authoritarian and bullying complexes, and loathing of enemies.

We recently witnessed another shared attribute: when things go well, they turn ugly. Neither man seems capable of enjoying or appreciating moments of vindication or success. Instead, they became laser-focused on revenge against those who they believe dishonestly attacked them. At last on the mountaintop, their instinct was to start throwing rocks and boulders at those below.

The difference between Trump and Nixon is that Trump acts out in public; Nixon did it behind the scenes as secret microphones picked up his every word. Ominously for the nation, there is another important difference. Nixon sought revenge at the beginning of his second term but was effectively stopped from exercising his worst impulses when the Watergate scandal began to cripple his presidency. In this respect, Trump is Nixon in reverse. He has survived his impeachable scandal and now has free rein to act out on his instincts for vengeance.

Trump took to the warpath the day after winning acquittal in the Senate impeachment trial. At the National Prayer Breakfast the following morning, Trump held up two newspapers with the headline “ACQUITTED” as he entered the room and then he mocked House Speaker Nancy Pelosi and her faith, saying, “I don’t like people who say, ‘I pray for you’ when they know that that’s not so.” She sat just feet away on the dais. Trump called his impeachment “a terrible ordeal by some very dishonest and corrupt people.”

That was only the start. Later in the day, the president “celebrated” his acquittal in the East Room of the White House, surrounded by Republican members of Congress and Fox News hosts in an hour-long profanity-laced pep rally. “We went through hell unfairly, did nothing wrong,” he told an animated audience. He called the Russia investigation “bullsh*t.” He reiterated his theme that what he had gone through in his first three years in office has been “evil.” He said: “It was corrupt. It was dirty cops. It was leakers and liars. And it should never ever happen to another president.”

And as might be expected the knives have come out. Lieutenant Colonel Vindman and his brother and Gordon Sondland, impeachment witnesses and a bystander, have been summarily dismissed.

On the night of January 23, 1973, President Nixon announced on national radio and television that an agreement had been reached in Paris to end the war in Vietnam. This was the culmination of his most important pledge as a presidential candidate in 1968 and 1972. Nixon swore he’d bring “peace with honor,” and finally in the first days of his second term he could proclaim its fulfillment. Nothing was more important to this man who was raised by a devout Quaker mother. In his first inaugural, in fact, Nixon declared that “the greatest honor history can bestow is the title of peacemaker.” This is the epitaph that graces his headstone at his presidential library and childhood homestead in Yorba Linda, California.

Yet on the day of this supreme breakthrough, Nixon was almost desperate to get even with his perceived enemies. His meetings and calls with presidential assistant (and later evangelical Christian) Chuck Colson are astonishing and vulgar.

Once it was clear the peace accord had been initialed, Nixon met with Colson and begged him to marshal anyone and everyone in the administration to start hitting back at those who had opposed him. Nixon had taken a huge gamble following his re-election in November 1972. The North Vietnamese who had been negotiating with Henry Kissinger in Paris became recalcitrant. Though Nixon scored a landslide win, he had no coattails and Democrats gained seats in the Senate (one being Joe Biden of Delaware). The North Vietnamese therefore dug in, recognizing that a Democratic Congress (the House, too, remained in Democratic hands) would likely pull financial support for the war when they reconvened in January 1973. All they had to do was wait things out.

Nixon, Kissinger and General Alexander Haig met in mid-December to discuss what to do. As Kissinger says on the tape of the meeting, it was time to “bomb the beJesus” out of the North, including population centers like Hanoi. The infamous Christmas bombing began on December 18. Nixon consulted no one in Congress. The world shrieked, thinking the American president had gone mad.

But the brutality worked. The North Vietnamese came back to the table and a peace accord was hashed out almost in time for Nixon’s second inaugural. It should have been a moment of gratitude and elation; it was anything but.

“This proves the president was right,” Nixon says to Colson. “We’ve got go after our enemies with savage brutality.” At another point, Nixon froths, “We’ve got to kick them in the b*lls.” He encouraged Colson to sue Time magazine for libel over a Watergate story and called his press secretary, Ron Ziegler, to order the blackballing of “the bastards atTime magazine”for the rest of his presidency.

Scores were to be settled; nothing was to be held back.

Later that night, after calmly telling the nation of the peace agreement, Nixon was back on the phone with Colson working himself into a lather. They chortled over how correspondents at CBS were “green, hateful, disgusted, and discouraged” at the news. “I just hope to Christ,” Nixon spewed, “some of our people, the bomb-throwers, are out, because this ought to get them off their ass, Chuck.” He wanted his team energized to work that very night to start the process of retaliation. “Those people who wanted me to have an era of good feeling,” he snarled, “if they bring that memo to me again, I’m going to flush it down the john.”

Nixon was unleashed. But the Senate voted a little over two weeks later to start the Ervin Committee to investigate irregularities in the 1972 election. Nixon became embroiled in the “drip, drip, drip” of bombshell disclosures and revelations and he never regain his footing. Over time, he became powerless to get even with his enemies, resigning in the summer of 1974 as he faced impeachment.

Trump is on the other side of his scandal, and he not only survived, he is virtually “locked and loaded.” He has nothing to rein him in absent a defeat in November. With no other check in sight, the country will now see just how far President Trump will go in settling old scores. If last week is the prelude, it’s going to get even uglier. Imagine if he wins re-election?