James Brewer Stewart, James Wallace Professor of History Emeritus, Macalester College writes extensively on the history of the American abolitionist movement, is the Founder of Historians Against Slavery, an international network of antiracist/ antislavery scholars, teachers and activists and is developing a line of activist sportswear featuring historical images and content. 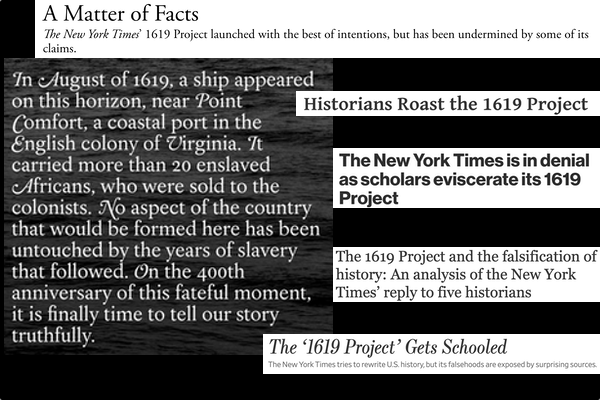 Who wins when distinguished historians, all white, pick fights over the history of slavery with prominent New York Times journalists, all black, who developed the newspaper’s 1619 Project? Beginning last year, a stream of well known scholars have been objecting publicly to the journalists’ contention that slavery, white racism and African American resistance so fundamentally define the American past that it acts as our history’s (so to speak) prime mover. The historian/ critics’ basic reply: Wrong. It’s more complicated!

One of these scholars, Sean Wilentz, quite recently detailed his objections in the January 20, 2020 issue of The Atlantic. At about the same time a dozen additional dissidents published their critiques (to which the 1619 Editors responded) in the History News Network. Meanwhile, out-front bigots like Newt Gingrich, Tucker Carlson, Michael Savage and Rush Limbaugh hijacked the controversy. They have captured the headlines, dominated the news cycle and-- as they would have it-- taken home the trophy and delivered it to Donald Trump. The New York Times journalists have emerged with collateral damage and the historians as unmitigated losers in the court of public opinion.  Lost as well was a rare opportunity for a substantial evaluation of slavery’s role in shaping our shared American experience.

But here’s what’s most important. Those of us who value the 1619 Project can reclaim our “teachable moment” by excavating beneath the heated rhetoric. There we will discover that the journalists and the historians embrace conflicting but equally valuable historical truths regarding slavery’s power to shape our nations past and present. I will soon articulate why this is so and what we can learn as a result.

First, however, we must move beyond the conflict that erupted when Wilentz, joined by James M. McPherson, Gordon Wood, James Oakes, and Victoria Bynum, eminent scholars all, forgot that they also have an obligation to serve us as educators, not as censors. By so harshly attacking credibility of the 1619 Project in their letter to The New York Times, they squandered the “teachable moment” that the Project itself intended to create. Instead, these scholars appointed themselves gatekeepers charged with the heavy enforcement of their personal versions of high academic “standards."

Instead of constructively dissenting and inviting dialogue, they berated the 1619 journalists for pushing “politically correct” distortions grounded in Afro-centric bias. “The displacement of historical understanding by ideology” is how one of them phrased it. They demanded retractions, worked assiduously (and failed) to recruit scholars of color to their cause, and sent their complaints directly to the top three editors of the Times and its Publisher A.G Sulzberger. That looks a lot like bullying. Dialogue dies when one contending party publicly attempts to undercut the other with his/her bosses.

The historians, however, were not alone when criticizing the 1619 Project. Newt Gingrich proclaimed that “The NYT 1619 Project should make its slogan ‘All the Propaganda we want to brainwash you with.’”  Ted Cruz fulminated that “There was a time when journalists covered ‘news.’ The NYT has given up on even pretending anymore. Today, they are Pravda, a propaganda outlet by liberals, for liberals.” The Trumpite commentators who had been attacking the 1619 Project since last August seized the distinguished historians’ arguments and repeated them on FOX News. Eric Erickson’s reactionary website, The Resurgent, freely appropriated them (without acknowledgement). Though the Times has defended the Project’s integrity while other media outlets have highlighted the general controversy and The Atlantic has published Wilentz’s academic critique, the Trumpistas have high-jacked the conversation.

So thanks to the triumph of Team Bigotry we have yet to discover what the historians, the journalists and the 1619 Project more generally can actually teach us. But we can make a strong start by reflecting on the contrasting points of view signaled by these titles:  John Hope Franklin’s From Slavery to Freedom and August Meier’s and Elliot Rudwick’s From Plantation to Ghetto. Back in the 1960s, when African American history was first establishing itself as a mainstream field of study, these two dominated the textbook market. Together they presented sharply differing alternatives for teaching about slavery and its legacies. Each is as influential today as it was back then.

Pick From Slavery to Freedom and you develop a history course around a text that foregrounds sustained activism that produced significant change, presumably for the better. Select Plantation to Ghetto and you prepare students for a sobering overview of racist continuity that has persisted across the centuries despite all the struggles against it. Martin Luther King perfectly captured the spirit of Franklin’s text when affirming that “The arc of history bends toward freedom.” Amiri Baraka (Leroi Jones) did exactly that for Meier’s and Rudwick’s text when lamenting the “ever changing same” of African American history.

Guided by both King and Baraka we hit bedrock. Their conflicting insights, partial though they are, carry equal measures of truth. Heeding King and the historian/critics who share his perspectives, let’s inquire: Was African American history replete with life-changing moments, epochal struggles, liberating ideologies, unexpected leaps ahead, and daring cross racial collaborations? History’s reply is “of course.”  Heeding the 1619 journalists who share Baraka’s perspective, let’s ask: Was African-American history determined by a white racism so intense that it repeatedly crushed aspirations, inflicted terrible violence, undercut democratic values, made victories pyrrhic and pulled leaps ahead rapidly backwards? The answer again is “of course.” By making these two affirmations we have finally identified a central question that can reanimate our “teachable moment.

Imagine the Times journalists and an open-minded group of historian-critics debating this question:  “To What Degree has the Arc of African American History Bent toward Freedom?” Also imagine them pursuing this discussion in a spirit of informed collegiality in, say, a nationally televised PBS forum. And since we are in the business of reanimating, let’s finally imagine that we have summoned the ideal Moderator/ Commentator, a journalist who made history, and who did more than any other survivor from slavery to educate Americans about the depth of white racism and black resistance. Frederick Douglass. Can you imagine a more “teachable moment?"

This scene, fanciful as it is, amply suggests what should have taken place had the historian-critics chosen to be teachers, not gatekeepers. It also provokes us to realize that we can searchingly interrogate our nation’s complex chronicle of racial injustice while acknowledging the areas in which we have made palpable progress. Opportunity still awaits us to snatch back the trophy from Team Bigotry and push back together, journalists and historians alike, against our own rising tide of white supremacy.

Editor's note: The History News Network is attempting to create a forum to discuss how historians can invite the public to learn and reflect on the pain and paradoxes of African American history and how journalists and historians might learn from and collaborate with one another in addressing this history. We hope to update readers soon.