Barbarous Hun: The Sinking of the Lusitania and the Rise of Propaganda 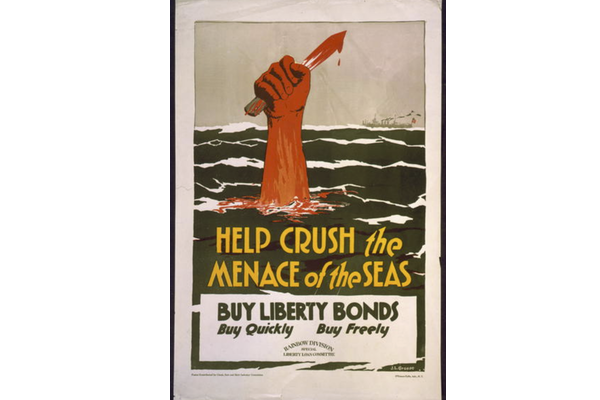 On May 7, 1915, the British passenger ship Lusitania was hit by repeated torpedo attacks emanating from a German u-boat off the coast of Ireland. Of the 1,960 passengers and crew on board, only 767  survived. 128 of the deceased were American citizens. Europe was already in the midst of World War I, but the U.S. still hadn’t entered the fray despite hundreds of American men and women volunteering to aid the Allied war effort and even enlisting in the Canadian military. However, the American public at large, including Congress, was deeply divided over if the country should formally declare war. The sinking of the Lusitania and the propaganda campaign that resulted from the event quickly turned public opinion in favor of war.

Officially launched in 1906, the Lusitania was a British passenger liner operated by Cunard Lines and at the time of her sinking, the ship was one of the largest and fastest of its kind in the world. The construction of the ship was funded by the British Admiralty with the agreement that the ship could be used for military means in times of war. According to historian Willi Jasper in his book Lusitania: The Cultural History of a Catastrophe, on May 1, 1915, the Lusitania departed New York City’s harbor for Liverpool, England with 1,951 people and military munitions on board. Some passengers must have known the journey held some risk. German submarines had recently sunk several British ships traversing the Atlantic and the German military made repeated threats that they would attack other ships.

As the Lusitania approached the southern coast of Ireland, heavy fog forced the ship to slow down. There, a German submarine (U-20) fired a torpedo which hit the Lusitania’s hull, just below the watermark. This triggered an internal explosion, forcing water into the interior that hastened the ship’s tilt, preventing the crew from launching all but six of the lifeboats. The loss of life was staggering: 1,195 people drowned or died of hypothermia in the frigid Atlantic water.

Reactions varied as news broke of the sinking of the Lusitania. The Allies quickly decried the attack as a murderous plot hatched by the barbarous Huns (a term used heavily during World War I  often seen on Allied war posters). British and U.S. war advocates quickly turned the tragedy into pro-war propaganda and created everything from postcards, to medals, to posters. The shipwreck and subsequent jingoistic campaigns damaged U.S.-German relations and tilted the neutral United States into an open confrontation with Germany in World War I by 1917.

Germany’s response to the event was equally belligerent. Following the sinking of the Lusitania, Munich-based artist Karl Goetz created a medal commemorating the event. In a satirical fashion, Goetz mocked British and U.S. business interests, the carrying of munitions aboard the ship, and the supposed neutrality of the United States. However, according to author Patrick O’Sullivan, Goetz made a fatal error that quickly and ironically backfired. Goetz ‘s medal noted the date of the sinking of the ship as May 5, 1915, a full two days prior to the actual event. This error led to charges that Germany had planned the event which further angered a bewildered public and provided fodder for propaganda tactics to exploit the deaths even further. The British and pro-war Americans quickly exploited this error by mass-producing their own version of the medal which came with accompanying propaganda literature. Captain Reginald Hall of Royal Naval Intelligence ordered 300,000 copies to be minted, which were widely distributed and only added to the growing anger among the British public.

Literature and posters were also produced, feeding on the propaganda bonanza. A U.S. poster, for example, advocated for the purchase of additional Liberty Bonds with the text, “Help Crush the Menace of the Seas,” with an accompanying image of a blood-soaked arm holding a dagger emerging from the Atlantic. Fred Spear, of the Boston Committee on Public Safety, produced a powerful and emotionally stirring poster depicting a young mother clutching her infant sinking below the waters of the Atlantic Ocean with only one accompanying word, “Enlist.”

British posters depicted the Germans as bloodthirsty devils, marauders, and murderers. A popular British poster, commonly known as the “Freedom of the seas,” mockingly portrayed the German version of the principle of the laws at sea, as the Lusitania sinks in the background. Numerous others simply carried the message, “Remember the Lusitania,” in an effort to swell the ranks of the enlisted.

The sinking of the Lusitania was, at the very least, a public relations nightmare for Germany. Despite arguments that the attack on the vessel was fully warranted, the grave loss to civilian lives on board provided fodder for propaganda machines in Great Britain and in the U.S. Although the event and the subsequent propaganda wasn’t the final trigger sending the U.S. into open hostilities with Germany, it severely affected public opinion in favor of war and further energized a war-weary public in England.