How did November become the Mizrahi Heritage Month? And what’s Mizrahi anyhow?

Lior Sternfeld is an assistant professor of History and Jewish Studies at Penn State University.

Arie M. Dubnov is an associate professor of history and the Max Ticktin Chair of Israel Studies at the George Washington University. 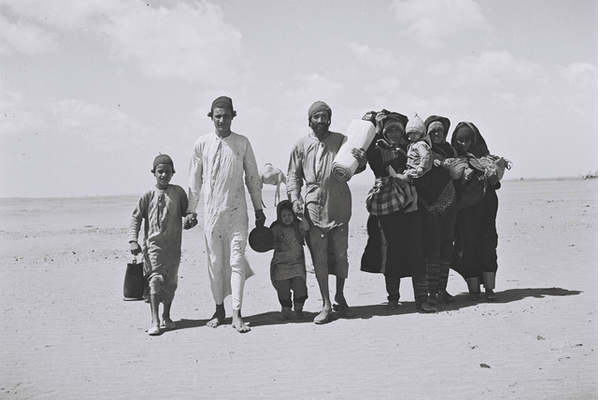 A Yemenite family walks through the desert to a reception camp

Recently, a growing number of Jewish American organizations began marking November as the "Sephardic/Mizrahi Heritage Month." In the American context, awareness months come to illuminate histories of marginalized communities whose stories are overshadowed and underrepresented in the official curricula and memory. The Mizrahi heritage month, by contrast, is not a local, grassroots initiative that emerged in response to experiences of discrimination or marginalization. Instead, it is a transatlantic importation of recent attempts by the Israeli government to commemorate the forced expulsion of Jews from the Arab and Muslim world in the wake of the establishment of Israel. Nor is November a month that has any particular significance in the histories or rituals of any of the dozen Jewish minority communities that resided in Northern Africa and the Middle East. Instead, the specific date, November 30th, was chosen by the Israeli lawmaker as a symbolic birth date of the mass exodus of Jews from Arab speaking lands triggered by the UN Partition Resolution of November 29th, 1947.

Erroneously, in the North American Jewish world, the terms “Sephardi” and “Mizrahi” are often treated as synonymous. Yet, unlike the term “Sephardi,” which originates in the expulsion of Jews from the Iberian Peninsula in 1492 (Sepharad is the Hebrew term for Spain), Mizrahi is a category which is not only far more recent in historical terms but is also politically charged and rooted in a specific Israeli context. Mizrahi, literarily meaning “eastern” or “Oriental” in Hebrew, was an adjective-turned-term that was coined in pre-statehood Palestine and later used in Israel to denote any non-Ashkenazi Jew. In early statehood Israel, a considerable degree of patronizing attitude and discrimination towards “Oriental Jews” who were regarded as less civilized, ill-educated, lacking sufficient ideological commitment resulted in discrimination. During the 1950s, Mizrahi Jews were sent to frontier settlements and to newly established "development towns" that were established in the country's peripheral regions. Soon enough, these towns transformed into conspicuous pockets of deprivation and poverty, and their Mizrahi residents became a discernible low-status blue-collar class, deprived of the same employment and education opportunities as their Ashkenazi peers. In that process, the adjective "Mizrahi” became a highly contested and politically charged term, and not a neutral sociological category.

Years of a persistent civic struggle for equal rights by Mizrahi activists and scholars in Israel, accompanied by demands for recognition of their full history, did not solve all social problems and inequality nor erase past scars. During the 1970s, the Likud Party’s leadership reappropriated the Mizrahi struggle to claim a stake at the Israeli national story. Other political parties, such as Shas, the non-Ashkenazi ultra-Orthodox party that was established during the mid-1980s, also tried to harness the Mizrahi struggle with a considerable level of success. A 2014 legislation that created a new day of commemoration for Mizrahi Jews is yet another attempt to divert the Mizrahi call for equality in Israel to a political cause. In particular, it uses the politics of memory to create a false equation between "Jewish refugees from the Arab World" and the Palestinian refugees. Jewish communities in the Middle East and North Africa region had undergone different experiences, not just between different countries, but even between various communities in the same country. 1948 was undoubtedly a turning point for a great number of them, and the Israel-Palestine conflict loomed over much of it. But casting these rich histories into one single-dimensional narrative is, in fact, a cynical strategy employed by the Israeli Right to avoid the need to address Palestinian claim for compensation on behalf of the Palestinian refugees.

Right-leaning Jewish organizations in the US, such as the San Francisco based JIMENA (Jews Indigenous to the Middle East), were quick to adopt the Israeli ready-made mold of “Mizrahi commemoration” and to blend it with the American practice of “awareness months.” Their website describes them as a non-profit “committed to achieving universal recognition to the heritage and history of the 850,000 indigenous Jewish refugees Arab from countries.” Similar ideas are expressed by Hen Mazzig, a charismatic yet controversial "Hasbarah" (pro-Israeli advocacy) speaker who tours North American campuses, to speak to students about his family's immigration from Tunisia and Morocco, his experiences as a gay officer in the IDF, and ways of combating anti-Israeli critics. Critics of Israel on US campuses are described by him as silencing Middle Eastern and North African Jews. Almost simultaneously, a call upon Jews to join a mass kaddish (a prayer traditionally recited in memory of the dead) on November 30th appeared on the pages of the Jerusalem Post. It remains unclear if these are grassroots initiatives or a well-orchestrated state-funded campaign. As the Jewish daily The Forward revealed, Mazzig is most probably a contractor paid by the Israeli government.

While asserting correctly that the heritage of Middle Eastern Jews does not receive equal space in the American-Jewish establishment, the kind of heritage that JIMENA and wishes to promote is equally superficial and shallow and is mostly comprised of stories of persecution and harassment followed by a final expulsion and a Zionist redemption. The historical narrative they are offering has less to do with the particular heritage and histories of these diverse communities and more to do with a politics of competitive victimhood and a “quid pro quo” argument about the nature of the Israeli-Palestinian conflict, in which Jewish refugees from the Middle East are cast as mirror images of the roughly 750,000 Palestinians who were expelled during the 1948 War.

As historians who dedicate their careers to research modern Jewish history, who believe in the importance of studying the histories of Middle Eastern Jewish communities alongside Ashkenazi communities, we welcome the intent to deepen and broaden our understanding of the place of these communities. Eurocentric assumptions, including our tendency to understand Jewish modernity writ large as coming out of the experiences of European Jews, provides a very narrow prism that fails to capture the Jewish historical experience in all its richness and diversity. It is about time that academic Jewish Studies programs would expand their curriculum and educate the students and the wider public about the culture and history of Mizrahi Jews, alongside other non-Ashkenazi communities such as the Yemenite Jews, Iranian (Persian) Jews, Greek and Balkan Jews, Caucasus Jews, Bukharan Jews and more. We also believe in the value and the importance of heritage months to raise awareness to and help advance our understanding of marginalized social groups. Notably, per the Library of Congress website, the American-Jewish Heritage month is celebrated in May, as part of an effort of Jews to be part of the “big American Jewish tent.” We raise our eyebrows, however, at what seems as what might be an attempt to hijack this noble cause for a partisan issue and a state-sponsored invented tradition. Jewish communities in the US should pay greater attention to the non-Ashkenazi stories alongside the Ashkenazi saga. But we wonder if a day of commemoration that is copy-pasted mechanically rather than reflectively by Jewish diaspora communities would serve that purpose.