The Whistleblowers of the My Lai Massacre

Howard Jones is University Research Professor of History Emeritus at the University of Alabama and the author of My Lai: Vietnam, 1968 and the Descent into Darkness (New York: Oxford University Press, 2017; paperback ed., 2019). He is the author of several books, including Mutiny on the Amistad, which Steven Spielberg used in making his movie “Amistad,” and Blue and Gray Diplomacy, which received an Honorable Mention for the Lincoln Prize from the Gilder Lehrman Institute of American History. He is now writing a book on Theodore Roosevelt. 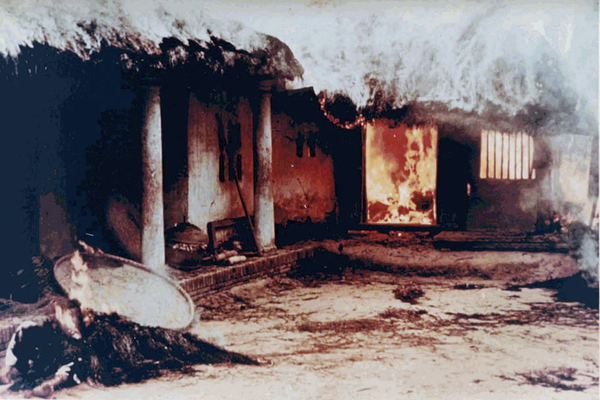 On March 16, 1968, about 200 American soldiers from Bravo and Charlie companies—part of the Americal Division’s 11th Infantry Brigade—entered the complex of South Vietnamese villages now known as My Lai, and killed 504 unarmed villagers, including elderly men, women, children, and babies. The “My Lai Massacre,” as Time magazine eventually called it, remained hidden from the public until November 1969—an 18-month cover-up that began almost immediately.

That it came out at all is because there was a whistleblower.

In fact there were three.

They witnessed a captain (Ernest Medina, commander of Charlie Company) shoot an unarmed and severely wounded Vietnamese woman with his M-16. Moments later they saw scores of Vietnamese bodies in a drainage ditch on the eastern side of the village of My Lai 4. American soldiers were standing on its edge, shooting those trying to crawl out. Thompson landed his helicopter and jumped out, demanding to know who was in charge. He was confronted by a second lieutenant (later determined to be William L. Calley).

A heated exchange followed. Outranked by Calley, Thompson left, believing the killing had stopped. As his helicopter ascended, however, Andreotta yelled into the intercom, “My God, he’s firing into the ditch again!” Calley had ordered his men to pull out but left a sergeant behind to shoot the wounded.

Thompson resolved to report the killings to the command base.

Turning back, he and his crewmates saw a squad of American soldiers in pursuit of a small number of Vietnamese civilians running toward an earthen bunker. Thompson set down his helicopter between the soldiers and the Vietnamese and left the engine running as he tried to find the officer in charge. Like Calley, 2nd Lieutenant Stephen Brooks refused to stop the killing. A shouting match ensued, after which Thompson stormed back to the helicopter and ordered Andreotta and Colburn to grab their machine guns while he coaxed the Vietnamese out of the bunker. If any of the American soldiers opened fire at him or the civilians, he declared, “shoot ’em!”

For several moments, the two sides glared at each other from across a fifty-yard divide as the propellers whirred loudly above. Brooks finally ordered his men to stand down. Thompson had meanwhile cajoled the Vietnamese out of the bunker—four adults (including two women) and five children—and herded them to the helicopter. Seeing there were too many to fit into his small craft, he radioed a Huey Gunship nearby, whose pilot agreed to transfer the Vietnamese to safety a mile or so away.

Thompson made one more pass over the ditch to see if anyone was alive. Andreotta spotted movement by a child and urged Thompson to land. While Thompson remained in the helicopter watching for Viet Cong, Andreotta slid down the bloody wall of the ditch and, while Colburn waited at its side, made his way through piles of bodies and dying Vietnamese begging for help to reach the child, a boy in shock and pinned beneath others but clinging to his dead mother. Andreotta picked him up and waded back to the edge of the ditch, where he lifted the boy to Colburn.

The three soldiers lay the youth across their laps as Thompson made a quick six-mile run to the hospital in Quang Ngai City.

At base headquarters, Thompson filed charges of mass killings, causing the command to order a cease-fire a little before noon that doubtless saved hundreds more lives.

Thompson’s allegations greatly unsettled the commander of Americal, Major General Samuel Koster, who was on the fast track to promotion and was already worried about a report that American forces had killed 128 Viet Cong but discovered only three weapons. The immediate question was whether the victims were unarmed.

Rather than file an atrocity report, Koster decided to keep the matter within the division by ordering an informal investigation aimed at collecting facts and then reporting back to him. He saw no need for an official inquiry, which would involve appointing an investigating officer, taking sworn testimony of witnesses, and submitting a final report to the Staff Judge Advocate of MACV (Military Assistance Command, Vietnam). As Young later emphasized to the Army’s Criminal Investigation Division, “One must be aware that a war crime has been committed before it can be reported.”

That statement was not correct. MACV Directive 20-4 required reports on “all alleged or apparent war crimes” inflicted by “US military personnel upon hostile military or civilian personnel.” Mere suspicion of a war crime required a formal investigation.

In accordance with Koster’s order, Young instructed Henderson to interview personnel who had been on the ground or in the air at My Lai and present an oral report to Koster within seventy-two hours.

Later that same morning, Henderson met with Thompson for about a half hour in Barker’s van. He also met with Colburn and a Huey gunship pilot, Warrant Officer Jerry Culverhouse, who both later testified that they confirmed Thompson’s charge of indiscriminate killing. Yet Henderson later claimed that he talked only with Thompson, who, he said, mentioned nothing about mass killings or of rescuing a small group of civilians from American soldiers. On March 20 Henderson presented his oral report: no evidence of war crimes. All soldiers interviewed denied knowledge of any atrocities.

Shortly afterward, the Americal Division awarded medals for heroism to Thompson, Andreotta, and Colburn for risking their lives in a crossfire between U.S. and Viet Cong forces to save sixteen Vietnamese children.

The Americal Division had fabricated an account of bravery aimed at silencing them. Two years later, a congressional subcommittee used the awards in an attempt to undermine the credibility of Thompson and Colburn by showing that they (along with Andreotta, who had died in battle a month after the massacre) had received medals for bravery in combat when no enemy was present.

Furthermore, all three Eyewitness Statements, on which the awards were based, were phony, written by someone in the Americal Division. When asked in congressional committee hearings about his Eyewitness Statements on behalf of his men, Thompson denied writing them and claimed that his signature on them was a forgery. He then signed a piece of paper showing the differences in the handwriting.

When I asked Colburn about his Eyewitness Statement on behalf of Thompson, he replied that he had never heard about such a document. Shown a copy of the Statement with his signature on it found in the Library of Congress, Colburn denied writing the Statement and declared that someone had forged his signature.

In the meantime, President Richard Nixon also sought to undermine the credibility of Thompson and others who had called My Lai a massacre. Over the Thanksgiving holidays of 1969, he met in his Key Biscayne retreat in Florida with advisers and expressed concern that the My Lai charges would accelerate the popular demand for an immediate withdrawal from Vietnam and interfere with his Vietnamization plan of phased withdrawal.

Nixon wanted members of Congress to discredit Thompson and other witnesses. Calley, Nixon declared, was “probably a good soldier” who might be “getting a bum rap.” The president ordered the establishment of a secret “Task Force—My Lai” to undermine press stories of a massacre as part of a “dirty tricks” campaign aimed at deflecting national attention to Viet Cong atrocities committed at Hué.

Evidence—and history—ultimately showed that Thompson’s original charges were correct and that an Army cover-up took place at every level of the Americal Division, all concealed from the Pentagon in Washington.

The truth had gradually emerged after Army and Congressional hearings, the Pulitzer-Prize-winning investigative work of Seymour Hersh, stories that appeared on television and other news media, and a series of courts martial in which both Calley and Medina confessed to wrongdoing. Calley was convicted for premeditated murder but paroled after less than four years of house arrest; Medina was acquitted in the spring of 1970, because of the two-year statute of limitations on charges less than war crimes.

All this started with a single whistleblower and his two crewmates.

On March 16, 1998, the 30th anniversary of the My Lai massacre, in a ceremony before the Vietnam Veterans Memorial in Washington, the Pentagon awarded the Soldier’s Medal to Thompson, Colburn, and Andreotta (posthumously)—the highest honor for bravery bestowed on a soldier in a non-combat situation. To emphasize the importance of moral and ethical leadership in combat, the Army incorporated a copy of Thompson’s award into its Field Manual of August 1999, highlighted in a boxed quote under the heading “W01 Thompson at My Lai.”

They paid the price for it, as whistleblowers usually do. Thompson died in 2006—“morally wounded and despondent,” according to Colburn, who sat at his bedside. Two years earlier, his long-time friend had been inducted into the Army Aviation Hall of Fame. Even this honor could not atone for his long ordeal: intimidation, name-calling, and blackballing by his peers; accused of treason by Americans both inside and outside the Army; flight assignments in the most dangerous areas without what Colburn thought was adequate protection; death threats in the mail and over the phone; mutilated animals dumped on his doorstep, a strained home life.

Not long after Thompson’s passing, Colburn received a rising number of death threats and, until his death in 2016, more customers than usual refused to patronize his business in Atlanta.

For more about My Lai, read Howard Jones' book on the massacre: 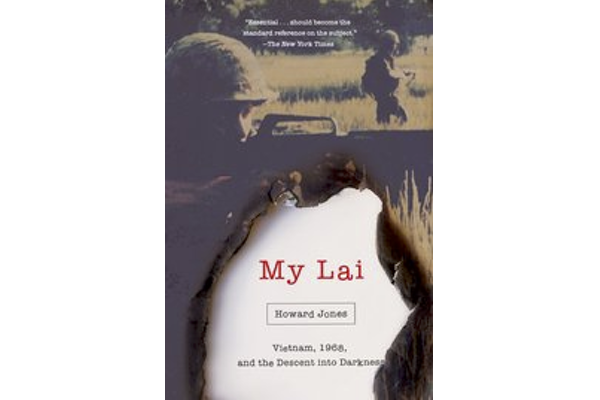