Who Will Be America's Brutus?

Michael A. Genovese holds the Loyola Chair of Leadership and is President of the Global Policy Institute at Loyola Marymount University. The author of 50 books, Genovese appears frequently on CNN, and other television interview programs. 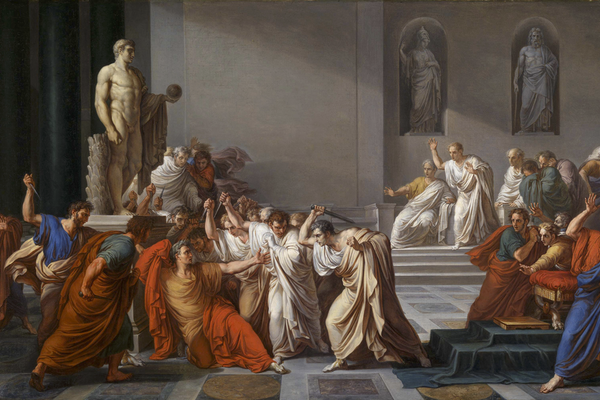 The Death of Julius Caesar by Vincenzo Camuccini

The inventors of the American political system knew stories of the Roman Republic well. They were aware that ambition and the hunger for power and glory led to its demise.  Over time, Republican Rome was replaced by an empire headed by autocrats and dictators. As the founders modeled their government, in part, on the Roman Republic, the fear that the new nation might follow the same path motivated the framers to build into the system a variety of checks and balances designed to make power counteract power and ambition counteract ambition. Their great fear, “tyrannaophobia,” led them to limit the powers of the presidency and bound the office to follow the rule of law.

Today, that system is under threat by a president who is doing violence to the rule of law and democratic norms. What can we learn from Roman history that might help us confront a runaway presidency in our age?

Fear of Caesar’s growing power led many Romans to rise up in opposition to the budding emperor.  While Rome maintained the paraphernalia of republican structures, real power was held by one man, Caesar. Brutus, one of the most respected men in Rome and a close friend to Caesar,  and Cato came up against the unrelenting ambition of Julius Caesar. Casesar’s distain for the rule of law, coupled with his highly skilled manipulation of public opinion and the military, eventually led to him being declared “dictator” for life. The Republic began to dissolve, only to be replaced by empire.

A number of dissatisfied Senators persuaded Brutus, that the rise of Caesar’s power meant the death of the republic. Torn within, Brutus eventually decided that the future of the republic was indeed in jeopardy, and that he would have to betray his friend. A band of Senate dissidents assassinated Caesar, and during the deed, Brutus was alleged to have said sic semper tyrannis (thus ever to tyrants).

The Framers lauded the efforts of Brutus, Cato, and other defenders of the republic who opposed the rise of imperial power in the form of Caesar and those emperors who followed him. Brutus and Cato became American symbols of liberty, much celebrated for their defense of republican government.  In 1778, General George Washington even had Joseph Addison’s play CATO, A TRAGEDY IN 5 ACTS performed for the troops at Valley Forge. In the early American republic, the names Brutus and Cato were often used as pseudonyms when writing about public affairs to gain gravitas with the reader.

Brutus was close to Caesar, thus his conundrum. Side with a friend, or with the republic? Brutus agonized over the decision. Was murder of a friend noble or a betrayal? Selfless or selfish? At the conclusion of Shakespeare Julius Caesar, the Bard has Antony, Brutus’ rival say,

This was the noblest Roman of them all.

All the conspirators save only he

Did that they did in envy of great Caesar.

He only in a general honest thought

And common good to all made one of them.

His life was gentle, and the elements

So mixed in him that nature might stand up

And say to all the world “This was a man.”

Of course, the result of the assassination of Caesar was a bloody civil war, and in the end Octavius (Augustus),  taking over as dictator as the republic all but disappeared. In this, we are left to ask, as Marjorie Garber does in SHAKESPEARE AFTER ALL:

…as Cassius and Brutus are soon to learn, they have killed the wrong Caesar. They have killed the private man, the one of flesh and blood. But the public man, the myth, lives on, after his death, and after theirs, and long after Shakespeare’s. “Julius Caesar, thou art mighty yet.” …The plebeians are a swayable chorus, a malleable, responsive audience to be played upon by the clever actor…” (p.419)

Caesar was dead, but the idea of a Caesar was very real and powerful, and lived on.  The people bowed to Caesar, honored and worshiped him, celebrated his accomplishments. They did not rise to defend the republic, they rose to cheer for their savior.  And Cassius, a leader of the rebellion against Caesar noted of the people:

And why should Caesar be a tyrant then?

Poor man! I know he would not be a wolf

But that he sees the Romans are but sheep.

He were no lion were not Romans hinds.

Is a republic worth saving if the people are sheep?  Was Rome merely biding time, waiting for its Caesar?

Today, we ask, who will be our Brutus? Who will save us from the threat to the republic posed by Donald J. Trump? In Trump we have a president who daily violates the norms of democratic behavior, the rule of law, the system of checks and balances. Have we a Caesar in our midst, imperial and imperious? Who will figuratively kill the beast that is doing such violence to the American system?  And is Trump the real problem or is Trumpism? After all, a willing segment of the public willinglyfollows behind the Pied Piper.Are we sheep who do not deserve a republic? Truly, the fault (dear Brutus) may not be in the stars but in ourselves, that we hunger to be led, to be dominated, to follow the strong leader.

At the end of the Constitutional Convention in Philadelphia, a woman asked Ben Franklin, “What is it Dr Franklin, a republic or a monarchy?” to which Franklin famously replied “A republic, if you can keep it.” Keep it indeed. It is not up to the president, it is up to us. Do we deserve a republic, and can we do the hard work to keep it?