What Can Historians Do? An Update from Historians for Peace and Democracy

News at Home
tags: activism, Historians for Peace and Democracy

by Margaret Power and Kevin Young

Margaret Power is a historian at Illinois Institute of Technology; specialist in Latin American and women’s history; longtime member of HAW’s leadership including three years as co-chair in mid-2000s.

Kevin Young is a Latin American historian at the U. of Massachusetts Amherst; organizer in antiwar, labor, climate justice, and immigrant rights movements; new Steering Committee member as of 2017. 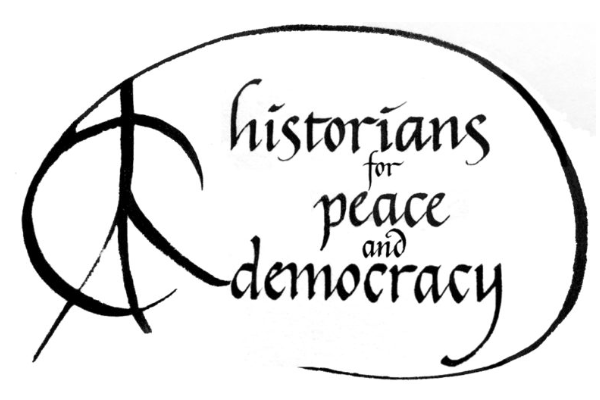 In May 2019 Historians for Peace and Democracy (H-PAD) convened a national strategy meeting of over 60 historians at Columbia University to discuss how we, as historians, could confront the current political crisis in the United States. Since that time, H-PAD has been engaged in integrating new members into the organization, setting up new working groups, and producing educational materials for public distribution.

Participants at the May meeting formed four working groups: Empire, Immigration, K-12, and Palestine. Each group has since formulated a mission statement. The Empire working group “will seek to connect with historians as citizens, educators, and scholars. A subcommittee of the working group, under the leadership of Molly Nolan, will prepare curricular materials on the topic of the US Empire. A second subcommittee, coordinated by Rusti Eisenberg and Prasannan Parthasarathi, will mobilize historians across the country to pressure Congress on issues of war, militarism and foreign policy.”

The Immigration working group “works to educate scholars, activists, and the general public about the history and current reality of immigrants in the Americas, most especially in the United States. It seeks to mobilize people to take action in support of immigrants’ human rights and for a just, humane immigration policy. We condemn all U.S. government policies that fail to welcome asylum seekers and refugees to the United States.”

The Immigration group plans to present a resolution at the January 2020 AHA meeting condemning affiliations between institutions of higher education and the detention/deportation apparatus embodied by ICE and Border Patrol. In order to be placed on the agenda, the resolution needs 100 AHA members to sign on by October 30. Please read the resolution and sign on. And if you are at the AHA meeting, please attend the business meeting to state your opinion.

The goal of the K-12 organizing committee is “to create and build partnerships between K-12 educators, academics and historians in order to affect the way in which history/social studies is taught and learned in the schools. In addition, the committee wishes to break down the artificial barriers that exist among and between K-12 teachers, history (and other relevant) departments and schools of education.”

The Palestine working group states that “we have come together to work to educate ourselves, the profession, and the general public to counter the misinformation and censorship of ideas by opening space for critical debate rooted in scholarly expertise. We will work together to challenge the Israeli occupation of Palestine, and U.S. support for Israel. We seek to mobilize people to take action to counter censorship and suppression of academic freedom in universities in the U.S.”

If you are interested in joining any of the groups, please contact the coordinators. They are Molly Nolan and Prasannan Parthasarathi for the Empire working group, Alex Aviña and Margaret Power for the Immigration working group, Alan Singer and Barbara Winslow for K-12, and Leena Dallasheh and Robyn Spencer for the Palestine working group.

Making history accessible to all remains our fundamental priority. One reason why U.S. policymakers and corporations can get away with their crimes is that most members of the U.S. public lack the relevant historical knowledge that would enable them to see through the deception. In the past two years our public history team has released short “broadsides” on historical topics of interest to the general public. In the last few months we have published four new broadsides: “Puerto Rico: A U.S. Colony in the Caribbean”; “Our Debt to Central American Refugees”; and the two-part “Why the United States Is Not a True Democracy.” These, and all of our previous broadsides, can be found on our website.

In order to reach new audiences in the age of social media, H-PAD has also begun producing an exciting video series called Liberating History. These videos consist of short, accessible interviews that place current events in historical context. To date we have produced two episodes. In Episode 1, titled “Trump Administration Policy in the Middle East: A Cruel Continuity,” Irene Gendzier explains the historical roots of Trump’s policies toward Iran, Saudi Arabia, Israel/Palestine, and the rest of the region.

In Episode 2, “The Structure of Punishment: Crack and the Rise of Mass Incarceration,” Donna Murch traces the historical origins of the U.S. “war on drugs” and the system of mass incarceration that accompanies it, focusing on the racist and hypocritical policing of Black crack cocaine users. All videos can be accessed on our website and on our new YouTube channel.

If you would like more information about H-PAD, please visit our website or email us. There are many ways to be involved, for instance by writing a broadside, participating in a working group, or donating to help us produce more videos. We welcome everyone who agrees with our mission, whether professional historians, K-12 teachers, or non-historians with an interest in putting history at the service of movements for peace, democracy, and justice.