Kyla Sommers is the editor of the History News Network. 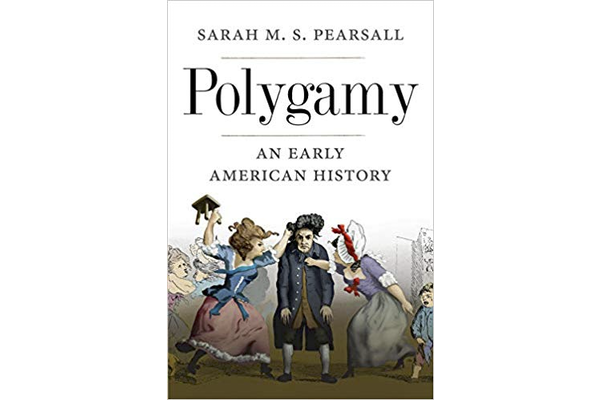 Sarah M. S. Pearsall teaches the history of early America and the Atlantic world at the University of Cambridge. She is the author of the prizewinning Atlantic Families: Lives and Letters in the Eighteenth Century. She lives in Cambridge.

Her latest book is Polygamy: An Early American History (Yale, Press, 2019). Dr. Pearsall answered some questions and elaborated on why marriage is a "building block of societies and empires."

KS: What is the stereotype of polygamy you’re working to correct?

KS: In the introduction, you write: "Polygamy controversies place us amid major events in early America because such clashes were about the organization and governance not just of house- holds but of societies, nations, and empires.” This is a very compelling passage. I wonder if you can elaborate a little – how was the structure of marriage such a powerful building block of societies and empires?

PS: Marriage does so much. To marry or not is a major decision. Whether you are married or not, you know this. Yet, perhaps for that very reason, people often do not think much about it as a structuring system; it feels timeless, underpinning the world as we know it. It brings states, religious authorities, communities, and families into the most intimate of realms, legitimizing children and ordering and transmitting property and inheritance. Sex and reproduction without marriage can be, and often have been, deemed illegitimate, a problem for individuals and society.  With marriage, sex becomes a blessed act, a means of family continuation, and a way of putting new souls into the world to serve dynastic, religious, and political functions.  Marriage also carries responsibilities and privileges, shaping gender, race, and rank.  Who can marry whom, and how their roles are defined within the marriage, are powerfully foundational in any society.  Nations and churches impose their views about which sex and families are legitimate, recognized, and clean, and which are not—or they try to do so anyway.  They do not always succeed.  Contesting changes in marriage forms has often been a way of expressing anxieties about larger social and cultural and religious changes, as seen most recently in same-sex controversies.  These debates have also shown how central the nation-state has become to the regulation of relationships, but that rise was not inevitable.  It was the product of centuries of contests over marriage.  We tend to take certain forms of it as natural.  Until recently, in the western world, that form was one man plus one woman.  Although things are changing, what I call “the infrastructure of monogamy” remains remarkably foundational in American society.  I became interested in those who saw lifelong indissoluble monogamy as the strange novelty in their world, as well as the investments colonial and national powers had in ensuring that their monogamous version of marriage was the only acceptable one.

KS: You deliberately preserve the agency of women in polygamous marriages, writing “Defiant defenses of plural marriage are worth taking seriously, even when—indeed, especially when—they puzzle us so much.” How did you approach taking the beliefs women in plural marriages seriously while also interrogating the patriarchal aspects of not just plural marriages but marriage writ large?

SP: I followed the women, especially the plural wives, themselves.  Sometimes they surprised me by doing things like defending polygamy.  In trying to figure out why they might have done so, I realized that I gained a new way of understanding their lives and worlds.  Too often people have not listened to the unexpected testimony of these wives.  It’s discomfiting, the idea that this “backwards” form of marriage might have served their needs sometimes.  In addition, the lack of first-person accounts by most of them makes it fatally easy to ignore their perspectives.  Most of the sources we have for these women were left by those keen to stamp out their marriages (missionaries and secular authorities) or by the men who benefitted most obviously from the system themselves.  This situation meant I had to “read against the grain.”  The women themselves lived in these marriages, and they knew firsthand how oppressive they could be.  Yet these women also made lives for themselves and their children, responding to the challenges of change, colonialism, and nation-building in creative and innovative ways.  Increasingly, women across a range of cultures were better able to express their sentiments in lasting ways.  Some of them condemned only polygamy, but some also questioned marriage itself and the ways that it shaped gender relations.  Polygamy for them was not a problematic outlier against a great system of monogamy which is how many male thinkers on polygamy framed it, especially in the age of Enlightenment. For at least some women, polygamy represented merely an extreme version of the inequalities they rightly identified in the monogamous Christian marriages of their day.

KS: Your work is cross-cultural, discussing the differences between how different communities approached polygamy while also emphasizing that this was a broader phenomenon. Why was it so important to you to take a cross-cultural approach?

SP: “Monogamic marriage,” one political theorist asserted in an American magazine in 1855, was “one of the elementary distinctions…between European and Asiatic humanity,” the very foundation “of our liberty, of our literature, of our aspirations, of our religious convictions” as well as “one of the pre-existing conditions of our existence as civilized white men.”  Race, ethnicity, religion, and culture, as well as gender, have been vital to the history of marriage; this is a big, intersectional story, involving many different kinds of people.  Polygamy has been a code for inferiority, one connected with these variables.  Certain kinds of marriage defined certain kinds of people.  Polygamy claims helped to make modern understandings of race, culture, and religion, in ways which continue to underpin American commitment to “monogamic marriage.”  Yet polygamy has had defenders across all cultures, even among Christian ministers at points.  This is intriguing.  Moreover, examining polygamy reveals a great deal about the role of gender and sexuality in major transitions of colonialism, slavery, and the rise of the nation-state.  I hope that this book helps people to ponder what is “natural” in marriage as well as what “early America” looks like. It was not all pilgrims and planters. It had many faces, languages, and cultures. To investigate how individuals navigated disputes over households helps to illuminate the richness and diversity of early America, with women’s perspectives central.

KS: Finally, how can this book help us understand and think about the state of modern marriage and challenges to it from the increasing popularity of polyamory to the increasing age of first marriages?

SP: I did not write this book to argue that polygamy should be legalized; I wrote it to show how fundamental marriage, gender, and sexuality have been to larger processes of change and continuity, in ways not always fully appreciated.  Popular perspectives on gender and sexuality have shifted considerably in the last few decades.  It is therefore hardly surprising that marriage, too, has been undergoing alterations.  Polyamory seems an obvious offshoot.  Working on this book, and talking to many people about polygamy, it came to strike me as increasingly strange that people accepted “the infrastructure of monogamy” so unthinkingly.  I hope this book will prompt further reflection on these issues.  To me, it’s good if people think about how best to define marriage, and what its wider meanings are for themselves and their society. Yet, with all the modesty of a historian who mostly thinks about the past, not the future, I might suggest a couple of cautions.  Patriarchal privilege tends to bob to the surface in most systems of marriage; it’s easy to see how polyamory might go down that route.  Second, as queer people learned to their cost and plenty of others over the centuries have, too, living in a family unrecognized by the state, not having privileges of health insurance and next of kin status and inheritance, is a challenging way to live.  We might not all love state authority here (as people divorcing sometimes find), but we should recognize it for what it is: a force that shapes all of our lives, whether we are married or not.  Marriage and its varieties connect individuals with that power, as I have tried to demonstrate in this book.