The History Briefing on Impeachment: How Historians Covered this Week's Top Story

Jonathan Montano is an intern at the History News Network. 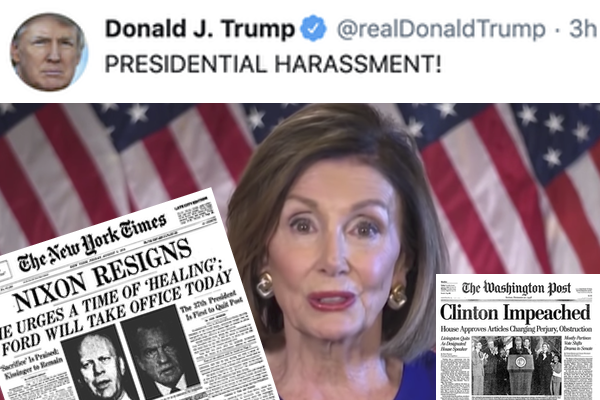 Editors note: This is the first article in a new History News Network series: The History Briefing. Contributors will historically contextualize the week's top headlines by summarizing how different historians have added their unique perspective to enhance news coverage. This week, we begin by examing how historians have enhanced our understanding of Nancy Pelosi's decision to open an impeachment inquiry.

On Tuesday afternoon Nancy Pelosi opened an impeachment inquiry against President Donald Trump. The media responded appropriately by producing nonstop coverage of impeachment proceedings. But not all journalism is the same. Impeachment is a nuanced subject that has a complicated history. Let’s take a look at how historians are adding to the impeachment story.

Jonathan Katz, a historian and journalist, wrote a compelling story that traces impeachment inquiries through history. He convincingly argued that both inquires and charges overwhelmingly result in damaged presidencies. In some cases – such as John Tyler, Andrew Johnson, and Richard Nixon – their presidencies ended entirely, even without formal charges or convictions. Katz also pointed out that the president’s political parties suffered as a result. He highlighted several instances in which political parties failed to elect presidents or gain a majority in Congress in the decade following impeachment. His argument presented a compelling case and added an important distinction to the dominant news story: impeachment historically has a very negative impact on presidents and their parties. His historical perspective is important because the media is often focused purely on the contemporary while failing to understand historical precedence.  Katz does precisely the opposite, suggesting that President Trump should be nervous.

Gillian Brockell of the Washington Post’s Retropolis – a historically informed section of the newspaper – wrote an intriguing comparison between Watergate and the current investigation. Her article highlights an important nuance that many journalists miss: the document released by the White House is a memorandum – a fancy word for a rough document – not a verbatim transcript of the phone call. Her journalism drew a distinct parallel that highlighted the Nixon Administration releasing a rough memorandum as well. She emphasized that his memorandum and the actual transcripts read quite differently and had serious consequences for then President Nixon. Her historical comparison teaches an important lesson to this breaking news story: conclusive evidence cannot be drawn from rough draft documents. Her nuanced understanding of history conclusively portrayed to the public that we need original documents, not summaries released by the administration itself.

Kevin Kruse and Julian Zelizer, both of Princeton University, wrote another piece that connects Trump to Nixon. They open their story with convincing evidence that the Trump investigation is a much closer parallel to Nixon rather than Clinton, as many had suggested. Their argument also parallels that of Katz, by noting that the impeachment process impacts public opinion. Many journalists have failed to make this distinction and have rather focused on current public opinion polling. Their article offers nuance to the media discussion by establishing a fleshed out comparison between Trump and Nixon while contrasting them against Clinton. Their piece – which was written before Pelosi’s inquiry – urges Democrats to proceed with impeachment because, in the past, it has strengthened their party and the nation.

Ronald Shafer, again for the Washington Post Retropolis, wrote the often untold story of President Tyler’s impeachment inquiry, the first in American history. Tyler, unlike Trump, was being investigated by his own Whig party because of his unwillingness to cooperate. While that is not the case for Trump, the article alludes to an important distinction: a partisan struggle and a deeply divided country. Tyler’s inquiries did not result in charges because of the divide, a conclusion that would align with much reporting that warned against Trump’s impeachment. The House Committee did not suggest impeachment because of “the current state of public affairs”. Shafer’s telling of Tyler’s story gives the reader a key insight to what could happen to the current President because of today’s partisanship. But as Katz reminds us, the impeachment process resulted in Tyler not seeking reelection.

Sidney Blumenthal – a fellow at the Society of American Historians – wrote a comparison between Nixon, Clinton, and Trump. The most comprehensive comparison of the list, Blumenthal analyzes public opinion data, the timeline of events, and indictments of those close to the presidents. He concludes that, because of public opinion data, the Clinton case is not an adequate predictor of the upcoming Trump impeachment. He focused on Trump’s unprecedentedly low approval ratings to prove how much of an anomaly this case is. In conclusion, he uses Nixon’s deteriorating approval ratings during the trial as evidence of a scary future for Trump. It is his belief that Trump faces far worse circumstances and a similar demeanor to Nixon, who had a much stronger case than our current president. Blumenthal’s account adds interesting parallels between the three modern cases for impeachment, their public support, and how the plan on combatting evidence to the public. It is Blumenthal’s belief that Trump should be nervous.