Does Our Climate Crisis Make the 2020 Election Our Most Crucial One Ever? 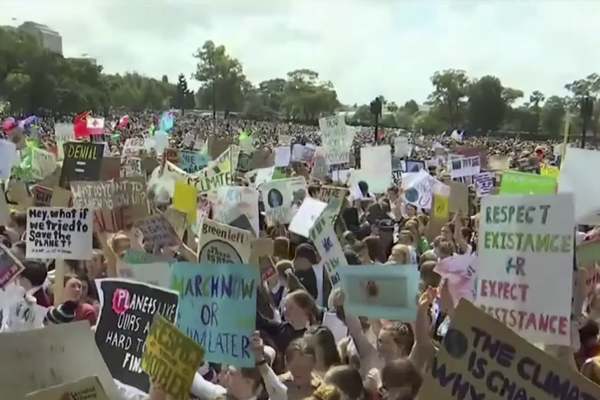 Friday’s Global Youth Strike for Climate, Saturday’s UN Youth Climate Summit, this Monday’s UN Climate Action Summit. Clamoring calls for climate action surround us this September weekend. In next year’s presidential election, no issue will be more dire. Who can doubt that four more years of President Trump and Mitch McConnell will all but ensure future climate catastrophes? Thus, the election is likely our most crucial one ever.

But, before addressing that conclusion, let’s briefly consider our most important past elections, what was at stake in them, and what might have happened if they turned out differently. Then we’ll examine the planet-threatening danger of our present climate condition, which has been greatly worsened by Trump. Finally, we’ll look at possible outcomes resulting from our past and present situations, including this weekend’s outpouring of youth climate concern.

Although historians differ on our most crucial presidential elections, four of them seem especially significant: those of 1800, 1860, 1932, and 1940. In 2007, Harvard historian Jill Lepore wrote that the 1800 election pitting John Adams against Thomas Jefferson “is the most important election in American history.” In 2012, another scholar, David Mayhew of Yale, considering various criteria, selected the election of 1860 as the most important one, followed by that of 1932. Finally, FDR scholar Paul Sparrow considers the 1940 election our most important: “If you step back and look at its impact on the world, no election was more important.”

But why these four? Regarding 1800, Lepore notes that the election “marked the first transition of power from one party to another. It led to the passage, in 1804, of the Twelfth Amendment, separating the election of Presidents and Vice-Presidents. . . . It might have—and should have—spelled the end of the Electoral College.” Mayhew concurs that 1800 “settled the point that the incumbent party would accept a loss and hand power over to the opposition--thus ensuring that we would continue to have elections. He also notes that Jefferson’s victory “ended Federalist domination.”

Mayhew does not include the 1800 contest as one of the two most important, perhaps because hiscriteria for deciding our most important elections includes “What if the other guy had won?” One could argue that the election of Adams to a second term would not have been a catastrophe. After all, he had been Washington’s vice-president for two terms and then president for four years, and presidential scholars rank him fairly highly--the Siena College Research Institute, Presidential Expert Poll of 2018, for example lists him as 14th best among 44 presidents.

Lincoln’s 1860 election was followed by the Civil War and the end of slavery. If any of Lincoln’s three main opponentshad won, secession, the civil war, and the abolition of slavery would likely not have immediately followed. But who can say for how long? The continuation of American slavery into the twentieth century, for example, would have been highly unlikely. If Lincoln had not been elected in 1860, it is impossible to know what post-1860 U. S. history might have looked like (see here for some informed speculation on the question.)

In 1932, Franklin Roosevelt (FDR) was elected in the midst of the Great Depression and thereafter created New Deal Policies to counter its effects. We cannot know precisely what Herbert Hoover would have done if reelected in 1932. Kenneth Whyte’s recent biography Hoover indicates that he was a more complex figure than often portrayed and not just a rigid defender of laissez-faire economic policies.

But the 1932 election was not just important for providing the gateway to the New Deal policies that had such a lasting effect on American life, but also because it made possible the beginnings of the Roosevelt administration that lasted until 1945 and continued to affect U. S. politics ever since. Without his success in 1932, FDR might not have been the Democratic candidate in 1940, the year of our fourth important election.

Again, as in earlier elections, we cannot know what would have happened if FDR would have been defeated in 1940. His chief opponent, Republican Wendell Wilkie, was no isolationist, and the likelihood of the U. S. becoming involved at some point in WWII against Germany and Japan would have remained. (Another interesting possibility, as Philip Roth explored in The Plot Against America, is what would have happened if Charles Lindbergh had been the Republican candidate and then president.)

Thus, it is largely due to the uncertainty of what would have happened if Jefferson, Lincoln, and FDR had not been elected that it is difficult to compare and contrast the elections of 1800, 1860, 1932, and 1940 to the upcoming one in 2020. In addition, we do not yet know who the Democratic candidate will be. And although it seems highly likely that Trump will be the 2020 Republican candidate, even that is not a certainty. Hence, my contention that the 2020 election is only “likely to be” our most crucial one ever.

And “likely” primarily because of our present climate condition. The environmental harm Trump has heretofore done is incalculable (valuable efforts to keep track of this appalling record can be found here and here), and a continuation of such policies in a second term would be highly likely. Conversely, all major Democratic candidates have pledged to pursue policies to help us prevent climate disasters.

Of essence then is the vital importance of our climate crisis. To describe it adequately in a brief essay is almost impossible. But the opening words of David Wallace-Wells’ The Uninhabitable Earth (2019) are a start: “It is worse, much worse, than you think. The slowness of climate change is a fairy tale.” Moreover, the recent words of writer Jonathan Franzenare alarmist, but not improbable: “If you’re younger than sixty, you have a good chance of witnessing the radical destabilization of life on earth—massive crop failures, apocalyptic fires, imploding economies, epic flooding, hundreds of millions of refugees fleeing regions made uninhabitable by extreme heat or permanent drought.”

Consider the observations made by the 13 federal agencies in the U.S. Global Change Research Program (USGCRP)’s 2018 report to the U. S. Congress and President Trump. “High temperature extremes and heavy precipitation events are increasing. Glaciers and snow cover are shrinking, and sea ice is retreating. Seas are warming, rising, and becoming more acidic, and marine species are moving to new locations toward cooler waters. Flooding is becoming more frequent along the U.S. coastline. Growing seasons are lengthening, and wildfires are increasing.” Moreover, unless there are “substantial and sustained reductions in global greenhouse gas emissions . . . substantial net damage to the U.S. economy [will occur] throughout this century, especially in the absence of increased adaptation efforts. With continued growth in emissions at historic rates, annual losses in some economic sectors are projected to reach hundreds of billions of dollars by the end of the century.”

Since the above report was issued in November 2018, the unrelenting effects of climate change have continued to pummel us--and not just us in the USA, but globally. July 2019 was the hottest month recorded in history, with record-breaking heat in such countries as Germany, France, Belgium, and the Netherlands. Ice melted in record-breaking amounts in Greenland, contributing to rising sea levels. On September 1, Hurricane Dorian began destroying parts of the Bahamas, leaving some 70,000 people homeless. In September, Time devoted a whole issue to climate,  describing it as “thebiggest crisis facing our planet.” It dealt with it not just as a U. S. issue, but, as it should be, a global one. Various articles addressed the crisis as it affected such areas as Africa, Latin America, Antarctica, the Pacific Islands, and Jacobabad, Pakistan “the hottest city on earth.”

Of course, President Trump does not bear the main responsibility for all the negative climate news, but it is difficult to think of any other human who has more impeded global efforts to address the crisis. Even the business-friendly Forbes Magazine opines thatTrump’s climate-change policies have been nightmarish—see its essay “Trump Ignores The Impacts of Climate Change at His Peril—And Ours.”

In April 2017, Bill McKibben--founder of 350.org, which has become a leading voice in the environmental movement--predicted that the effects of Trump’s policies “will be felt . . . over decades and centuries and millenniums. More ice will melt, and that will cut the planet’s reflectivity, amplifying the warming; more permafrost will thaw, and that will push more methane into the atmosphere, trapping yet more heat. The species that go extinct as a result of the warming won’t mostly die in the next four years, but they will die. The nations that will be submerged won’t sink beneath the waves on his watch, but they will sink.”

In his recent lead essay in the Time issue devoted to climate, McKibben imagines what positive developments could happen before 2050. They begin with the defeat of Trump in 2020, and the election of a new president. "In her Inaugural Address, she pledged to immediately put America back in the [2015] Paris Agreement [which Trump had withdrawn from]—but then she added, “We know by now that Paris is nowhere near enough. . . . So we’re going to make the changes we need to make, and we’re going to make them fast.”

Wishful thinking? Yes, but we need hope. In the same Time issue, former Vice President Al Gore also expresses hope and writes that it “stems largely from the recent, unprecedented groundswell of youth activism that has raised public consciousness to new levels and is pushing political leaders to develop bold and ambitious ideas to confront this challenge.” Youth activism like the kind currently being globally displayed also encourages McKibben, but he realizes how tough the struggle ahead will be.

The next major battle, and perhaps the most important one of our lifetime, will be the 2020 presidential and congressional elections. Its results could mark a major turning point in our climate struggle.