Searching for El Dorado: The Colonial Fantasy of the Amazon 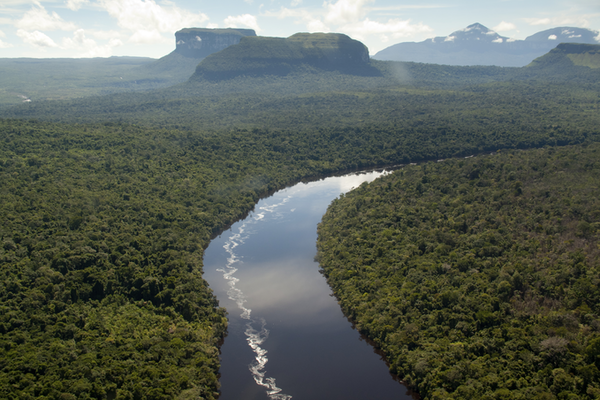 When Walter Raleigh wrote back to his London financiers about his 1595 colonial incursions into the area around South America’s Orinoco River, he described the region and its rainforest as an earthly paradise. Writing of the northern Amazon region in The Discovery of Guiana, Raleigh says that “we passed the most beautiful country that ever mine eyes beheld.” The courtier, explorer, poet, and exploiter gave litanies of the continent’s flora and fauna, while also imbuing his subject with the quality of the fantastic. In Raleigh’s estimation (or at least what he presented to his creditors), this land wasn’t merely lush, it was unsullied; it wasn’t simply fecund, it was virginal; it wasn’t just pristine, it was paradisiac. For Raleigh, as for the Spaniards who preceded him, the language best used to describe the American tropics wasn’t one of just geography, but rather something which required a religious rhetoric – the vocabulary of Eden.

Even the foliage seemed endowed with transcendent meaning, for the “grass short and green, and in divers parts groves of trees by themselves, [were] as if they had been by all the art and labour in the world so made of purpose.” But Raleigh wasn’t looking for divinity, he was looking for gold, specifically in the promise of the mythical city of El Dorado. The legend was perhaps loosely based on the actual Muisca people of Colombia who were adept in metallurgy and gold-working, but more importantly Raleigh’s obsession with El Dorado reflects much of how Europeans have understood South America in general and the Amazon in particular – as a place simultaneously Edenic and ripe for exploitation, a dream based on a half-truth and transformed into a nightmare by colonialism. The horrible irony of calling an earthly place a paradise is that we can only understand such Edens by recourse to paradise lost.

The Amazon has more biodiversity in plant and animal life than any other place on Earth; its dense forests regulate the planet’s climate, and it represents a storehouse of the world’s biological legacy that goes back 55 million years. So vital is the Amazon’s role in the regulation of Earth’s ecology that if it were to disappear, the implications would be literally apocalyptic. Few other locations would deserve to be called “paradise” as much as the Amazon, and yet the cruel paradox is such idealization is partially what’s responsible for the refusal to be stewards of the forest. Instead, the Amazon is considered  a storehouse for human desire and fulfillment, whether in the form of Raleigh’s gold, or the acres of forest being cleared today for cattle ranchers. There is a direct ideological thread that runs from the early explorers of the Caribbean and South America—men like Raleigh and Francisco de Orellana, the conquistador who fist traversed the length of the Amazon—and the current environmental catastrophe unfolding in the Brazilian rainforest as fire burns its way across the length of a land which was once called paradise.

The more than 74,000 wild fires this year that have been enabled by the rapacious Laissez-faire policies of Brazilian president Jair Bolsonaro threaten to immolate that ecosystem on which so much of the Earth’s delicate maintenance depends while the toxic smoke turns the hemisphere’s largest city Sau Paulo’s days into night. In The Atlantic Robinson Meyer explains that “During his campaign, [Bolsonaro] promised to weaken the Amazon’s environmental protections – which have been effective at reducing deforestation for the past two decades – and open up the rainforest to economic development.” As a result, since January over 1,330 square miles of rainforest have been lost to fires purposefully ignited so as to clear land for ranchers, an 80% increase since last year. Such an area is, as reported by Eliana Brum in The Guardian, equivalent to the loss of an area the size of Manhattan every day; of the London metropolitan area every three weeks.

These fires were intentionally set and are indeed the fulfillment of Bolsonaro’s campaign promises (that they followed recent legal victories for indigenous Indians regarding the use of their own land isn’t a coincidence either). As Brum notes, “Bolsonarism’s number one power project is to turn public lands that serve everyone – because they guarantee the preservation of natural biomes, the life of native peoples and regulate the climate – into private lands that profit a few.” Such burning is not a repudiation of the ethos of a Raleigh, but rather the final fulfillment of that exploitive colonial nightmare. Bolsonaro might be speaking with his characteristic mocking vitriol when he said “I used to be called Captain Chainsaw. Now I am Nero, setting the Amazon aflame,” but there is still a malignant truth in what he’s saying. Brum writes that “Bolsonaro is not just a threat to the Amazon. He is a threat to the planet, precisely because he is a threat to the Amazon.” With the rainforest’s central role in regulating the oxygen of the planet, and thus the climate of the planet, Bolsonaro’s polices in the Amazon and his inaction in the face of the fires could have catastrophic implications, especially at this ecological hinge moment in history. As superficially different as fire may be from genocide and ethnic cleansing, the collapse and deaths that could result over the long-term from Bolsonaro’s Amazon policy could ultimately end up ranking him alongside history’s worst monsters.

Bolsonaro is a dangerous part of the same trend towards authoritarianism and illiberalism that is exemplified in politicians from Vladimir Putin and Matteo Salvini, to Viktor Orban and Donald Trump. Such authoritarianism is in some sense baked into the worst parts of the Western project, and Bolsonaro’s privatization schemes for the Amazon, which Meyer’s reminds us is a “store of carbon… fundamental to the survival of every person,” is a continuation of the colonialism which started a half-millennia ago. Brum writes that for “500 years, this has been a place of ruins. First with the European invasion, which brought a particularly destructive form of civilization… More recently, with the clearance of vast swaths of forest and all life within it.” It’s worth noting that one ideological current which connects colonialism five centuries ago with unfettered capitalism today is the deployment of a particularly gendered language. When Raleigh espied Guyana he spoke of it as not just paradise, but specifically as a woman. Land which had been home to indigenous people for millennia, and a profound diversity of life for millions of years, was now understood as a “country that hath yet her maidenhead, never sacked, turned, nor wrought; the face of the earth hath not been torn… never conquered or possessed.”

Literary scholar Roland Greene writes in his study Unrequited Conquests: Love and Empire in the Colonial Americas that early modern explorers used the language of sexuality to justify the commodification of their “discoveries.” Greene notes that during the early modern period, the discourse about the Americas exemplified “the semantic and moral disruptions that take place in love poetry around desired female objects.” There is a connection between Raleigh’s rhetoric of paradise and his vocabulary of gendered conquest – both types of language posit the land in idealized terms, and both envision a privilege on the part of the colonist to exploit that land. Most importantly, such language barely conceals its rage and violence; Raleigh’s explicit conjunction of a virginal land that “hath yet her maidenhead” and which has been “never conquered or possessed” is a clear call to do just those things. Again, the line between Raleigh and a Bolsonaro who once told an elected congresswoman that “I would never rape you, because you don’t deserve it” is horrifically clear, as is the reality that for all of their differences, the new crop of illiberal authoritarians blighting global politics are united in rank misogyny.

What’s to be done in the immediate present is to try and put out the Amazon fires by any means necessary. The paltry twenty million dollars offered by the G7, which it’s not even clear Bolsonaro will accept, is at least a start. It’s unclear what the Brazilian military, tasked by Bolsonaro with putting out the conflagration after international pressure was put on his government, has accomplished much. More locally and immediately, for those readers who wish to contribute, the Earth Alliance has an Amazon Forest Fund where 100% of the proceeds will go to fighting the fire.

But even after the flames have been quenched, there is the issue of abolishing the very discourses that have brought us to this moment; the rhetoric of exploitation, ownership, and rape that has facilitated the Amazon’s burning. Raleigh may have thought of the forest as virginal and dismissed its previous inhabitants as merely part of the natural landscape, but the reality is that the indigenous lived in oftentimes quite sophisticated civilizations that had a complex relationship to the Amazon based in mutual stewardship. Journalist Charles C. Mann writes in 1491: New Revelations of the Americas Before Columbus that “some anthropologists say [that] the great Amazon forest is also a cultural artifact – that is an artificial artifact.” But not all artificial artifacts are the same, for in the forest currently being destroyed there are the ruins of those with different values who were able to consistently live within that nature. As the Amazon burns, what lessons are being lost with it?