Jason H. Silverman, Ph.D. is Ellison Capers Palmer Jr Professor of History Emeritus at Winthrop University.  He is the author or editor of eleven books most recently, Lincoln and the Immigrant (2015), the only book length study of the subject.  His current book is Lincoln’s Magician. 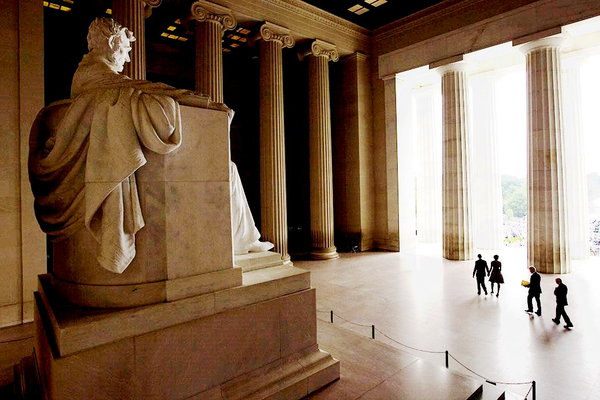 Last month, President Donald Trump celebrated his narcissistic Fourth of July at the Lincoln Memorial. It is not surprising that  Trump chose this location as he makes it a point to invoke Abraham Lincoln’s name whenever it suits his purposes or his distorted view of history.  Apparently, however, he is totally unfamiliar with Lincoln’s legacy on immigration.

Whereas Trump espouses a “go back where you came from” ideology and wants to slam the door shut on immigrants, Abraham Lincoln consistently articulated an economic philosophy that relied heavily upon immigrant labor.

In his earliest speeches, Lincoln saw immigrants as farmers, merchants, and builders who would contribute mightily to the nation's economic future.

"I again submit to your consideration the expediency of establishing a system for the encouragement of immigration. . . .While the demand for labor is thus increased here, tens of thousands of persons, destitute of remunerative occupation, are thronging our foreign consulates and offering to immigrate to the United States if essential, but very cheap assistance, can be afforded them. It is very easy to see that under the sharp discipline of the Civil War, the nation is beginning a new life. This noble effort demands the aid and ought to receive the attention of the Government."

This is far from Trump’s characterization of immigrants as  criminals, rapists, and drug dealers that Trump has called them.

Whereas Trump has fought the Courts, his own Justice Department,  and just about everyone else to keep immigrants out, Lincoln’s endorsement resulted in the first, last, and only bill in American history to actually encourage immigration.

Symbolically and appropriately, Lincoln’s Act to Encourage Immigration became law with Lincoln's signature on July 4, 1864, exactly 155 years before Trump’s narcissist celebration of the holidaythis past year.  President Lincoln's message and legislation on this subject seemingly begun a wave of support for federal and other action to encourage immigration which lasted for decades.

So strong was feeling on this matter that the 1864 platform of the Republican Party (running as the Union Party) noted, "That foreign immigration, which in the past has added so much to the wealth, development of resources, and increase of nations, should be fostered and encouraged by a liberal and just policy." Compare that to the Republican Party of today!

The Bill was amended and strengthened after Lincoln stated in his Annual Message to Congress on December 6, 1864, "The act  . . . seems to need Amendment, which will enable the officers of the government to prevent the practice of frauds against the immigrants while on their way and on their arrival in the port, so as to secure them here a free choice of vocations and places of settlement."   Now envision the detention camps of the Trump era.

Lincoln’s death and the ultimate repeal of Abraham Lincoln's Act to Encourage Immigration could not remove the effect it had upon immigration. Its important influence foretold the massive flow of immigration to the U.S. in the following decades. The secondary effects of the act, such as the popularization abroad of another of Lincoln's landmark laws, the Homestead Act, encouraged thousands of immigrants to settle as farmers in the Midwest and West.

Though he did not live to see the completion of his dream, Lincoln deserves credit for initiating a plan that personified Emma Lazarus's words long before they were memorialized on the Statue of Liberty.  Trump, meanwhile, represents the repudiation of those words.

Lincoln’s humble origins were never far from his thoughts and his belief that everyone deserved the opportunity that America affords permeated virtually all of his beliefs.  On the other hand, Trump, born with a silver spoon in his mouth, stands in direct contrast to Lincoln’s background and compassion.  Donald Trump seemingly scorns the common man or middle class.  He reviles the Constitution and the Declaration of Independence whereas Lincoln stated quite explicitly, if not prophetically:

“Wise statesmen as they were, they knew the tendency of prosperity to breed tyrants, and so they established these great self-evident truths, that when in the distant future some man, some faction, some interest, should set up the doctrine that none but rich men, or none but white men, were entitled to life, liberty, and pursuit of happiness, their posterity might look up again to the Declaration of Independence and take courage to renew the battle which their fathers began – so that truth, justice, mercy, and all the humane and Christian virtues might not be extinguished from the land; so that no man would hereafter dare to limit and circumscribe the great principles on which the temple of liberty was being built.”

For a president already prone to depression, Trump’s America would send Lincoln into the “hypo” (for hypochondriasis) as he called it.  He would be appalled that the Republican Party stands by idly and refuses to hold Trump accountable for virtually all that Lincoln stood for.

In short, the Lincoln majestically sitting behind Trump during the July Fourth event earlier this month weeps for what is now lost.