What to the Refugee Child is the Fourth of July? 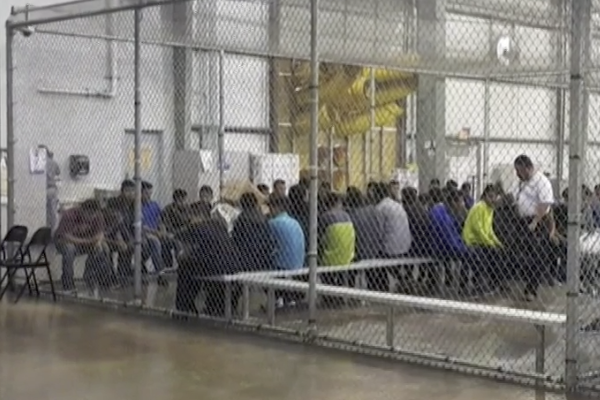 What to the refugee child is the Fourth of July? How will so-called Independence Day be celebrated by the children whose families are escaping violence in Central America, only to be placed in the concentration camps of the Ursula Detention Facility, the Port Isabel Detention Center, Fort Sill where Japanese-Americans were once unjustly imprisoned, or the Tornillo tent city? For there is something obscene in the fireworks this year, something sacrilegious in singing the Star-Spangled Banner or God Bless America, something profane about the endless bromides concerning the wisdom of our founders. Something nauseating in the orchestral and pyrotechnic spectacle over the National Mall, presided over by a man elected by a minority of voters, who panders to his base with the abject inhumanity of family separation at the border, of denying migrant children – children – the necessities of basic hygiene.

Something heretical in valorizing a nation led by a man who crowds over a thousand people into concrete spaces designed for a hundred, where the cost of imprisoning a child is $750 a day but Justice Department attorney Sarah Fabian can claim before a judge that its “safe and sanitary” to deny people showers, soap, and toothpaste. How can you enjoy your burgers and hotdogs, baseball games, picnics with your family, when children are given water tainted with bleach and forced by ICE agents to defecate on themselves in concentration camps run by for-profit prison companies supported by your tax dollars? What to the refugee is the Fourth of July? Bitterness, ash, wind, and empty promises. What to the child imprisoned in an American concentration camp is Independence Day? Cruelty and lies.

So if you’ve avoided accounts from human rights lawyers about physically and sexually abused children, about parents and their babies drowning in the Rio Grande, about the spread of disease among a captive population who’re only imprisoned because they dared apply for asylum after American foreign policy had made their own nations unlivable, then I implore you to look. Civil rights attorney Warren Binford recounted to Isaac Chotiner of The New Yorker what she witnessed at one Texas detention center, where there was a lice outbreak in a cell that held 25 children. Binford says that the children “were given a lice shampoo, and the other children were given two combs and told to share those two combs… and brush their hair with the same combs.” After the children – children – lost the lice comps, the “Border Patrol agents got so mad that they took away the children’s blankets and mats. They weren’t allowed to sleep on the beds and they had to sleep on the floor” as punishment. Dara Lind of Vox reports on the “dangerous overcrowding” of these camps, describing instances where “up to 900 people being held in a facility designed to hold 125.”

Physician Lucy Servier visited the Ursula detention center after a flu outbreak sent five infants to a Neonatal unit; her first-hard report was quoted by Serena Marshall, Lana Zak, and Jennifer Metz of ABC News. Servier witnessed children kept in “extreme cold temperatures, lights on 24 hours a day, no adequate access to medical care, basic sanitation, water, or adequate food.” The imprisoned children are not allowed to wash their hands, which Servier said was “tantamount to intentionally causing the spread of disease.” Adolfo Flores of BuzzFeed News reports that “Breastfeeding mothers detained by US Border Patrol are only receiving half the amount of water they need, and hungry babies are not getting enough food.” Binford is also quoted by ABC News, the authors writing that conditions at the Clint facility “included infants and toddlers sleeping on concrete floors… guards punishing the children by taking away sleeping mats and blankets, and guards creating a ‘child boss’ to help keep the other kids in line.” Servier concludes by saying that the “conditions within which they are held could be compared to torture facilities.” What else are we to call this?

In this piece, I’ve borrowed my initial rhetoric from the justly celebrated July Fourth Oration of Frederick Douglass, delivered the day after the holiday in 1852 to the Rochester, New York Ladies’ Anti-Slavery Society. Historian David W. Blight writes about the author in Frederick Douglass: Prophet of Freedom, that he “constantly probed the ironies of America’s contradictions over slavery and race,” and rarely is that more spectacularly the case than in his 1852 address. Douglas didn’t equivocate, and neither should we. If you’ve been following the news from the border, you’ve no doubt read the debates over the terminology to describe these crimes. In a tweet earlier this month, Democratic New York representative Alexandria Ocasio-Cortez maintained – accurately – that the United States government was “running concentration camps” at the border. While she found supporters for her position (including scholars on the subject), Ocasio-Cortez was also predictably lambasted by both Democrats and Republicans, with Liz Cheney, Republican Wyoming representative, and daughter of the author of the Bush administration’s torture policy, sanctimoniously declaring that her colleague should “spend just a few minutes learning some actual history.”

So let’s do that. Concentration camps are not synonymous with Nazi extermination camps, and as a punitive method their use can be traced back to the British in the Boer War. The term is appropriate to describe the U.S. internment of Japanese-Americans during the Second World War, and any number of other instances as well. This might not be the “actual history” Cheney had in mind, though one imagines that once you’ve reached the level of defense which maintains that you’re at least not as bad as Adolf Hitler, perhaps policy has gotten out of hand. As Holocaust scholar Waitman Wade Boern explained to Jack Holmes of Esquire, “Things can be concentration camps without being Dachau or Auschwitz. Concentration camps… at the most basic level… [exist] to separate one group of people from another group. Usually, because the majority group… deem the people they’re putting in to be dangerous or undesirable in some way.” In that same article, historian Andrea Pitzer, author of One Long Night: A Global History of Concentration Camps, is quoted as saying “We have what I would call a concentration camp system.” Important to remember that the Nazi regime opened the gates of their first concentration camps in 1933; they weren’t converted to extermination camps until 1941. If “Never Again” is to have any meaning, it’s imperative to make sure that we never close that gap of eight years.

Masha Gessen, exiled Russian dissident and activist against Vladimir Putin’s regime, analyzes the implications of Holocaust metaphors in her excellent essay in The New Yorker titled “The Unimaginable Reality of American Concentration Camps.” Gessen explains that the faux-outrage about Ocasio-Cortez’s tweet can be contextualized by understanding that we currently face a “choice between thinking that whatever is happening in reality is, by definition, acceptable, and thinking that some actual events in our current reality are fundamentally incompatible with our concept of ourselves – not just as Americans but as human beings – and therefore unimaginable.” Just as Douglas did not equivocate, so too the critics of this evil system at our border must not. Douglas didn’t avoid offending “moderates” or “centrists,” in the eyes of the former enslaved man the conduct of the nation is “hideous and revolting,” America is deserving of a “fiery stream of biting ridicule, blasting reproach, withering sarcasm, and stern rebuke,” a land of “great sin and shame.” Perhaps Cheney is chaffed by the truth, but Douglas would remind her that what is needed is “the storm, the whirlwind, and the earthquake. The feeling of the nation must be quickened; the conscience of the nation must be roused; the propriety of the nation must be startled… and its crimes against God and man must be proclaimed and denounced.” Analyze the rhetoric, the grammar, the syntax, the diction of Douglas’ address, and ask yourself if one iota should be changed in 2019?

A common question that teachers will ask students when they learn about slavery or the Holocaust is “What would you have done if you were alive then?” While undoubtedly must of us answered that we’d resist or help, in this summer we now have more honest answers. If you ever wondered how you’d react, if you ever wondered how others would justify such malignancy – now you know. There is a grotesque segment of people fine with the fact that infants are forced to soil themselves and children are made to sleep on cold concrete. These people deny that it’s really happening, or pretend it’s not that bad, or most heinously they simply don’t care since it’s not their children, or they even glory in such atrocity because the victims have a different skin color, or a different religion. Then there are those brave women and men of conscience, people like the human rights attorneys and doctors who are advocating to abolish this wicked system, or the workers at the Wayfair company who went on strike rather than make furniture to supply the regime. And then there are the rest of us, those of us horrified, disturbed, and sickened, but too cowardly, tired, or paralyzed to do anything other than share articles like this one.

German philosopher Hannah Arendt writes in her 1978 Life of the Mind that the “sad truth of the matter is that most evil is done by people who never made up their minds to be or do either evil or good.” If we’re cowardly, we must steel ourselves; if we’re tired, we must wake ourselves; if we’re paralyzed, we must begin to move ourselves. The good news is that it is no single person’s responsibility to bear witness; it is no solitary woman or man who will end this evil single-handedly – and there are things that you can do right now. You can take part in the July 12th “Lights for Liberty: A Vigil to End Human Detention Camps,” which is holding events at the actual sites and other locations around the country. More immediately, you can donate money, time, and resources to organizations on the ground who are working to provide legal consultation to the imprisoned and to help women and men make bail. There are several worthy organizations, but you might consider starting with the American Civil Liberties Union that has a dedicated section of their website detailing ways to help on specifically this issue, you can assist Lawyers for Good Government, or you can contribute to RAICES, a refugee aid project founded by community activists in south Texas. Most of all, you must not look away. Douglass demanded of his audience that they look, and we must do the same. Once we do, what do we see?