What was the global significane of the Civil War? What exactly is the definition of “freedom?” How are Donald Duck, Indiana Jones, and anti-modernizationists connected? The second day of the Ideologies and U.S. Foreign Policy International History Conference was highlighted by experts’ bold answers to these ambitious questions. Two separate panels of historians and political scientists shared their research on issues related to ideologies and U.S. foreign policy.

The first panel of the day discussed “concepts of the international” in U.S. foreign policy ideology and was moderated by Mark Bradley of the University of Chicago. Daniel Tichenor, from the University of Oregon, spoke about his paper, “Contentious Designs: Ideology and U.S. Immigration Policy.” In his paper, Tichenor related concepts of the international to a discussion of how immigration policy in the U.S. has been framed by four ideological cluster groups– Classic Restrictionists, Liberal Cosmopolitans, Free Market Expansionists, and Social Justice Restrictionists– which have existed since the foundation of the nation. Tichenor tied the commonalities and tensions within these clusters to an explanation of why the United States has historically had such little progress with immigration policies. For him, this stalemate has been as a direct result of the isolating practices of these clusters. When meaningful legislation has occurred, such as with the passing of the 1965 Immigration and Nationality Act and the1986 Immigration Reform and Control Act, it has always been during rare times of what he called, “strange bedfellow politics.” In most instances though, these clusters tend to operate in isolation from–or opposition to -- one another. As a result, immigration policy in the United States has been stagnated except for infrequent moments of compromise and incongruous alliance. 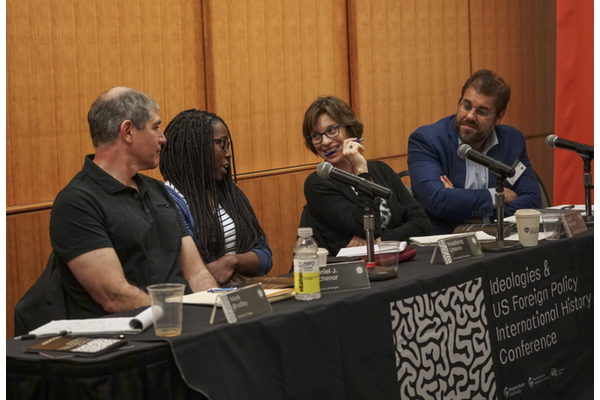 Imaobong Umoren, from the London School of Economics and Political Science, then spoke about her paper, “Eslanda Robeson, Black Internationalism and U.S. Foreign Policy,” an extension of research she had done for her previous book Race Women Internationalists Activist-Intellectuals and Global Freedom Struggles (University of California Press, 2018). In her talk, Umoren explored the concepts of the international through the life of Eslanda Robeson, an African-American activist (wife of celebrated singer, actor, and international activist Paul Robeson) who situated her activities as an extension of hope. Umoren spoke of her understanding ofhope as a way to grasp not only Robeson’s activism but also transformational black internationalism, more broadly, and as a key element of a “romanticized” vision of certain organizations, such as the newly formed United Nation, which Robeson held.

Umoren was followed by Melani McAlister fromThe George Washington University, who spoke about her paper, “‘Not Just Churches’: American Jews, Joint Church Aid, and the Nigeria-Biafra War.” McAlister focused on the international by examining the origins of humanitarian aid during the Nigeria-Biafra War, specifically aid given by American Jews. She explained that theaid from American Jews was largely shaped by larger political factors, such as the desire to reshape the public narrative and perception of Jews after the end of WWII as well as the lack of mainstream status of American Jews in the public narrative. Her analysis of American Jews represents a larger framework of how issues such as religion, money, perception, and memory have shaped humanitarian aid in situations of crisis.

The first panel concluded with Jeremi Suri from the University of Texas at Austin. In his paper,“Freedom and U.S. Foreign Policy,” he abstractly dealt with notions of the international by discussing the different ways Americans have defined the internationally ubiquitious word “freedom” throughout history. First, in early America, freedom was considered to be Freedom From, such as freedom from the British system. Policy at this time was defined by what America was not rather that what it was. The second period took place after the Civil War and was mostly about Freedom to Produce. Suri suggests that this was largely framed by Americans’ insatiable need to expand, most acutely demonstrated by William H. Seward’s acquisition of Alaska. The third period took place around the end of WWII, or perhaps from the New Deal through the end of WWII and the building up what some call the “liberal world order,” as freedom came to be redefined and redeployed as Freedom of Hegemony. In this period, according to Suri, Americans felt as though they could only be free if they dominated, which was further cemented by a push towards unipolar U.S. world hegemony. Suri concludes that freedom has rhetorically been used as a reason for action, power, dominance, and mobilization. These various uses of freedom have left its definition fluid.

Freedom of Hegemony may not accurately describe the current state, especially since, according to Suri, the failures of the Iraq war shattered that definition. As a result, Freedom is currently without definition, despite the fact that it is “perhaps the” most important word of American history. Hopefully, future historians will come to define this era. Suri encouraged the audience to consider the strengths and limits of such framing, and they seemed keen to engage and discuss the topic with him.

After the panelists spoke, Bradley opened up the room to questions and comments from the audience. A lively discussion emerged around Suri’s definition of Freedom. One audience member felt as though Freedom to Produce seemed very similar, if not identical to Freedom From. Suri acknowledged their similarities but clarified his point by saying “old waters don’t go away.” Old definitions of freedom still exist, but new definitions emerge and for Suri, the “relative weights” of the definition of freedom are what really mattered. This prompted another audience member to ask Suri if Freedom of Hegemony was really just Freedom of Economic Plunder, to which Suri chuckled and promptly agreed.

Even though the the second panel of the day grappled with “concepts of progress” in U.S. foreign relations, which was moderated by McAlister, more connections between the panels emerged such as concepts of modernization and space.

The panel began with Jay Sexton from the University of Missouri who spoke about his paper, “The Other Last Hope: Capital and Immigration in the Civil War Era.” In relating to issues of progress, space, and modernization, Sexton set out to try and answer one ambitious question: what was the global significance of the Civil War? In answering this question, Sexton examined the various stages of American economic policy as shifting from one of heavy consumption to downshifts in spending and then to the chaotic aftermath of these abrupt shifts. To illustrate this point, Sexton used the metaphor of a vacuum or Hoover. The first stage of heavy consumption in the 1840s is akin to the hoover sucking in capital and labor at a time of unprecedented growth and an expansion of “space” in the United States. The downshifts in economic spending happened in 1857 with an abrupt blowing of the hoover- the United States faced a lot of economic pull factors such as instabilities in Europe like the 1848 Irish Potato Famine. And then after a period of blowing, the hoover got turned back on, but on “turbo mode” in 1846 when the economy was unable to control its growing patterns and in the wake of African colonization (of which the United States was not a part), Americans began intensified capital and labor scrambling. Through this sucking, blowing, and sucking of the hoover, Sexton deftly explained the flows of labor and power in the United States in the Civil War era. These changes in immigration and labor flows explore how the U.S. was attempting to modernize during in these years, as well as impacts on the immigration and economy as the physical boundaries of the country are changing. 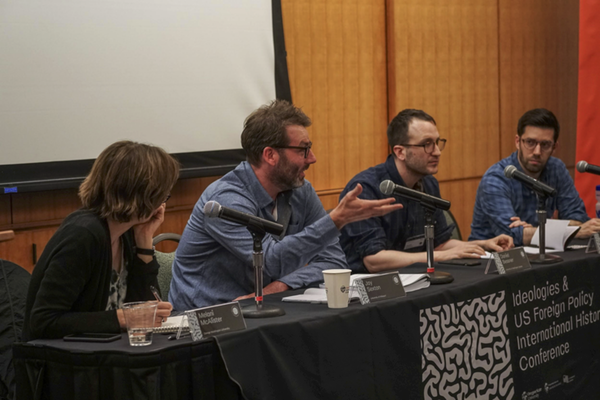 The second speaker was the University of Washington’s Daniel Bessner who talked about his paper, “RAND and the Progressive Origins of the Military-Intellectual Complex.” In his talk, Bessner argued that RAND (an influentialmilitary minded research think tank that was established in the 1940s) was the apotheosis of Air Theory (the pervading idea amongst military leaders and politicians after WWII which held that the progressive developments of plane technology would eventually lead to the end of warfare).Air theory was developed during a time of heightened notions of progress leading to the betterment of society, and his work will focus on the works of several RAND elites in the hopes to situate his work amongst the dearth of histories surrounding defense intellectuals, a topic which Bessner argues highlights a unique form of American state building.

McAlister ended the panel with questions and comments from the audience. Lots of people had questions about Donald Duck and the practice of analyzing comics and youth literature as a lens on foreign policy ideology. Several in the audience wanted to know ifthe character had been translated into different languages.I mmerwahr reported Donald Duck became even more ingrained in some translated countries’ cultures than in the United States.

An interesting set of questions and discussions also emerged about the notion of “Farbackistan,” an imagined place that Donald Duck went to on one of his journeys. In Barks’ world, Farbackistan was always portrayed as empty and with no modern amenities. Bradley keenly commented that perhaps Farbackistan, while a fictional place in the world of Donald Duck, was actually a vision of place that the people of RAND and the Civil War era policy makers were also going. During the time when RAND was really in full swing, Americans went to Vietnam, a pseudo-Farbackistan that was often depicted in American media as remote and without modern comforts. During the Civil War,  one of the two most important policies that defined the global significance of America after the Civil War, according to Sexton, was the Homestead Act, which envisioned the American West as an empty expanse of nothingness, a kind of Farbackistan, that needed to be filled with people. Other questions of the panelists seemed to focus on the emerging similarities of the three scholars’ work despite the disparate themes. From these questions it seemed that the commonality of the three talks was hinged upon notions of place and stories of progress and modernization. 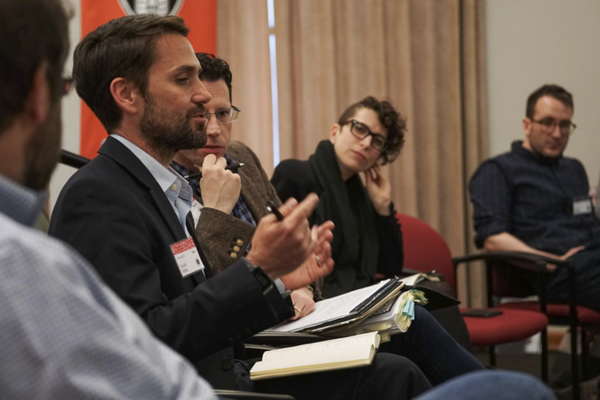 The conference concluded with an intimate circle, where scholars and community members came together to reflect on the conference and the issues at large. Attendees agreed that the presentations and papers amount to a major intervention in the field and the group talked about key takeaways, new developments in the field, and how best to shape the essays into the best possible resulting book. Throughout the discussion and reflection, it became clear over the two days that ideologies are not static, as was once suggested in part by Michael Hunt, though there was some useful discussion and debate about tracing long arcs and consistencies in thought, action, and policy versus looking more for moments of rupture. Most agreed that the presentations clinched just how much ideas and ideologies matter for understanding the history of U.S. foreign relations and the “U.S. in the world,” and, perhaps most importantly, that there is virtue in the idiosyncratic.