by Miriam Lipton and Marcelo Carocci

Marcelo Carocci is a PhD student in the History of Science program. Marcelo completed his undergraduate studies in Cultural Anthropology and his Master of Arts degrees in Applied Anthropology at Oregon State. 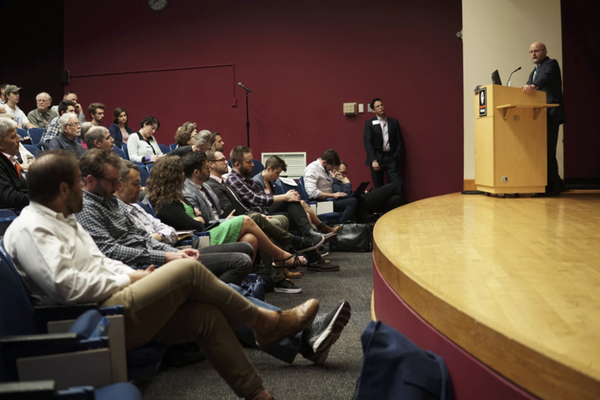 In July 2017, then Secretary of State Rex Tillerson and then Secretary of Defense James Mattis invited President Trump to a meeting at the Pentagon in the famously hyper-secure room known as “the tank.”  Tillerson and Mattis were concerned that Trump did not understand global politics and wanted to give him a crash course on U.S. world leadership. However, the lesson did not have the results that Tillerson and Mattis expected. Trump reportedly commented that the world order and American role described by his advisors  was “exactly what I don’t want.” Famously, Tillerson called Trump a “moron” after the meeting.

The Tom McCall Memorial Lecture was established to foster intellectual exchange. Previously, politicians, journalists, and other esteemed members of the publichave delivered the address. Lindsay’s experiences uniquely suited him to give this year’s talk. A political scientist by trade, Lindsay has served as the director for global issues and multilateral affairs on the staff of the National Security Counciland was a consultant to the United States Commission on National Security. Currently Lindsay is the Senior Vice President, Director of Studies, and Maurice R. Greenberg Chair at the Council of Foreign Relations. In addition, Lindsay has written several books and articles. He also hosts several podcasts and writes a weekly blog, The Water’s Edge, which focuses on the politics of U.S. foreign relations and the domestic policies that underpin them.

The lesson that Tillerson and Mattis attempted to teach Trump is grounded in American history and political thought.  The world created by the U.S. after World War Two, the so-called “rules based order” (RBO) or “liberal world order” (LBO), institutionalized American leadership through its role in international organizations and alliances. Those alliances were necessary, according to Lindsay, in order to create a world more conducive to U.S. interests and values such as open markets, democracy, human rights, and the rule of law.  While this was a radical approach to world leadership and a new step for the nation, it was based in the belief that this system woud help other countries flourish and in doing so, protect American propserity. Mattis and Tillerson recognized that this was not a perfect world order but it brought about an unprecedented period of peace and security and overall served America’s interests.

In contrast, Lindsay argued that Trump tends to consider American allies as adversaries or at least as potential competitors or freeloaders.  In Trump’s worldview, American allies use the U.S. for protection while trading on terms disadvantegous to the U.S., causing job losses and worsening the American economy.  To Trump, the global system is less a network based on interdependence and cooperation and more of a zero-sum hierarchy. Trump’s ideological framework is that international politics are always conditional and transactional, similar to Trump’s area of expertise: real estate. Interestingly, this is not exactly a position of isolationism, according to Lindsay, but one of transaction and reciprocity, where, for example, Trump wants allies to spend more, give more, provide more, etc.  In short, it is a worldview premised on a belief that if the U.S. demands more (especially from its allies), it will get it. 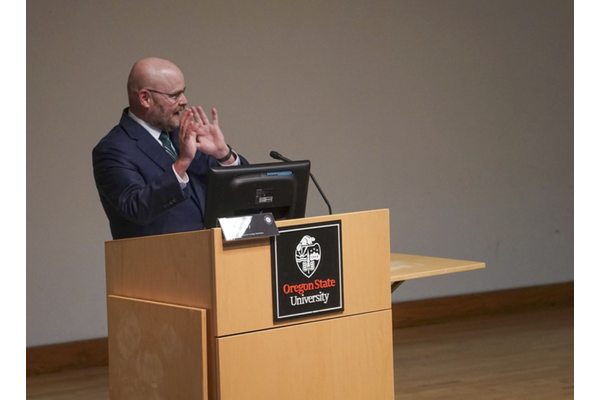 Lindsay challenged the ideas the president uses to support his criticism of  American allies.  For instance, Trump often threatens to bring home U.S. troops if allies do not increase their NATO military spending.  However, if the U.S. withdrew from places like Germany, Japan, and South Korea, it would actually cost U.S. taxpayers more money because the host countries pay up to 50% of the costs tostation those troops.  In trade, Lindsay pointed out that the U.S. remains the world’s largest and most vibrant economy. He argued  that bilateral trade deficits are not the consequence of bad trade deals but rather  simply reflects the fact that the U.S. spends far more than it saves, that it has bad tax policies, and lacks certain technology.

Since taking office, Trump has certainly acted in accordance with his worldview. He has demanded NATO allies pay more, raised tariffs on American allies, began a trade war with China, withdrew from the Iranian nuclear deal and the Paris Climate Agreement (among others), and dismissed human rights abuses.  Trump offered wins, but in truth, those never came.  He claimed to have defeated ISIS, but still has no clear strategy on how to fight terrorism.  Negotiations with North Korea have not produced the results he promised.  The trade deficit is up by 15% and the re-negotiation of some trade agreements by Trump’s administration ended up benefiting other countries, such as the European Union, and hurt U.S. agriculture.

So why, Lindsey asked, is Trump not “winning” as he promised?  Lindsey aruges this is in part because Trump lacks strategy, acts and speaks impulsively, considers unpredictability to be a virtue, and often disagrees with his national security team. But the biggest reason, Lindsey believes, is that Trump fundamentally misperceives the world: the application of raw power has not worked as he expected.  Enemies, by and large, have not buckled to threats and bluster.  The unexpected consequence of the application of raw power, according to Lindsay, was miscalculating not how much pain the U.S. can inflict, but how much pain the U.S. enemies were able to take. Allies may have given a bit more in the face of Trump’s unilateralist demands, but at the same time many allies now seem to see concessions as temporary, with new demands imminent or even treaties or agreements torn up on a whim.

Lindsey worries that the largest impact of Trump’s presidency is that American allies increasingly believe they can work without the U.S. Lindsay fears the future without American leadership will be less secure, leading to another global battle for hegemony. During the first years of his presidency, Trump has managed to show the world what is like to not have American leadership as he pulled out of the Paris Accords, the Trans-Pacific Partnership, and the Iran Nuclear Deal. Trump renegotiated NAFTA, cheered for Brexit, maligned NATO, and more. The world does not like that, Lindsay argued powerfully. Some global leaders have come to the White House to seek increased American leadership, only to be told by the White House that their help is not needed.  The bottom line:  American first, America alone.

After Lindsay’s talk, public questions and comments were encouraged. The questions touched on nearly all aspects of Lindsay’s talk, and really demonstrated an engaged and interested public. Despite the fact that some questions were hard hitting, and some were more lighthearted, in general, the audience seemed most keen to have Lindsay’s opinion on the future state of the United States in a post-Trump world. While Lindsay seemed initially reluctant to make conjecture about the future, even quoting Yogi Berra with, “predictions are hard to make, especially ones about the future” he eventually commented that, on balance, he believes that Trump’s legacy will most likely be like that of any president, an ever fluctuating series of ebbs and flows. 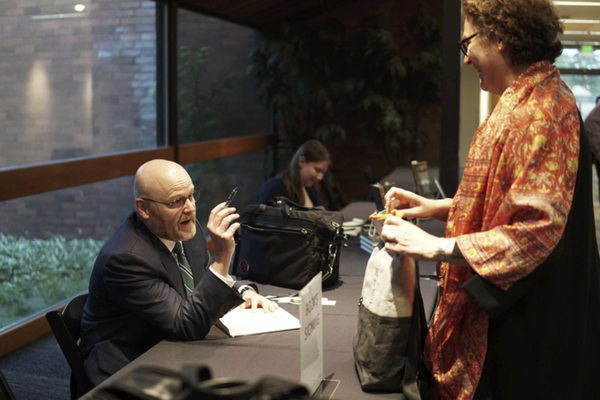