Where Did the Indigenous Community Mothers Go?

Candace Wellman is the author of two recent books published by Washington State University:  Peace Weavers, Uniting the Salish Coast through Cross-cultural Marriages (2017) and Interwoven Lives, Indigenous Mothers of Salish Coast Communities (March, 2019). Their eight biographies are the product of 21 years of research and writing. She is also a public speaker and consultant on the subject. She lives in Bellingham, Washington. 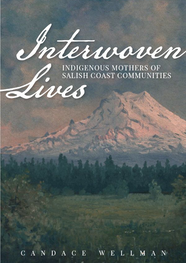 I have spent the past two decades researching and writing biographies of nineteenth century indigenous women who married and lived in a cluster of cross-cultural couples in northwest Washington State. Their husbands were county officials while others were military officers and agrarians. These women and their husbands composed 80 to 90 percent of Whatcom County’s married couples during its first twenty years of legal existence. And yet, when local historians wrote their county and city histories in the 20th century, they ignored these indigenous community mothers. The contributions and legacies of these wives and mothers were never explored. The same pattern exists in other places, leaving a conspicuous hole in Western history.

This should not be surprising, given the iconic heroines mythologized by families and fans of the American westward movement: a courageous sad-eyed wife who left her home forever to trek the Oregon Trail across the continent and help her husband tame a wilderness. Or, the mail-order bride who braved the ocean’s dangers to marry a virtual stranger and help him build a community. Or, a spinster schoolmarm who brought literacy to pioneer children in a dusty town.  Or, the saloon girl with a heart of gold whose for-sale femininity kept a settlement from exploding in violence until real ladies arrived. Annie Oakley and Calamity Jane provided fierce examples of women equal to men in the face of the West’s challenges. Sacagawea remains the only native wife of a non-native man in the West that most Americans have ever heard about.

These archetypes appear again and again in national, regional, and local histories, as well as over two centuries of fictionalized versions of westward expansion. Until Elizabeth Jameson, Susan Armitage, and other women historians established the critical need to examine women’s contributions, most nineteenth century western women made appearances as accessories to male accomplishments or tragic sacrifices to Manifest Destiny.

Almost never memorialized, even briefly, were the young indigenous women who lived near forts and in new settlements that displaced native communities, and whose husbands were army officers, Indian agents, merchants, local officials, and legislators. Historians did not consider that elite Native women’s families might have had their own agenda when they married their daughters to men they considered to be of equal status. Indigenous community mothers seem to have been an uncomfortable truth for historians and other writers that did not fit with the Euro-American mythology they sought to build around “the first white woman” in town. The result was their now-conspicuous absence.

Husbands in histories and literature have generally been portrayed as men on the fringe of development who contributed little or nothing to their town’s development. Historical accounts only reference wives briefly: “He married an Indian.” The husband often has been said to have “bought” his bride, revealing the writer’s ignorance of her family’s status or local wedding customs of Native Americans. For example, the Coast Salish people of western Washington State saw marriage as a family decision: the family considered how the groom would fit in and contribute to their extended family economy. Families chaperoned young elite women until marriage. His wedding gifts recognized her loss to her family, and a year or more of obligations from both sides were part of the arrangements. Whether or not the husband saw his tribal custom marriage as legitimate, the bride’s family did. These marriages took on the pattern of all marriages: long or short, happy or unhappy.

This is not to imply that all young wives were from elite Native families. Some were not, and sometimes a slave was offered to a man seeking only a housekeeper and sexual partner, and was likely oblivious to class distinctions among native people.

While trying to ignore the presence of native wives of “pioneer town fathers,” generations of historians showed no respect for the women’s contributions to their community’s development. A contribution was not always a man establishing a mill, a mine, or a business as current historians of western women have shown. At Bellingham Bay, four waves of bachelors poured into the settlement in the 1850s and those who stayed married the neighborhood women in the absence of eligible ones from their own society. These young indigenous wives taught the half-dozen white women how to make use of unfamiliar food sources, and cared for their children. Wives used their healing knowledge and delivered babies for isolated women. They took bachelors into their homes as boarders, providing meals, laundry, and a family atmosphere. They learned to bake bread and apple pies that their husbands and boarders missed.

Children of cross-cultural marriages in the large cluster from which my eight biographies were written found success or failure in whichever identity they chose, whether they lived in the white-dominant society or joined relatives on a reservation. Writers continue to portray them as misfits who found no place in either society, but this stereotype is false. Legacies to their new communities and even wider society are found in the children and generations that were to come.

One example is the legacy left by the young Alaskan Haida wife of Captain [and soon-to-be Confederate general] George E. Pickett, commander of Fort Bellingham. Her personal name remains unknown, but soldiers and locals addressed her respectfully as “Mrs. Pickett.” She lived with him in the fort commander’s in-town home where they often hosted visiting territorial officials and army “brass.” She died in the months after their son was born. Her son, James Tilton Pickett, became a much-lauded marine and landscape artist whose works reside in museums. He was the first Washingtonian to attend a professional art school, and one of the founders of Portland, Oregon’s fine arts community.

Jenny Wynn, an elite young Lummi woman, wed a Philadelphia Quaker blacksmith who arrived at the bay to work at the mill and new coal mine. After moving to a farm, her skill smoking superior hams turned into a profitable business. She and her husband’s support of education for rural children resulted in at least four generations of teachers in their family, educators who see that as the family identity.

Historians across the nation might enhance the view of early western communities, as well as many cities in the Old Northwest and along the Mississippi River, by looking beyond the culturally biased accounts to include this long- overlooked group of founding mothers.