When War Was a Family Affair

Walter R. Borneman’s most recent book is Brothers Down: Pearl Harbor and the Fate of the Many Brothers Aboard the USS Arizona. 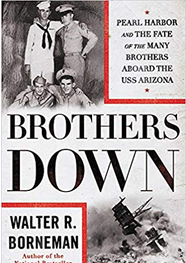 There was a time before World War II when family members serving together aboard warships was judged a good thing. An older brother in uniform was a persuasive recruiting poster for his younger siblings, especially when the uniform came with a steady paycheck. During the gloom of the Great Depression, many a young man joined the United States Navy not out of patriotic pride or a desire to see the world, but to put food on his family’s table. One less mouth to feed and five or ten dollars sent home from a monthly pay of thirty-some dollars made a big difference.

Harvey Becker left the family farm in Kansas in 1938 when he was almost twenty-two. Younger brother Marvin enlisted a year later, and nineteen-year-old Wesley followed suit a year after that. Wesley dreamed of becoming an artist and had hoped his path would lead to Kansas State, but money was tight. All three Becker brothers requested service together aboard the battleship Arizona and became gunner’s mates assigned to Turret No. 2.

Brothers Gordon and Malcolm Shive shared a childhood playing in the sands of Laguna Beach, California, but times turned tough after their father’s early death and the arrival of a cantankerous stepfather. Gordon left home first and joined the Marines. He qualified for a slot in the prestigious Marine Detachment aboard the Arizona and rowed on its competitive whaleboat team. Younger brother Malcolm had a special interest in radios and took that talent into the Navy. By December 7, 1941, Malcolm was a radioman serving on the Arizona with his big brother.

The Free family connection aboard the battleship was a father-son affair. Thomas Augusta Free, known throughout his Navy career as “Gussie,” came to the Arizona looking for one last good ship to round out his twenty-year career as a machinist’s mate. It was icing on the cake that his eighteen-year-old son, William, was aboard as a new seaman. Gussie had been absent at sea for much of William’s childhood growing up in Texas and they both relished their time together.

Wesley Heidt was the younger brother of Edward “Bud” Heidt. Wesley had just been promoted ahead of his older sibling and shipmate but Bud didn’t care. He was focused on his girlfriend, Donna. There was nothing official, but her mother surmised there might be an engagement ring coming Donna’s way for Christmas. Bud and Wesley’s own mother had been urging Wesley to write more often. “Don’t worry,” Wesley assured her when he did, “I am safer on this battleboat than I would be driving back and forth to work if I was home.”

Of course, he wasn’t. On the morning of December 7, 1941, there were thirty-eight sets of brothers, including the three Becker lads, serving on the Arizona. Harvey Becker and a few other married men had liberty ashore with their wives. They were the lucky ones. When bombs began to fall a few minutes before 8:00 am, the destruction was horrific and almost instantaneous. Turret No. 2 was at the center of the destruction. Out of seventy-eight brothers, only fifteen survived the attack. Among the dead were Marvin and Wesley Becker and Gordon and Malcolm Shive and Bud Heidt. Gussie Free and his son also perished.

Masten Ball of Iowa was one of those who survived. He was blown off the Arizona’s deck but somehow escaped the fiery waters largely unscathed. His younger brother, Bill, a promising baseball prospect, was never seen again. Back home in Iowa, the five Sullivan brothers, who were family friends, promptly enlisted to avenge Bill’s death. The Sullivans wanted to serve together and died board the cruiser Juneau when it sank off Guadalcanal with only a handful of survivors. The Shives’ younger brother Robert, not yet twelve, took it very personally and tried to enlist. His grieving mother didn’t try to stop him, knowing that kind but firm recruiters would.

After these tragedies, the US Navy never absolutely forbade such family service despite a perception among the general public to the contrary. There was no “Sullivan Law” and commanding officers did not separate brothers already serving together. Later in World War II, the Navy, Marine Corps, and Coast Guard permitted the transfer of “sons of war-depleted families” out of combat zones—essentially a sole survivor policy—unless they were engaged in nonhazardous duties. Transfers were not automatic, however, and applications had to be filed by the serviceman or his immediate family. Out of a sense of service, many never took advantage of these provisions.

None of this brought solace to those who had made the Navy a family affair and lost brothers on the same ship. For the Beckers, Shives, and so many others, service at sea during World War II really was a family affair.

To read more about these families, check out Brothers Down here or here.