How Chinese History Restarted 100 Years Ago

Peter Zarrow is a Professor of History at the University of Connecticut. 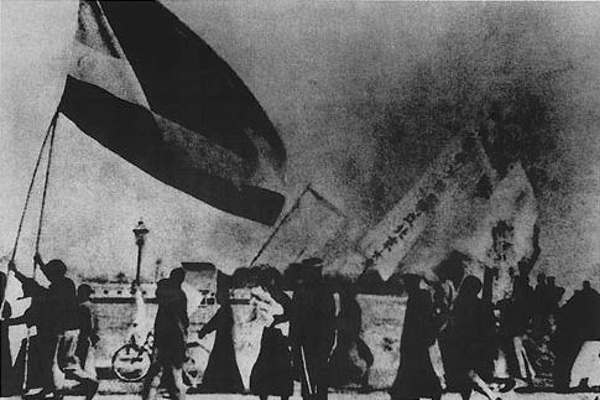 On Sunday, May 4, 1919, some 3,000 students assembled at Tiananmen Square in Beijing to protest the Versailles Treaty that ended World War I.  Most were from China’s premier institution of higher education, Peking University, but some 13 colleges were represented in all.  It was a sunny spring day, and students chanted slogans, held up banners written in English, French and Chinese (some were written in the students’ blood) and handed out fliers.  They marched to the legation quarters of the foreign ambassadors, where they were allowed to leave letters but not enter the district. A group of especially radial studentsmarched on to the house of the “traitor,” cabinet minister Cao Rulin, and burned it down.  (Cao escaped, but the Beijing regime’s ambassador to Japan was severely beaten.)

The students were angry that the victorious Allies would return territory first taken by Germany to Japan instead of China.  When China declared war on Germany in 1917, it sent 140,000 workers to Britain and France to keep the Allies’ factories open and supplies moving. Japan had declared war on Germany in 1914 and occupied the German concessions in Shandong. Cao Rulin was a logical target of the students’ ire, well known for his pro-Japanese activities.  The protestors of May 4 condemned their own government, which they learned had made secret agreements with the Japanese, and pleaded for sympathy from the international community.  Above all, they claimed to represent “educational circles” that would arouse China’s “industrial and commercial sectors” to take political action.

Though initially tolerant, the police ended the day by arresting dozens of students.  The arrests naturally provoked further demonstrations, and street demonstrations and class boycotts—already called the “May Fourth movement”—spread across China.  The whole summer was marked by furious student meetings, petition drives, and even boycotts of foreign goods.  By this time the students had won considerable support from professional associations, business groups, and workers.  Many merchants enthusiastically supported the anti-Japanese boycott; others were pressured to join.  Shanghai was virtually shut down in early June when 60,000 workers went on strike. The movement inspired the patriotism of Chinese communities abroad as well.

China’s weak government, led by military men, had little legitimacy, and it sought to appease the students by firing the “three traitorous officials” whom the students had first targeted. In the end, China’s legation to Paris refused to sign the Versailles Treaty. The Allies, however, never seriously considered returning Shandong to China.  For them, the issue was a minor blip on the way to settling the Balkans, punishing Germany, establishing the League of Nations—and using Germany’s old territories across the Pacific to buy off the Japanese, whose request for a statement acknowledging the principle of racial equality they firmly refused.

In what sense did “May Fourth” restart Chinese history?  After all, the ideals that the students were preaching were hardly new.  Belief in democracy and science, hopes for human rights and national self-determination, and criticisms of the traditions of autocracy, patriarchy, and Confucianism had stirred educated youth (and some not so youthful) for a generation or more. Nor were street actions and boycotts new—American goods were the target of a boycott campaign in 1905 that was provoked by the anti-Chinese immigration laws and policies of the US.

Nonetheless, it was the May Fourth movement that revived Chinese politics, which had been left moribund in the wake of the 1911 Revolution.  “Politics” in this sense refers to a public realm of discourse and action created by people coming together—this was precisely how the May Fourth students pictured themselves as opposed to the closed and stagnant world of China’s military-backed bureaucrats and assemblymen.  The May Fourth movement inspired political action and made it possible.  While the vast majority of the population in rural China barelyaffected, at least immediately, China’s rapidly growing cities buzzed with new associations, journals, and social experiments such as communal living and work-study programs.  A new sense of dedication and even self-sacrifice was palpable.  Out of this ferment grew the two great disciplined, militarized, and revolutionary political parties of the twentieth century: the Nationalist Party (Guomindang) and the Chinese Communist Party (CCP).

1919 marked a paradoxical moment, combining great hopes with enormous disillusion.  The first disillusion was the fact of the Great War itself.  Up until this point, several generations of Chinese had looked to the West as a model for China’s own reforms.  They combined a hatred of the foreign incursions against China since the Opium Wars of the 1840s with growing admiration of Western civilization. By the early years of the twentieth century, thousands of Chinese had studied in and traveled through America and Europe, as well as Japan, which seemed to offer a model of Western-style modernization close at hand.  But the “Europe War” that broke out in 1914 dragged on and on.  Chinese readers kept up with the latest developments in weaponry: machine guns, airplanes, submarines, and poison gas.  All this suggested that Western civilization was morally bankrupt.  Few politically aware Chinese at this point thought that China should support either side in a contest between nations that had forced the “unequal treaties” on China.

At the same time, China was descending into a downward spiral of political breakdown and violence.  In 1915 Japan issued its “Twenty-one Demands,” insisting on greater privileges just as the European powers were unable to counter it.  President Yuan Shikai tried to make himself emperor, at which point many of his military supporters slunk away.  Yuan died in the midst of the bruhaha that he had created, and regional military commanders disowned any fealty to Beijing.  There still remained a kind of rump central government, and the economy continued to function, a working class emerged, new schools proliferated, universities grew, and at least in the foreign concessions order was maintained.  But rural banditry flourished and the “warlord era” with its endlessly indefinite battles had dawned.

No wonder Chinese considered that the 1911 Revolution had failed.  Some said that the political failure stemmed from a deeper cultural backwardness: people debated if the Chinese people needed a long period of education and how much of the past should be discarded. Meanwhile, “politics” had come to refer to the machinations of small groups of officials and military men. Into this malaise came the stirring promises of Woodrow Wilson.

For Chinese, the ideal of “democracy” was at least as important as Wilson’s talk of “national self-determination.”  To join the war against Germany became a righteous cause. And Chinese greeted the Allied victory of 1918 joyously.  They saw a victory of light over dark, of civilization over militarism, of cosmopolitanism and open-mindedness over nationalism and racism.  Some thought that the Bolshevik revolution in Russia and a coming Communist Revolution in Germany represented the logical culmination of popular democracy.  Such language was not propaganda but reflected a genuine sense that history had shifted.  Even more sober observers thought that the defeat of Germany at least represented a triumph of international law and a shot across the bow of imperialism.

Such hopes were not limited to China, and reflected a utopian moment partly rooted in the ever-wilder promises of President Wilson, and partly rooted in local conditions.  In China’s case, the old ways had been under challenge for a generation or more.  By 1919 the cosmology of Heaven and cosmic forces explicated in Confucian texts had clearly collapsed; the foundations of the emperorship had crumbled beyond repair; and many young people had concluded that their fathers’ power over their fates was intolerable.  Culture, society, and the political realm were all in enormous flux; morality had to be rethought.  This opened the way for the May Fourth generation to turn to ideals of intellectual freedom and individualism, a national vernacular and new literature, and democratic institutions to strengthen and unify the country.

The impact of the racism and colonialism enshrined in the Versailles Treaty can thus be imagined.  The “West” could no longer serve as a model for China’s future development.  True, a few intellectuals kept their faith in moderate reform, but more turned in other directions.  The revival of Confucianism had appeal, but most of the younger generation turned toward more radical routes.  Looking at the student demonstrators of 1919, we can see a combination of heightened anti-imperialism and genuine cosmopolitanism.  From the vantage points of Beijing and Shanghai in particular, the world now offered new revolutionary hopes.  Politics had returned: an open, tumultuous politics of studies and the streets.  Students positioned themselves as devoted patriots, not seeking advantages for themselves but to simply strengthen China and awaken its mass of citizens.  At the same time, they were citizens of the world familiar with Dickens, Gogol, Rousseau, John Stuart Mill, Rabinadrath Tagore, and John Dewey, not to mention Arthur Conan Doyle and Alexandre Dumas. They believed in universal values—freedom, equality, justice, and socialism.  The meaning of the war, then, lay not in a vacuous Wilsonianism or the effect of the Versailles Treaty, but in the German and Russian Revolutions. With the Bolsheviks’ victory in Russia, Leninism offered an anti-colonial revolutionary alternative to Wilson’s empty promises.  The new Soviet Union offered to abandon the old Czarist claims on Chinese territory, and the re-formed Communist International prepared to send its missionaries and organizers to China.

With allowances for Communist jargon, Mao Zedong was right when, in 1939 on May Fourth’s twentieth anniversary and in the midst of Japan’s invasion of China, he looked back from his isolated, precarious perch far to the northwest, to call the May Fourth movement “a new stage in China’s bourgeois-democratic revolution against imperialism and feudalism.”  Mao’s formula long shaped Chinese understandings of the origins of Chinese modernity.  Historians today do not accept Mao’s tendentious equation of May Fourth with Communism, but few historians would deny that May Fourth marked a new stage of some kind.  It did not end warlordism, nor did it provide new standards to judge legitimacy—democratic norms had been developing from turn of 2oth century.  Nor was May Fourth a watershed in Chinese history, if only because we can now see how it was embedded in a longer set of revolutions across the twentieth century.  But it was much more than a simple reaction against the racist imperialism embodied in the Versailles Treaty.  It was a culmination of intellectual, social, and institutional changes developing in China since the 1890s, and it led to a new politics.  If it did not magically create the CCP, it did reflect the new muscle of the working class as well as student power.  And it did define the new political norms that allowed China’s first Communists to find a foothold amid the flourishing utopianisms of the day.

The present leader of China, Xi Jinping, described “May Fourth” as a student movement based on patriotism and revolutionary fervor in his celebratory speech on April 30.  He was not wrong, but he neglected the key slogan that became associated with May Fourth: “science and democracy.”  This meant a commitment to rational, secular thinking combined with a commitment to popular sovereignty and an open society.  To this ideal, the May Fourth movement added the energies of an aroused and angry nationalism—a nationalism that for some justified violence as it remained open to progressive currents from around the world and opposed to oppression in all its forms.  Much of “May Fourth spirit,” then, is seen by China’s current leaders as a threat to their authority.  This year, as China also marks the seventieth anniversary of the founding of the People’s Republic, some Chinese will also mark the thirtieth anniversary of the Tiananmen Square democracy movement.  The political restart of May Fourth in 1919 is a direct ancestor to both these later events, and even today May Fourth still stands as a model of youth-led social movements.