The Template for the Holocaust- Germany's African Genocide

David Carlin writes about American and European History. He is working on a series on the July Crisis and the outbreak of WWI. He graduated phi beta kappa from Williams College where he majored in History. He can be reached at dcarlin7@gmail.com. 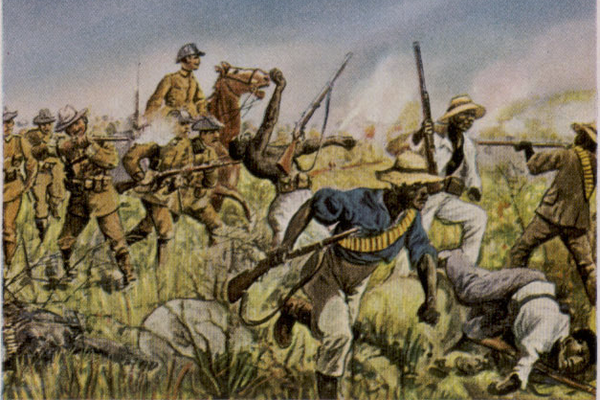 German Schutztruppe in combat with the Herero in a painting by Richard Knötel.

Hundreds of emaciated prisoners look out helplessly. Many have died of disease or malnourishment, but their German masters drive them on each day to hard forced labor. As soon as they cannot work anymore, they are shot. Women and children are not exempt from this brutal system. A mother with a young baby falls in the stifling heat and both are beaten mercilessly by a guard. The baby cries, but the mother knows to stay silent.

In this camp, fewer than half the prisoners will survive. Even the commandant considers the rations “in no sense adequate.” With only a handful of uncooked rice to sustain them, these starving people fight for any scrap of food they can find.

This scene comes not from 1940s Eastern Europe but South West Africa some thirty-five years earlier. The treatment of the Herero and Nama grimly foreshadows the treatment of the Jews of Europe. In the 20th Century’s first genocide, Imperial Germany’s campaign of annihilation provided precedents for the racial ideologies and exterminatory tactics of the Holocaust.

Germany, which had only unified in 1870, was a latecomer to the colonial game. Otto von Bismarck, Chancellor of the German Empire,had little interest in costly colonial adventures, once declaring “my map of Africa lies in Europe.” Yet, with the rise of Kaiser Wilhelm II, Bismarck’s sober “Realpolitik” was replaced with the expansionist “Weltpolitik” (world politics),expressing Germany’s desire to become a global power. In 1897, Foreign Minister (and later Chancellor) Bernhard von Bulow eloquently captured the essence of “Weltpolitik” by demanding Germany’s “place in the sun.” To secure that place, Germany needed a colonial empire.

To Germany’s chagrin, the other European powers (especially Britain) already occupied the most valuable territories. To “catch-up,” Germany sought to rapidly develop the few colonies she possessed. In South West Africa (modern Namibia), the Reich promoted “Germanization” through the arrival of settlers, the conscription of native people, and the construction of railroads. Germany’s imperialist aspirations posed a mortal danger to South West Africa’s original inhabitants, who were systematically deprived of their possessions, their lands, and their civil rights. Relentless German encroachment led to growing tensions, which burst into open rebellion in 1904.

Trotha had no intention of making peace with the Herero or Nama, as he explained, “my intimate knowledge of many central African nations has everywhere convinced me…that the Negro does not respect treaties but only brute force.” For Trotha, the aim was not pacification, not subjugation, but annihilation. Troth would advocate “unmitigated terrorism” and pledge to “destroy the rebellious tribes by shedding rivers of blood and money.” On the eve of WWII, Hitler would issue a similar pronouncement to the Wehrmacht: “Close your hearts to pity. Act brutally.”

On August 11th, Trotha’s troops met a large Herero force commanded by Samuel Maherero at Waterberg plateau. While the Herero outnumbered the Germans, the Germans broke the Herero lines with heavy artillery and superior firepower. Then, the Germans drove their defeated adversaries into the Omaheke Desert along with their women and children. German pursuit turned into outright slaughter. A witness wrote “the Germans took no prisoners,” not even sparing “mothers holding babies at their breasts.” The soldiers murdered indiscriminately, killing the wounded, the unarmed, and the infirm.

Many of the initial survivors of the massacre would die of starvation and dehydration in the coming weeks. Trotha commanded his troops to patrol all the watering holes and shoot any Herero trying to escape the desert. The Germans may have also poisoned local wells. In October 1904, Trotha issued his infamous “extermination order,” decreeing that “within the German borders every Herero, with or without a gun, with or without cattle, will be shot.” No exception would be made for women and children.

Trotha’s barbarism requires an understanding of Social Darwinism and the scientific racism that had gained currency in this period. Trotha and other nationalists considered the conflict a “racial war.” It was only natural for the superior German race to destroy their inferior foes. Trotha claimed that Germany could not prosecute a war “against non-humans” humanely. Considering the Herero a pestilence, he wrote: “I think it is better that the Herero nation perish rather than infect our troops.” The Herero were a threat not only to German settlers but to German blood.

Trotha’s pursuit of racial purity and “living space” for the Teutonic race were well understood by German nationalists. Germany had banned mixed-race marriages in South West Africa, considering them a form of “Rassenschande” or “racial defilement.” The legal disenfranchisement of non-Germans and the fixation on blood would find a chilling echo in the 1935 Nuremburg Laws.

These racial laws were supported through the disreputable pseudoscience of Eugenics. Disturbingly, many German academics collaborated in developing the dangerous mythology of racial exceptionalism. Not only would scientific racism be used to justify Germany’s exterminatory policies, but, as will be seen, it would play ghoulish role in the genocide itself.

After breaking the resistance, the Germans rounded up the surviving Herero and Nama into concentration camps. The prisoners were then used as slave labor to build railroads and dig mines. At the notorious Shark Island camp, inmates who had been worked to death were discarded into the shark-infested waters. Shark Island also housed a gruesome medical complex, where German doctors tortured prisoners by injecting them with dangerous chemicals and diseases. These doctors also performed lethal experimental operations without anesthetic. Conditions were so horrific that numerous inmates committed suicide.

At Swakopmund, women were forced to boil heads of the deceased and strip the flesh so that the skulls could be sent to Germany for research. German universities received hundreds of skulls and other remainsfrom the victims of the genocide. These grisly artifacts were then used to demonstrate the allegedly subhuman characteristics of the Africans.

Despite international condemnation, the genocide continued until 1908. By then, the nearly 85,000 Herero had been reduced to 15,000 “starving refugees.” Almost half the 20,000 Nama had been killed. The Witbooi sub-tribe was reduced from 1600 in 1905 to just 38 in 1912. The survivors had lost everything, and many would suffer in destitution for years.

Over one-hundred years later, the genocide has been largely forgotten in the Western consciousness. Shamefully, the race of the victims plays a role in our collective ignorance. Moral outrage can be selective, conditional, and racial. Contrast the international reaction to the events in South West Africa to the reaction to German atrocities in Belgium in 1914. Ironically, in the case of the Herero and Nama genocide, racism belittles the memory of its victims.

However, justice has proved elusive. Victim remains are still in museums around the world, including at the Museum of Natural History in New York. While the German government has apologized, it has ruled out the type of reparations for victim’s families that were provided to Holocaust victims. As small minorities within Namibia, the Herero and Nama are still grappling with the economic effects of the genocide. Their reduced numbers limit their political power, and without their lands, many struggle with cyclical poverty. In 2017, some Herero and Nama sued Germany, demanding financial restitution. Those lawsuits remain pending.

In the long history of racial violence, the Herero and Nama genocide represented a unique horror. For the first time in history, a modern, industrial nation sought the complete destruction of another people. Germany was guided by a vision of racial superiority, bolstered by pseudoscience and jingoism. Those same forces would form the bedrock of the brutal Nazi regime.