Gregory D. Foster is a professor at the National Defense University’s Eisenhower School (historically known as the Industrial College of the Armed Forces), a West Point graduate, and a decorated veteran of the Vietnam War. The views expressed here are his own. 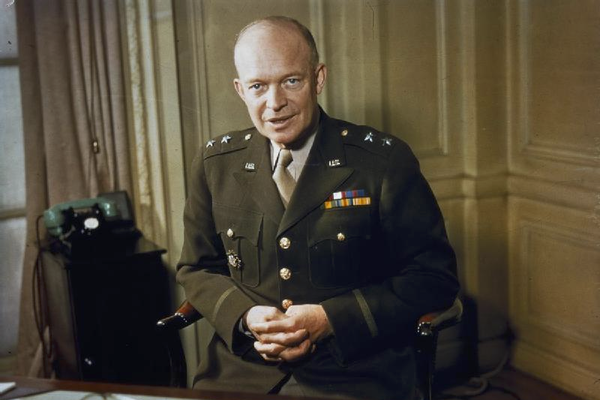 never learned anything from history, or acted on principles deduced from it.”

The military-industrial complex, a term brought to life by President Dwight D. Eisenhower in his 1961 farewell address to the nation, is widely acknowledged, quoted, and even embraced today.Yet, ironically, the ubiquity of this embrace hasn’t actually affected the outsized influence of that complex.

“In the councils of government,” Eisenhower warned, “we must guard against the acquisition of unwarranted influence, whether sought or unsought, by the military-industrial complex [‘military-industrial-congressional complex’ in the original text]. The potential for the disastrous rise of misplaced power exists and will persist.”

He had prefaced these words in the same address by observing: “The total influence [of the then-new conjunction of an immense military establishment and a large arms industry] – economic, political, even spiritual – is felt in every city, every Statehouse, every office of the Federal government. We recognize the imperative need for this development. Yet, we must not fail to comprehend its grave implications.”

If we were blessed with an ideal state of civil-military relations in this country, its distinguishing characteristics would include – in addition to a strategically effective military and strategically competent civilian overseers – what we might call a properly subordinated military-industrial complex. This complex would, accordingly, be subordinated to and supportive of national interests, aims, and responses. Quite the opposite has been the case, though, throughout the almost six decades since Eisenhower alerted the American people the centrality of military industries to civilian life. Today, it is a mammoth, strategically distorting, even strategically dysfunctional confluence of political, ideological and, yes, economic interests that warrants renewed attention, if not alarm. This is especially important as the military-industrial complex has been given new, unfettered life and license by the 2018 National Defense Strategy document, now in place, that has assumed the de facto position of representing America’s current strategic posture.

Roughly 13% of the U.S. federal budget now goes to private-sector contractors, 63% of those contracts beingfor defense. Some 51% of defense contracts are for products, 41% for services, the rest for R&D. Defense contracts represent 52% of overall defense spending. In FY 2018 alone, the Defense Department awarded over $358 billion in contracts. The top 10 defense contractors– Lockheed Martin, Raytheon, Northrop Grumman, Boeing, General Dynamics, United Technologies, L3 Technologies, Huntington Ingalls, Leidos, Booz Allen Hamilton – collectively receive some $167 billion a year in defense revenues. That amount exceeds the GDPs of more than 130 of the world’s countries. Lockheed’s defense revenues alone – $48 billion – exceeds the annual military expenditures of all but six countries; while numbers 2 and 3 – Raytheon and Northrop Grumman – each receive over $20 billion in defense revenues, thereby exceeding military expenditures of all but 13 countries.

To be fair, economically speaking, overall defense expenditures represent 3.5% of U.S. GDP; the defense sector provides over 4 million jobs; and roughly 10% of the $2.2 trillion in U.S. factory output goes to arms production. These are not inconsequential considerations for the politically minded and politically motivated among us. At the same time, the United States claims the dubious honor of ranking first in the world in international arms transfers, commanding 36% of the global market. This also isn’t inconsequential for thestrategically minded among us who recognize the potentially destabilizing, arms-race-inducing effects of such transactions.

Because Eisenhower’s warning conveyed concern about the well-being of democracy, it is especially important to note thatthe defense sector of industry assiduously exercises its First Amendment rights through lobbying and campaign contributions: $128 million spent on the former, $30 million on the latter in the 2017-18 federal campaign cycle alone. Since 1990, the defense sector has accounted for nearly $200 million in campaign contributions – dwarfed, in comparison, by other sectors, but nonetheless more than mere “beanbag,” as they say.

Eisenhower’s April 1953 “Chance for Peace” speech to the American Society of Newspaper Editors, delivered almost immediately after he took office, is even more telling even than his 1961 farewell address. Also broadcast nationwide, it is worth quoting at some length for the examples it affords:

Every gun that is made, every warship launched, every rocket fired signifies, in the final sense, a theft from those who hunger and are not fed, those who are cold and are not clothed.

This world in arms is not spending money alone.

It is spending the sweat of its laborers, the genius of its scientists, the hopes of its children.

The cost of one modern heavy bomber is this: a modern brick school in more than 30 cities.

It is two electric power plants, each serving a town of 60,000 population.

It is two fine, fully equipped hospitals. It is some 50 miles of concrete highway.

We pay for a single fighter plane with a half million bushels of wheat.

We pay for a single destroyer with new homes that could have housed more than 8,000 people.

This, I repeat, is the best way of life to be found on the road the world has been taking.

This is not a way of life at all, in any true sense. Under the cloud of threatening war, it is humanity hanging from a cross of iron.

Of course, that was then, when a destroyer cost something on the order of $6 million apiece, a bomber $2.4 million, a fighter jet $211,000. This is now, when an Arleigh Burke-class destroyer runs $1.2 billion (and a Zumwalt-class destroyer $4.5 billion), a B-21 stealth bomber $564 million, an F-35 Joint Strike Fighter $141 million. Thanks to the National Priorities Project, we can see what some selected tradeoffs akin to those Eisenhower offered might look like:

For the $19.95 billion we are paying for nuclear weapons and associated costs, we could create, for example, 359,099 infrastructure jobs for a year, or pay 246,838 elementary school teachers for a year.

For the $11.45 billion we are paying for the F-35 Joint Strike Fighter, we could provide, for example, 1.11 million military veterans VA medical care for a year, or 344,676 scholarships for university students for four years.

For the $1.51 billion we are paying for Predator and Reaper drones, we could provide, for example, 638,124 children or 424,963 adults low-income healthcare for a year.

These aren’t just incongruent apples-and-oranges tradeoffs; they are strategic tradeoffs. Those, most notably, who either produced or zealously support the NDS consider such tradeoffs anything but strategic, precisely because the types of domestic spending alternatives offered aren’t militarily relevant.

The NDS is a retro, militaristic call for a self-reaffirming, self-serving, self-fulfilling New Cold War that implicitly bows to and embraces a dominant and domineering military-industrial complex.The NDS claims that (a) the world we face today is determined by Great Power competition, defined in predominantly military terms, in which “revisionist powers” China and Russia seek to unseat us; (b) our supremacy in every domain of warfare – air, land, sea, space, and cyberspace – is now contested and begs restoration; (c) peace (through strength) is achievable primarily, if not solely, by being prepared for war; and (d) the primary line of effort for carrying out this “strategy” is heightened lethality.

The NDS would have us believe that the preferred vehicle for restoring America’s deserved primacy in all the aforementioned domains of warfare is the technological superiority provided by what is now labeled the “National Security Innovation Base.”  Such labeling seemingly implies that national security and defense are essentially synonymous, and that a future-oriented Innovation Base is somehow different (at least rhetorically) than a backward-looking Defense Industrial Base. Irony again intrudes here, by the way, since mobilization is implicitly given new life, but mobilization in the most parochial World War II, giant on-off switch terms.

For the various parties that make up the military-industrial complex, the New Cold War ideology put forth in the NDS is a boon of inestimable consequence, an incestuously preserved warfighting profiteer’s dream. It is also a tacit guarantee that defense industry, not government of, by, and for the people, will continue to call shots most of us don’t even acknowledge it calls on strategic priorities and commitments, military doctrine, the perversely irreversible American Way of War, technology, force structure and disposition, and manpower requirements. And, lest we forget, there is the massive international traffic in conventional arms that ensures the perpetuation and expansion of the arms industry (to “keep the industrial base warm,” of course), even as it feeds provocation, escalation, and destabilization abroad.

Though it may seem hyperbolic, even alarmist, one is tempted to harken back to the post-World War I period, when soul-searchingly pejorative “merchants of death” rhetoric was in vogue. With irony again our guide for the moment, one of the most outspoken critics of war profiteering was Marine Major General Smedley Butler, a two-time Congressional Medal of Honor recipient who had spent his 34-year career in uniform dutifully fighting various colonial wars at the turn of the 20th century. His highly publicized 1935 speech/short book War is a Racket spoke bluntly in terms worth remembering today:

War is a racket. It always has been. It is possibly the oldest, easily the most profitable, surely the most vicious. It is the only one international in scope. It is the only one in which the profits are reckoned in dollars and the losses in lives. A racket is best described, I believe, as something that is not what it seems to the majority of the people. Only a small “inside” group knows what it is about. It is conducted for the benefit of the very few, at the expense of the very many. Out of war a few people make huge fortunes.

Let us now, if we are to restore or establish strategic sanity in this post-post-Cold War era, revisit these words and those of President Eisenhower. We – the taxpayers, the citizenry, the source of citizen-soldiers, the repository of popular sovereignty – owe ourselves, our progeny, and our future nothing less.