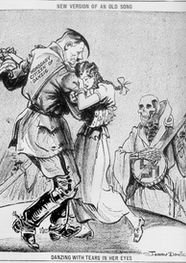 This editorial cartoon by Jerry Doyle, published in the Philadelphia Record on April 22, 1939, contributed to the erroneous perception among some Americans that the people of Danzig were opposed to Hitler. In fact, election results in Danzig demonstrated overwhelming support for the Nazis.

“Danzig is a German city and wishes to belong to Germany!”

With that declaration eighty years ago this week, Adolf Hitler once again threw down the gauntlet to the international community. No other country had interfered when Nazi Germany illegally remilitarized the Rhineland in 1936, annexed Austria in 1938, and gobbled up Czechoslovakia in 1938-39. So now Hitler set his sights on his next target: the city-state of Danzig.

Situated strategically on the coast of northwestern Poland but inhabited overwhelmingly by ethnic Germans, Danzig had gone back and forth between German and Polish rule over the centuries. The Versailles Treaty after World War One established it as a “Free City” under the control of the League of Nations.

But Hitler did not act immediately. In the mid and late 1930s, the Nazis were still in the process of re-arming and testing the West’s responses to their actions. The failure of the international community to challenge Hitler over the Rhineland or Austria sent a clear message. That was followed by the sacrifice of Czechoslovakia, in the 1938 Munich Agreement. Then came Hitler’s announcement to the Reichstag on April 28, 1939, demanding the surrender of Danzig along with a land corridor leading to it.

Reporters were keen to learn how President Franklin D. Roosevelt would respond to this latest, blatant challenge by the Nazi leader to the authority of the League of Nations. FDR, however, was not too keen to comment.

On April 29, the New York Times reported:  “Anticipating the nature of Herr Hitler’s address and the barrage of questions on his reaction to it that would have been inevitable under the circumstances, the President late yesterday had canceled his usual Friday press conference.”

The Times added that during President Roosevelt’s meeting with the prince and princess of Norway that day, a conversation was overheard in which the president was asked what he thought of Hitler’s Danzig threat. FDR reportedly responded,

“How can any one have a reaction to a speech that lasts more than two hours?” And then: “Six o’clock in the morning is rather early, don’t you think?”

The next day, April 30, the president spoke at the opening of World’s Fair in New York City. In his first public remarks since the Hitler speech, FDR spoke vaguely of the need for “peace and good-will among all the nations of the world,” but made no mention of the Nazi leader or the fate of Danzig.

Finally, on May 2, the president held a regularly scheduled news conference, at which point there was no way avoid questions about his reaction to Hitler’s threat. Here’s how the exchange went:

Q: Have you seen the full text of the Hitler speech yet?

FDR: Only the one that came out in the papers. Probably the State Department is still translating it.

Q: It takes a while, I imagine.

FDR: Do you suppose that the text was handed to them, translated into English in Berlin?

Q: Yes, sir; one of the stories said it was handed to them in an English translation.

Q: Official translation. The English translation was flown to London, I saw in one story.

FDR: Well, the State Department was doing its regular translating for what they had taken down on the verbal stuff. I don’t know how much he followed the text. As you know, sometimes I do not stick to the text.

President Roosevelt is best remembered for leading America towards military preparedness  and, later, in the war against Nazi Germany—yet he was remarkably reluctant to even verbally criticize Hitler in the 1930s.

Throughout the pre-war period, FDR strove to maintain cordial diplomatic and economic relations with Nazi Germany. He sent Secretary of Commerce Daniel Roper to speak at a German-American rally in New York City in 1933, where the featured speaker was the Nazi ambassador to Washington, and a large swastika flag was displayed on stage. The president allowed U.S. diplomats to attend the mass Nazi Party rally in Nuremberg in 1937, and his administration helped the Nazis evade the American Jewish community’s boycott of German goods in the 1930s by permitting the Nazis to deceptively label their goods with the city or province of origin, instead of “Made in Germany.”

Despite the intensifying anti-Jewish persecution in Germany in the 1930s, Roosevelt not only refused to criticize the Hitler government, but he personally removed critical references to Hitler from at least three planned speeches by Interior Secretary Harold Ickes in 1935 and 1938. Even Roosevelt’s criticism of the infamous Kristallnacht pogrom—a public statement which has often been cited as proof of the president’s willingness to denounce the Nazis—did not contain a single explicit mention of Hitler, Nazism, or the Jews.

Roosevelt said nothing about Hitler’s action in the Rhineland (1936); applauded the Munich agreement, which handed western Czechoslovakia to the Nazis (1938); and, eighty years ago this week, ducked reporters’ questions rather than utter a single critical word regarding Hitler’s threat to Danzig.

FDR was, of course, saddled with the burden of a largely isolationist public and Congress. He was understandably reluctant to be seen as doing anything that might seem to edge America close to war with Germany. Yet a president’s job is to lead, not to follow. A few words from the White House directly taking issue with Hitler’s aggressive actions and persecution of the Jews could have helped alert the public to the Nazi danger.

Explaining President Roosevelt’s refusal to comment on Hitler’s remilitarization of the Rhineland in 1936, the diplomatic correspondent of the Washington Evening Standard reported that the president “is determined not to take sides under any circumstances.” But there are circumstances when, even if it is unpopular, a president needs to publicly “take sides”—to take the side of good against the side of evil.

A stronger response from President Roosevelt over Danzig or the earlier crises also would have indicated to Hitler that there might be consequences for his actions—something that was particularly important in the early and mid 1930s, when the Nazi leader was still testing the waters.

“It is not trade but empire that is Hitler’s goal,” a New York Times editorial acknowledged following the Danzig speech. “How far he will go and how fast he will go toward acquiring it will depend solely upon how much opposition is offered him.”