The Red Scare: From the Palmer Raids to Joseph McCarthy to Donald Trump 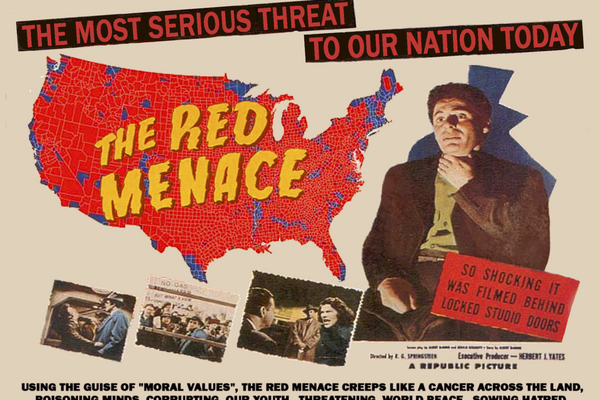 In the immediate post World War I era, Attorney General A. Mitchell Palmer was considering a bid to become the Democratic Presidential nominee in 1920 to succeed President Woodrow Wilson.  To raise his profile, he claimed there was a massive wave of Socialists and Communists in America working to undermine the nation in the aftermath of the Russian Revolution of 1917.  Palmer arrested and detained thousands of suspected radicals as part of the Red Scare. Many people were detained for months without trial or protection of their basic constitutional rights, until some were deported and others were released without charges.

Palmer had a very eager and zealous chief assistant, J. Edgar Hoover.  Hoover performed so well under Palmer, Palmer recommended Hoover become the head of the newly constituted Federal Bureau of Investigation. President Calvin Coolidge indeed selected Hoover to lead the FBI in 1924, beginning Hoover’s 48-year career as the Bureau’s head until his death in 1972.

Like his predecessor, Hoover’s tactics often violated Americans’ civil liberties. Under his leadership, the FBI engaged in unconstitutional behavior, particularly in the post World War II era as the U.S. fought Communism at home and abroad during the Cold War. Many in academia, in Hollywood, and in government were purged based on accusations that they were Socialists or Communists and were spying for the Soviet Union.

One beneficiary of this Second Red Scare in the late 1940s and early 1950s was a Republican United States Senator, Joseph Raymond McCarthy, who was rated the least influential and accomplished of all US Senators by a periodical.  Thinking ahead to his reelection in Wisconsin in 1952, McCarthy decided to raise his profile by accusing people in government and all walks of life of being Socialists and Communists.  McCarthy became extremely popular among a third of the American population, and with the exception of a few journalists and US Senators who spoke and wrote against McCarthy, he was able to run rampant in the last years of the Presidency of Harry Truman and the first two years of the Dwight D. Eisenhower Presidency. He finally went too far in his accusations, and was censured by the US Senate, a rare action in the history of the upper body, in 1954.

During his nearly five years of power from February 1950 to December 1954, McCarthy was aided by a zealous young man not all that different in character or motivation from J. Edgar Hoover three decades earlier.  McCarthy’s chief aide was attorney Roy Cohn, who zealously attacked innocent people who were accused of being Communists (Reds), or soft on Communism (Pinkos). Many believed he lacked any sense of ethics or honor and he was much feared.  Even after McCarthy fell from favor and then died in 1957, Cohn’s prominence continued and spent his remaining career as an attorney who often chose to represent reprehensible elements of society, including Organized Crime. He was also known for his wild social life.

Then, Roy Cohn met a young real estate entrepreneur named Donald Trump. The two men became close friends and Cohn impressed upon Trump how to exploit and play “hard ball” to gain ever more wealth and public influence.  As others have argued, Cohn was one of the most influential people in the development of Trump’s public persona and political views.

Trump learned to exploit his critics, focusing on their weaknesses or shortcomings, to harm their reputations. Trump stoked fear in his goal to help his rise to power and march to the Presidency.

Once in the White House, Trump worked to undermine civil liberties and civil rights, as A. Mitchell Palmer, J. Edgar Hoover, Joseph McCarthy, and Roy Cohn had done in earlier generations.  Utilizing racism, nativism, and Islamophobia, Trump also exploited the issue of gay and transgender rights, following the lead of his Vice President, Mike Pence, in promoting the elimination of gay and transgender people in the US military, despite their major contributions.  He undermined support for gay equality of treatment as a protected group, as had been pursued by Barack Obama during his Presidency.

Trump is clearly using similar tactics as Palmer, Hoover, McCarthy and Cohn did to promote his agenda and undermine civil liberties and civil rights. But he is more dangerous than his predecessors as only Donald Trump has reached the pinnacle of the Oval Office. Trump has learned very well from their examples, and it requires vigilance and activism to cope with the threat he represents every day.