The English Diggers, the "Commons," and the Green New Deal 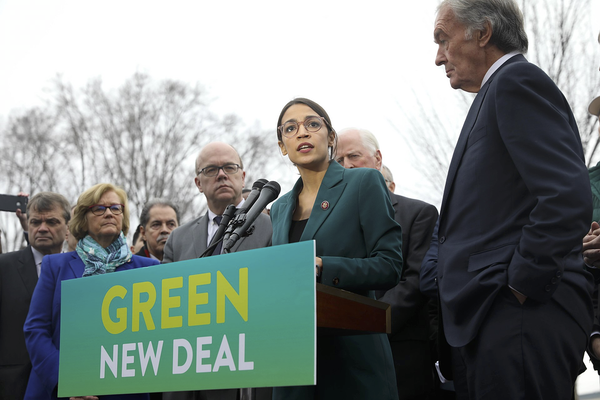 In April of 1649 a group of radicals, some veterans of the recent English civil wars, occupied a bit of common grass on a plot known as St. George’s Hill in Surrey and they began to grow vegetables. These radicals called themselves “True Levellers” to distinguish themselves from another, more moderate political faction, but everybody else called them “Diggers” in reference to both a scriptural passage as well as their literal activity on the hill. In a spirit of communal fellowship, they invited the people of Surrey, then suffering under exorbitant prices food prices, to “come in and help them, and promise them meat, drink, and clothes.”

Gerard Winstanley was the major theorist of the group, and in his manifesto The True Levellers Standard Advanced he advocated for a form of public ownership of land, seeing the idea of a commons not as radical, but rather as a restitution. In Winstanley’s understanding the commons were a feature of English rights, that had been violated in the development of privatization, whereby enclosures had begun to partition off formerly collective lands, which were now owned by individual aristocrats and noble families. The result, since the end of the fifteenth-century, had been increasing inequity, with the landless poor often not having space on which to graze their animals. There was an explicitly ecological gloss to Digger politics, with Winstanley claiming that “true freedom lies where a man receives his nourishment and preservation, and that is in the use of the earth.” The dream of the commons as exemplified by the Diggers has something to say in our current moment, as we face not just rising prices on vegetables, but indeed the possibility of complete ecological collapse.

Critics of supply-side economics point to the Reagan and Thatcher revolutions of the 1980’s as being a moment whereby the traditional social contract, which held that a democratically organized state had a responsibility of care towards collective rights, had begun to fray. This analysis isn’t wrong, that the conservatives of that decade attacked the welfare state in favor of privatization, a shell-game redefinition of “freedom” whereby the undemocratic allocation of resources and power was shifted to the few, who’ve demonstrated a perilously uncaring stewardship towards the environment. But I’d argue that there has long been a Manichean struggle between an understanding of democratic control of resources versus a certain aristocratic libertarianism. The “reforms” of the later go back far in our history, with thinkers like Winstanley understanding what’s lost when the commons are turned over to the control of fewer and more powerful people. Results of that ignoble experiment now threaten to end life on earth as we know it.

If it seems as if there has been an increasing attack on the idea of the commons when faced against the neo-liberal forces of privatization, then perhaps we should draw some succor from the English historian Christopher Hill, who noted in his classic The World Turned Upside Down: Radical Ideas During the English Revolution that the “Diggers have something to say to twentieth-century socialists,” and perhaps twenty-first century socialists as well. In 2019, I would argue, the idea of the “commons” as a space of collective ownership, responsibility, engagement, and possibility must be a metaphor that the left draws from rhetorically, wrenching it free from the realms of theory and philosophy, and which we can use to more fully define a concept of freedom which is true for the largest possible number of humans.

A good idea never really dies. Even the right-leaning The Economist in an article entitled “The Rise of Millennial Socialism” admits that the newly resurgent left in both Great Britain and the United States’ Democratic Party has “formed an incisive critique of what has gone wrong in Western societies.” Partially this has been by recourse to traditional labor politics, but as The Economist notes it’s only on the left that there has been any credible attempt to solve the apocalyptic threat of climate change, the right either burying their heads in the sand or engaging in irrational and unempirical denialism.  Part of the new socialist movement’s environmental approach is a return to how the Diggers understood stewardship of the land, so that in policy proposals like Representative Alexandria Ocasio-Cortez and Senator Edward Markey’s Green New Deal we arguably have the emergence of a new ethic that could be called the “people’s right to the natural commons.” As Jedediah Britton-Purdy wrote in The New York Times, “In the 21st century, environmental policy is economic policy.”

Just as the Diggers hoped to redefine the commons back towards its traditional understanding, so too do todays eco-socialists see this as a fruitful moment in which to expand the definition of freedom as meaning “something more than the capitalist’s freedom to invest or the consumer’s freedom to buy,” as the authors of a recent Jacobin article on the Green New Deal write. Kate Aronoff, Alyssa Battistoni, Daniel Aldana Cohen, and Theo Riofrancos write that for too long the “Right has claimed the language of freedom. But their vision of freedom as your right as an individual to do whatever you want – so long as you can pay for it – is a recipe for disaster in the twenty-first century, when it’s clearer than ever that all our fates are bound up together.” In opposition, the authors argue that the Green New Deal presents the freedoms of a commonwealth, the “freedom to enjoy life, to be creative, to produce and delight in communal luxuries.” I’d add a freedom of access to our collectively owned environment, including its climate, its land, its oceans. As Woody Guthrie sang with patriotic fervor, “This land is your land, and this land is my land.”

Increasingly the mass of people has come to understand that the exorbitant wealth of the upper fraction of the 1% signal something more than mere luxury, but rather the transfer of undemocratically manifested political power and the ability to do with the earth and its climate whatever they want, even if the entire ecosystem lay in the balance. By contrast, eco-socialism requires a return to the Diggers’ promise, not the abolishment of private property, but an equitable say in how the resources which belong to the common treasury of all people of the earth should be allocated. Why should executives at Exxon have any ability to decide that they’re alright with apocalypse just because it helps their shareholders? Remember that we’re all shareholders of the earth. Far more pragmatic to consider the potential of what philosophers Michael Hardt and Antonio Negri write about in Commonwealth, when they argue that an embrace of the commons is a rejection of “nihilism,” for in turning away from an apocalyptic capitalist economics we can rather imagine “opening up the multitude’s process of productivity and creativity that can revolutionize our world and institute a shared commonwealth.”

If it seems as if the Leveller’s nascent eco-socialist revolution failed, that’s not because there isn’t a golden thread connecting them to their own past and our current moment. Such beliefs about the commons were held by those participants of the aforementioned Peasant’s Rebellion in the fourteenth-century, and similar ideas about a collective right to some part of the environment can be seen everywhere from the commons at the center of many colonial New England towns goi to the environmental progressivism of President Theodor Roosevelt and the establishment of national parks. A collective right to a natural common, whereby we once again reaffirm the interdependent and communal ownership of the earth sounds as a radical idea, but a shift towards understanding our environmental crisis in this manner might be the spiritual change required to fully grapple with climate change.

At St. George’s Hill, Winstanley didn’t understand the occupation as being anarchic, but rather conservative in the truest sense of that abused word, as the root for the word “conservation” and as a return to a “merry old England.” As historian Peter Linebaugh explains, the commons have “always been local. It depends on custom, memory, and oral transmission for the maintenance of its norms rather than law, police, and media.” For the Diggers, it was nascent capitalism which was truly radical, and they who rather advocated a return to how they defined the natural state of things. Half a century before the occupation at St. George’s Hill, and the anonymous author of a broadsheet ballad of 1607 wrote that “The law locks up the man or woman/Who steals the goose from off the common/But lets the greater villain loose/Who steals the common from the goose.” The Diggers’ rhetoric has even earlier precursors, their politics recalling a rhyming couplet of the Lollard priest John Ball who helped lead the Peasant’s Rebellion of 1381, and who used to sing a song asking where aristocrats could possibly have been in a state of nature, for “When Adam delved and Eve span, /Who was then the gentleman?”

In The Century of Revolution: 1603-1714, Hill writes that “Freedom is not abstract. It is the right of certain men to do certain things.” We think of “freedom” as an innate quality – and it is – but we have those with a very limited definition of the word run rough-shod over our environment, where the freedom which has been defined is the right of a very small number of men to make momentous and detrimental changes to the world itself. A world which should be our shared commonwealth. Of course, proposals like the Green New Deal are upsetting to elites who have long profited by their small definition of freedom as being merely their freedom to exploit the earth. Surrey nobles were also less than pleased by the presence of hundreds of radicals encamped on St. George’s Hill, and by August of 1649 the Diggers lost a court case advocating for their squatter’s rights, so they voluntarily abandoned the plot before the threat of violence would have forced them to do so. Linebaugh writes that the “commons is invisible until it is lost.” Today St. George’s Hill is the site of an exclusive gated community and a tennis club. Maybe it’s time to tear down some of those enclosures again?