Levittown, PA and The “Northern Promised Land That Wasn't”

by Jasmine Torres and Alan Singer 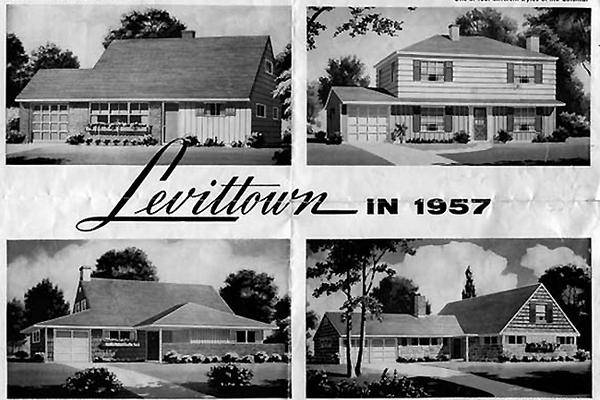 Racially incendiary comments and actions by the Trump administration—including his attacks on undocumented immigrants and demand to build a wall to keep out Latino refugees from Central and South America—have escalated racial and ethnic tension in the United States. The overt and covert racism that helped elect Donald Trump in 2016 is a deep-rooted phenomenon in both the Southern and Northern United States.

In a 1960 essay in Esquire magazine, James Baldwin wrote that when Blacks migrated North during and after World War 2, “they do not escape Jim Crow: they merely encounter another, not-less-deadly variety.” Some believed Northern racism, while covert, was worse than racism in the South because “At least there, you haven't got to play any guessing games!” Rosa Parks, who moved from Alabama to Detroit in 1957, described that city as the “northern promised land that wasn't.”

Northern racism, while often less violent than that of the South, was endemic. Palisades Amusement Park in Fort Lee, New Jersey barred Blacks from using its swimming pool into the 1950s. In Connecticut, a law permitting local and private control over Long Island Sound beaches kept the beaches racially segregated until the 1970s.

In February 1964, civil rights activists in New York City led a one-day school boycott to highlight their demands to desegregate the city's schools and improve the conditions in schools predominantly attended by Black and Puerto Rican students. Almost half a million children stayed home from school. White New Yorkers opposed the boycott. In a September 1964 New York Times poll, a majority of White New Yorkers “believed the Negro civil rights movement had gone too far.”

In Levittown, Pennsylvania Northern racism escalated to the hateful and more overt levels of Southern white behavior towards Blacks. Taking advantage of federally subsidized mortgages for World War II veterans, Levitt & Sons built suburban Levittowns in New York, Pennsylvania, and New Jersey that barred African Americans. Clause 25 of the original lease for the Levitt houses, stated that the houses could not “be used or occupied by any person other than members of the Caucasian race.” Although the company was forced to remove the clause after the 1948 Shelly vs. Kraemer Supreme Court Case, the Levitts continued to use extra-legal means to keep the developments racially segregated.  William J. Levitt denied having any anti-Black bias, but claimed “I have come to know that if we sell one house to a Negro family, then 90 to 95 per cent of our white customers will not buy into the community. That is their attitude, not ours.”

In 1957, Levittown’s racial policy finally boiled over into Southern-style racial violence. Levittown, Pennsylvania, located about a half hour northeast of Philadelphia in southern Bucks County, boasted 15,500 ranch-type dwellings. Escalating racial attacks on a Black family that purchased a home in the community were documented in a series of New York Times articles from August 16 through December 10. The articles also reported on efforts by some community members to welcome the new family.

On August 15, 1957, Pennsylvania Governor George Leader ordered a State Police detachment to Levittown “to cope with an outbreak of bad feeling over the arrival of the first Negro homeowner.” For three consecutive nights, a mob of 200-350 white “men, women and children” stoned a house in the Dogwood Hollow sub-divisionpurchased by an African American family. The group smashed a window and at least six of the rioters were arrested. The Levittown protests were led by a group called the Levittown Betterment Association, which identified its main purpose as “restoring of our entire white community.”

William Myers Jr., who purchased the Levittown, PA home, was born in York, Pa., completed a year at the Hampton Institute in Virginia before he was drafted into the military in 1943. After the war Myers returned to Hampton and completed his degree. He planned to earn an engineering degree at the Drexel Institute in Philadelphia while working as a laboratory technician for the C. V. Hill Company in Trenton, New Jersey. His wife, Daisy Myers, was a graduate of Virginia Union College in Richmond and did graduate work at New York University. In an interview with the New York Times, Myers explained that the “tumult” took him by surprise. Before purchasing the house he had talked with several of his neighbors-to-be in Levittown’s Dogwood Hollow section and their reactions were cordial, sometimes even warm. “I expected some trouble, but I never thought it would be so bad.” 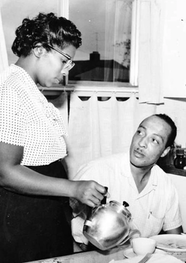 Despite the attacks on his new home, prior to and after the family moved in, Myers announced that he, his wife Daisy, and their three children would not be deterred by the hostilities. “We are church-going, respectable people. We just want a nice neighborhood in which to raise our family and enjoy life.” Myers, who paid $12,150 for the three-bedroom house, reported he received an offer of $15,000 to resell it, but declined the offer because “we didn’t buy a home in Levittown to make money.”

On August 20, the Levittown protests turned violent. “Club-swinging troopers of the state police and local township” dispersed a crowd of approximately 300 people by the Myers house after a police sergeant was knocked unconscious by a thrown rock. According to reports, the crowds now mostly consisted of teenage boys, so the police instituted a 9 P.M. curfew for “youths under 16 not accompanied by a parent.”

Racially charged incidents continued into September. On September 6, a five-foot cross was burned on the front lawn of Lewis Wechsler, who lived next door to the Myers. Wechsler had helped the Myers family move into their home and “stood by them when crowds staged protests on the streets last month.” Three weeks later, on September 25, police discovered the letters “K.K.K’” smeared in red paint eighteen-inches high on the wall of the Wechsler house and a large anti-integration poster on the Myers lawn depicting a white woman kneeling in fear before a Negro man.” William Myers also reported to the police that they had been receiving “obscene phone calls” and anonymous letters that “have the earmarks of the Ku Klux Klan.”

On September 24 police placed a round-the-clock guard on the Myers house with extra night-time patrols in the area  “because a vacant house next to the Myers was being used as a gathering place for residents who objected to their living in the community.” Eldred Williams, a Levittown resident and spokesman for the Levittown Betterment Association, claimed he was the caretaker for the property and “attached an American and a Confederate flag” to the house. The “social club” was eventually shuttered by court order.

The incidents continued in October when “anti-Negro leaflets” were placed on car windshields during a local parent-teacher meeting. The leaflets, carrying no identification, depicted Negroes dancing with white girls and carried the legend ‘Wake Up, America, for Your Country’s Sake.’” In December, the Commonwealth of Pennsylvania finally asked the Bucks County Common Pleas Court to grant a permanent injunction against Levittown residents who were continuing to harass the Myers family and the incidents subsided.

The good news from Levittown was that every white resident and local organization was not racist. A local committee was formed opposed to “violence and racial bias.” The Myers family was welcomed by Lewis Wechsler and a group called the Dogwood Hollow Neighbors, who invited William and Daisy Myers to join. The Reverend Ray Harwick, minister of the Levittown Evangelical and Reformed Church, and Rabbi William Fierverker of the Levittown Jewish Center, strongly supported the Myers and rallied their congregants to welcome them. As tension escalated in the Dogwood Hollow section of Levittown, the Bristol Township Board of Commissioners unanimously adopted a declaration pledging protection to all persons and their property “regardless of race, religion, or color.” At the same time school officials announced that they had hired two African American teachers to work at locals schools, although they denied the hiring had anything to do with efforts to integrate the community.

The Myers family also received support from the American Friends Service Committee, representatives of the National Jewish Labor Committee, and regional officials of the United Steel Workers union. Their lawyer, Samuel Snipes was a Quaker peace activist who worked for the United Nations in Germany after World War II helping to relocate refugees.  In a 1999 interview Snipes told about how while he was standing outside the Myers’ house several hundred protesters called him a “betrayer of white people” and shouted “thirty pieces of silver.” He believed this taunt was somehow meant to compare his support for the Myers to the actions of Judas Iscariot.

American suburbs still often reflect segregation patterns established in the 1940s and 1950s. As of the 2010 census, Levittown, Pennsylvania remained 87.7% White with 5.1% residents of Hispanic or Latino ancestry, and only 3.6% Black or African American and 3.8% other. One good sign for the future is that each of the electoral districts that make up Levittown, Pennsylvania voted Democrat in the 2016 Presidential election by at least 10%.