Is the Green New Deal Impossible?

James Brewer Stewart is the James Wallace Professor of History, Emeritus at Macalester College. Stewart has written or edited thirteen books addressing the problem of slavery’s abolition and is the founder of Historians Against Slavery, an international network of scholars and activists that brings historical knowledge to bear on the problem of contemporary slavery. 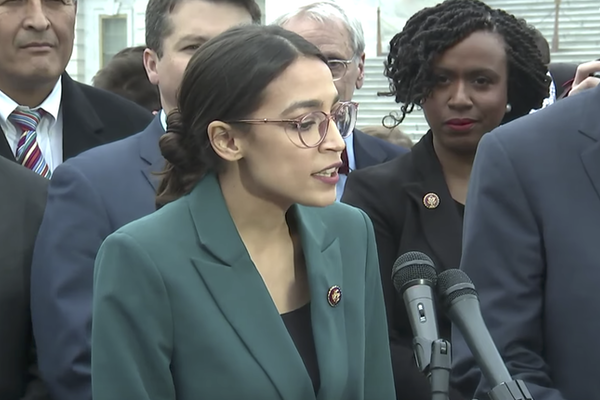 If you are sneering at advocates of the Green New Deal as impractical dreamers, misguided fanatics or headline seeking demagogues, here is a lesson from our nation’s past that should make you think again. Not only are these agitators deadly serious, but they have substantial historical precedent to back them up.

Their demand that we abruptly abolish our carbon driven economy in the space of a single decade and redesign it around renewable energy sounds wildly impractical on first blush. But a critical examination of our nation’s past strongly suggests that they have it within their reach to dramatically alter the way we choose to live as the likelihood of environmental catastrophe grows ever larger.

The history lesson that backs this bold assertion comes from the early 1830s when an unruly handful of people very much like the Green New Dealers, the fearlessly iconoclastic abolitionists, suddenly issued an extraordinary challenge to the political status quo. They demanded that the three or so million African Americans living in the South be permanently liberatednot sooner or later, but this instant. Their slogan was “Immediate Emancipation.” Not a dime should go in compensation to their former owners, whose collective investment in their “chattel property’ amounted to the economy’s second largest capital asset. Only the aggregate value of the nation’s total holdings in real estate exceeded the value of their investments in the enslaved. No matter, insisted these abolitionists.  The moral imperative to liberate the grievously oppressed far overbalanced any selfish concerns about profit and loss.

The mission the abolitionists set for themselves was to persuade their fellow citizens to embrace this truth and act on it. They called this technique “moral suasion.” Most of their fellow citizens initially dismissed them as being hallucinatory but their three decades of ceaseless agitation ultimately persuaded many to take some their own stands against slavery.  Scholars today hold them in high regard as powerful advocates for racial equality and resourceful defenders of human rights.

Let us now whisk ourselves back into the present where awaiting us are the aforementioned Green New Dealers, every bit as much the unruly iconoclasts as those old-time abolitionists. Like the abolitionists they demand profoundly drastic changes that are, it seems, patently impossible: “convert 100% of the power demand in the United States” to “clean, renewable and zero-emission energy sources.” Upgrade “all existing buildings” to meet existing energy efficient requirements.” Expand high speed rail everywhere so as to eliminate air travel. All within the next ten years.

The moral obligation to prevent the catastrophe of unchecked global warming, they argue, overwhelms all concerns about economic consequences. The task these Green New Dealers set for themselves is to mobilize voters all over the country to demand enactment of their unprecedented legislative agenda. How? By appealing to them to open and change their minds. Their tactic is “moral suasion,” much like the abolitionists and so is the terrifying moral urgency of their cause.

So to summarize: Back in the day the abolitionists demanded the overthrow of “King Cotton” by liberating its labor force. Today Green New Dealers seek to overthrow “King Carbon” by transforming our energy resources, a goal at least as disruptive as was immediate slave emancipation. For precisely this reason, it is impossible to decide which group of insurgents faces(ed) the more powerful opponents.

Staring down the abolitionists was the South’s all powerful planter class, the wealthiest, most self aware, best organized and most politically potent interest group in all of pre- Civil War America (five of our first seven Presidents were notable slaveholders). For the Green New Dealers the equivalent is the formidable network of agencies and agents that promote, protect and consume “big energy.” To imagine the enormity of it all think at once about the Koch Brothers, Exxon Mobil and the fact that the United States is the largest oil consuming nation in the world (18.9 million barrels per day). King Cotton then, King Carbon now, each fully arrayed against their most extreme ideological adversaries. Giving their full support to both juggernauts, most tellingly, was /is the heavy weight of public opinion.

During the 1830s the abolitionists’ opening campaign for immediate emancipation forcibly confirmed this brutal truth. Since the overwhelming majority of white Americans had convinced themselves long ago that black skin confirmed innate inferiority,the prospect of three million emancipated African Americans “let loose”in civil society drove them to extreme actions. They broke up the abolitionists’ meetings, attacked free black communities, intimidated abolitionist newspaper editors and voted en masse for politicians who supported legislation to suppress the abolitionists’ freedom of expression. When the riots subsided, most white Northerners continued to express hostility to abolitionism with sullen apathy. Below the Mason Dixon line, any suspicion of abolitionist activity prompted brutal retribution.

Compared to the abolitionists, the prospects for success for Green New Dealers seem at this moment just as unpromising.  Despite ongoing protests and law suits,oil and gas pipelines proliferate alongside rapidly multiplying fracking operations and drilling leases. Drivers spurn high mileage small sedans for Ford F150s, SUV Cross-Overs and Cadillac Escalades. Delta Airlines and enforceable air quality standards occupy alternate universes. Federal subsidies supporting solar technology are dwindling fast…and so forth. Overwhelmed by the enormity of the environmental crisis, many Americans simply despair. And the brute fact is that that any hint of separating workaday Americans from their internal combustion transport would surely incite in-the-streets rebellion. Who faces/ faced the more daunting prospects, abolitionists or Green New Dealers? It’s a toss-up.

We learn, above all, that for all their deep moral insight, the abolitionists demand for immediate emancipation was all aspiration, no plan. It contained not a shred of down-to-earth politically engaged public policy. The problem of slavery was so all-encompassing that abolitionists found it impossible to undermine incrementally. The only options left to them were condemning, prophesying and resisting. As a result, during three long decades of struggling to change people’s minds, abolitionists watched helplessly while slaveholders doubled their portion of the national domain. Profits wrung from enslaved labor doubled then doubled again. The enslaved population shot up by 25% from three to four million. In response to “moral suasion,” slavery waxed fat, white supremacy endured.

Under these conditions, as historians Eric Foner, James Huston and James Oakes have all emphasized, slavery’s path to extinction was plotted not by the abolitionists, but by mobilized northern voters whose militant response to the continued expansion of slavery was to demand the construction of an “antislavery bulwark” to stop the plantation owners’ march westward and a new Republican party pledged to maintain such a barrier. Theirs was a forceful expression of “Not in my back yard,” not a bold initiative to unshackle King Cotton’s labor force.  Employing “moral suasion” in the hope of changing minds and moral outlooks in favor of African Americans had utterly failed. The highest aspiration of all—racial equality—moved away ever further as the abolitionists clung to the margins of the politics leading to Civil War.

Attentive Green New Dealers reading this essay know already why this plunge into abolitionism’s history offers them such powerful reassurance. They’ve managed this feat by mapping the stark differences they discern between their movement and that of the abolitionists, not the similarities highlighted thus far. Each of these contrasts identifies one of the Green New Dealers significant strengths by setting it against a principal characteristic of the abolitionists. It’s a straightforward exercise and it makes it perfectly clear that history, applied comparatively, is on the side of the Green New Dealers.

--Abolitionists: Driven By Abstract Beliefs, Not By Pressing Deadlines /Green New Dealers: Driven Entirely By Scientifically Predicted Disaster Dates.... and so forth.

In the end, as both this essay and this specific listing demonstrate, the New Green Deal exhibits all vital strengths of the abolitionists, one of our history’s most dynamic, disruptive, egalitarian and ethically grounded social movements. At the same time it is burdened by none of abolitionism’s limitation even as it makes itself into a powerful hybrid mixture of a grass roots organization, political pressure group, guardian of the public good and legislative insurgency. In this particular historian’s best estimate, the Green New Dealers are the equivalent of the abolitionists reincarnated, but also so very much more than that and are poised to exert an enormous impact. “All things are ready, if our mind be so.” ---― William Shakespeare, HenryV.