What Can One Ecologist Teach Historians?

John Gaudet, a professional ecologist has worked with the U.S. government and carried out research under grants from the National Geographic Society.  As an ecologist and primary environmental advisor he is now a writer and consultant.  His work has appeared in the Washington Post and he remains active in African, agricultural, and conservation/environmental agencies. 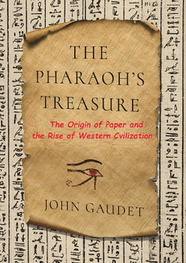 On the December 12, 2018 episode of Jeopardy, Alex Trebek gave Faris Alikhan, a speechwriter from Atlanta, Georgia, a clue. “Subtitled ‘The Plant that Changed the World’ in John Gaudet’s study, this species was first widely used in Ancient Egypt.What is the answer?’”

Faris registered a blank even though he had $16,000 riding on it, and so the host moved on to the second contestant, Elana Schor, a journalist from Washington, D.C., who also passed.  Mary Kate Moriarty, a dentist from Dumfries, Virginia, volunteered an answer, “The what is wheat.”

This was not a bad response, considering how important wheat was and still is in Egypt, but, it is wrong in several ways, the least being that wheat is a collective name for several species. Alex specifically asked for only one.

The word they were looking for was “papyrus.” Once I got over the incredible surprise of seeing my name on my TV screen, I looked at the three contestants and couldn’t help but be surprised that none of them knew the answer. This confirmed my suspicion that much like the contestants on Jeopardy, many historians might still be confused about papyrus and ecological history.

A recent review of my latest book (The Pharaoh’s Treasure: the origin of paper and the rise of western civilization, Pegasus, NY,) brought this point home to me when the reviewer reminded me that I’m an ecologist and history was by no means my expertise.  I realized that at least in this case, I had missed my chance to get across my message.  The story told in my book was supposed to be an account of what happened during the early days when papyrus paper was the most common medium used throughout the world.  The making of this kind of paper, and the books and documents that came from it, represented to me one of the most astonishing and exciting stories in the history of the world.

Ancient Egyptians used papyrusto build millions of reed boats, huts, houses, mats, and fences,and make millions of miles of rope and millions of sheets and rolls of paper. Much of the rope and paper was exported to earn foreign exchange (hence the name of the book, The Pharaoh’s Treasure).  It also provided millions of tons of locally dried stems used as fuel for the bath-fire stokers in Roman times in towns like Alexandria.

Despite the importance of papyrus, as far as I could see its history hadnever been told in its entirety until I wrote the book.  The reviewer wasn’t concerned about that, and my excuses that the book was written as narrative non-fiction and was designed for a general reading public didn’t cut it.  According to him there was no substitute for history plain, simple and accurate to a fault.

I still wondered if there wasn’t something in the book worth his while.  Then I thought of one item that should have impressed him, a quote from the 1911 edition of the Encyclopedia Britannica.  It was an item written by “E. M. T.”, the abbreviation used by Sir Edward Maunde Thompson, the first director of the British Museumandan historian of the first degree.

He wrote, “it seems hardly credible that the Cyperus papyrus could have sufficed for the many uses to which it is said to have been applied and we may conclude that several plants of the genus Cyperus were comprehended . . .”

As an ecologist and particularly one specializing in the ecology of tropical African swamps I immediately knew that Sir Edward was very far off base.  E.M.T. was writing after papyrus had disappeared from Egypt (after 1000 A.D.) and well before modern ecological studies of the 20th and 21st centuries.  These modern studies show that both ancient and modern papyrus plants have an enormous rate of production.  We now know that in the ancient world no other species was needed,because papyrus was more than capable of providing for the needs of the people.

Understanding ecology can help historians explain ancient history and human behavior. For example, ecological factors drove people’s choice of early writing materials. The Sumerians lived in the ancient floodplains of the Tigris and Euphrates on the eastern arm of the Fertile Crescent. Their environmentwas dominated by reeds, a situationvery similar to the wetland environment of ancient Egypt on the opposite western arm of the same Crescent. But the Sumerians used clay tablets to write on while the Egyptians used paper.  Why?  Because the dominant reed growing in the wetlands of Mesopotamia was a grass reed, bardi, that was useless as a source of paper.

In the modern world we could convert this reed into paper by the pulping process, but in ancient times this was a nonstarter.  At maturity, the grass reed of the Sumerians was too stiff to be worked into a great number of handicrafts or to be made into paper or rope.  So the people of Egypt were lucky in that they had a natural resource, the papyrus sedge, a flexible reed of infinite possibilities, while the Mesopotamians had to make do with a clumsy substitutefor paper.

Both wetland resources eventually disappeared: papyrus vanished from the Delta before the Crusades while the grass reed marshes were recentlydrained by Saddam Hussein. Though neither region suffers today from a shortage of paper (they import what is needed) the loss of wetlands that acted as natural filters has resulted in a serious decrease in water quality in both places.

Ecology is also important in explaining the history of  climate change. In my book, I discuss changes in the aquatic fauna and flora in ancient times that reflect what is happening in today’s global climate change. During the Holocene wet phase in Northern Africa, a period sometimes referred to as the “Aqualithic,” wetlands, papyrus swamps and large lakes flourished.  It was after this that papyrus paper appeared. Eventually, the wet phrase ended and wasfollowed by the drying that resulted in the present north African desert. The whole process reflects the changes affecting the large modern day papyrus swamps that are threatened along the Nile river basin in South Sudan.

Egypt was the only one among the many early hydraulic civilizations blessed by the papyrus plant.  This is another fact that seems to have escaped modern historians, and there is precious little in the general or scientific literature to indicate how or why this plant, almost from the beginning of recorded history, was revered and treasured by common folk and the pharaohs. The Pharaoh’s Treasure provides some answers and indicates some recorded and projected changes in ecology that can help historians improve and sharpen their conclusions in this area.  It can also help substantiate historical changes that might otherwise go unnoticed.