The Myth of the Liberal Professoriate 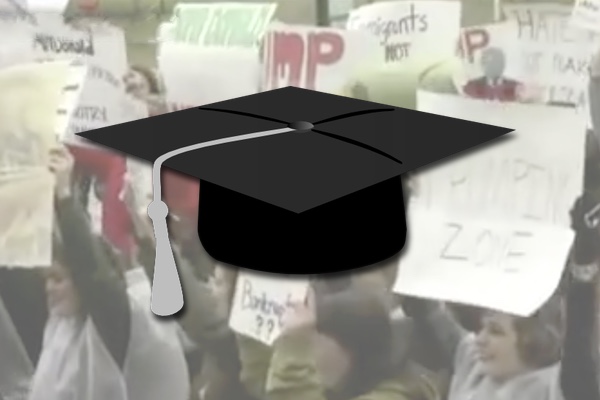 For years conservative broadcasters and the right-leaning print media have denounced liberal control of American higher education. This assertion is based on the large number of academic instructors who belong to the Democratic Party and on actions taken at some colleges to promote a sense of inclusiveness and toleration to the point which – some say – discourages free speech. Both of these latter observations about academe are to a limited extent true, but they indicate that college faculty and administrators are conservative, not liberal, at least in the philosophical sense. And for intellectuals, liberal and conservative social and political values have traditionally rested on philosophical views of human nature.

Liberal programs initially emerged from the belief that human beings are inherently good or are attracted to the good. Seventeenth century religious liberals like the Quakers used the term Inner Light, or the presence of the Creator in all humans, to explain this, while later liberal theorists like Henry David Thoreau used the term conscience. On the other hand, early classical conservatives rooted their policies in the idea that people are by nature either evil or selfish. Religious conservatives like the Puritans believed that Original Sin left all with a powerful inclination to evil, whereas secularly oriented conservatives like Adam Smith, the father of capitalism, asserted that innate “self-love” drives human action.

Although we often lose sight of the philosophical origins of liberal and conservative policy, today’s public agendas reflect those roots. Conservatives have traditionally supported powerful militaries believing that strong nations selfishly prey on weak ones, while liberals downplayed the need for military spending and substituted investment in education and social programs in order to help individuals maximize their latent moral and intellectual capabilities. Similarly, conservatives advocated criminal justice systems characterized by strict laws and harsh punishment to control people’s evil or selfish impulses, while liberals favored systems that focus on rehabilitation to revitalize latent moral sensibilities. Conservatives traditionally opposed welfare spending believing its beneficiaries will live off the labor of society’s productive members, while liberals believed such investments help those who, often through no fault of their own, find themselves lacking the skills and knowledge needed to succeed. Though the philosophical roots of these policies are frequently forgotten today, these agendas continue to be embraced by liberals and conservatives.

College professors are philosophical conservatives. This is a product of their daily experiences, and it shapes their professional behaviors. First, the realm of experience: senior members of the profession are intimately familiar with the old excuse for failure to complete an assignment, “my dog ate my essay,” and its modern replacement, “my computer ate my essay.” Years ago, missed exams were blamed on faulty alarm clocks; today that responsibility has been shifted to dying iPhone batteries. Term papers cut and pasted from Wikipedia are an innovation; plagiarism is not. A philosophically liberal view of humanity is difficult to sustain amidst such behaviors.

The clearest manifestation of philosophical conservatism in the teaching profession is seen in tests and grades. Testing is based in part on the assumption that individuals will not work unless confronted by the negative consequences of failure, an outlook that is steeped in philosophical conservatism. (Among historians, who spend inordinate amounts of time examining wars and economic depressions, which often resulted from greed and avarice, their academic discipline itself encourages a philosophically conservative outlook.)

How then can academicians be accused of being liberal? As noted, this is partly because the majority of faculty are registered Democrats. Counterintuitively, this reflects a philosophically conservative and not a liberal outlook, especially relating to all important economic policy. During the debate over the tax bill last year, Republicans continued their traditional support for supply-side or trickledown economics by proposing to lower taxes on high earners and corporations, whereas Democrats continued to advocate demand-side economics by proposing to shift the tax burden from the large middle to the small upper class and to provide tax-credits for workers. Supply-side economics is based on the assumption that reducing the tax burden on the rich will lead them to invest in plant and equipment which will create jobs, the advantages of which will trickle down to workers in the form of wages and benefits.

This is a philosophically liberal notion. It assumes that people and corporations will invest in plant and equipment even when wages are stagnant leaving many people without the income needed to purchase the goods new factories will produce. Demand-side economics, on the other hand, is partially based on the philosophically conservative notion that no rich person or corporation will build a plant, if the masses lack the income needed to buy the product. In support of this position today, demand-siders note that many corporations are using most of the surplus capital from last year’s tax cuts to buy back stock instead of investing in capital assets because wealth and income are more concentrated in the hands of the few than in recent history, which minimizes the purchasing power of the many. In supporting tax schemes and other economic policies that put money in the pockets of the many, demand-siders embrace the conservative idea that such programs will stimulate selfishly based investment spending by corporations in an attempt to tap the rising wealth of the majority of consumers. Moreover, demand-side policies will unleash the selfishly oriented entrepreneurial inclinations of working people by giving them the wherewithal to open small businesses that spur economic growth.

College professors and administrators are also attracted to Democratic economic policy because they are aware of the successes of demand-side economics. There has not been a major depression since the New Deal, though there have certainly been recessions. This is because that movement largely achieved its goal of shifting the weight of the government from supporting a supply-side to a demand-side approach to economics by institutionalizing minimum wages, overtime pay for work beyond forty hours a week, unemployment insurance, Social Security, and strong labor unions. This was not part of some left-wing socialist agenda. The goal was to put money into the hands of the many and thus incentivize the capital class to invest in new productive capacity, and more importantly to maintain demand and spending when the economy slows.

Academicians generally, and historians especially, realize that prior to the New Deal depressions (aka panics), occurred every ten to twenty years and were exacerbated by wage cuts which reduced demand and led to further layoffs and wage reductions. Minimum wages and union contracts which guarantee a wage for the life of the contract have slowed the downward economic spiral that turned recessions into depressions by limiting wage cuts, while Social Security and unemployment insurance also slowed economic downturns by helping sustain demand as the economy slackened. Though the contemporary right often argues that New Deal programs sought to create a liberal safety net for the poor, academics realize those programs were less attempts to help individuals directly and more attempts to jump-start a stalled economy and to keep it humming in part by incentivizing the capital class to continue to invest in productive capacity.

Conservatives also label academics as liberals because of their attempts to encourage inclusiveness and discourage what some term hateful speech on campuses. To the extent that this is true, and it often seems exaggerated, it is rooted in philosophical conservatism. Academics realize that language has great symbolic power, and symbols have a tendency to generate emotional as opposed to rational responses which colleges and universities rightly scorn. Academics also recognize that negative symbolism, including language, has served to dehumanize groups, and dehumanization has often led to discrimination and persecution. Only philosophical conservatives can have so little faith in human reason and goodness as to believe that emotionally laden language has the power to perpetuate injustice.

Ironically, the right, in supporting both supply-side economics and in tacitly accepting ethnically insensitive and sexist language, is embracing policies rooted in liberal not conservative thought, while the university – in favoring the opposite – adheres to a philosophically conservative outlook. Indeed, a traditional conservative would argue that the appeal of supply side-economics and insensitive speech lie in their ability to protect the wealth of the rich and to sustain the increasingly fragile sense of dignity of the middle class.