What this graph shows about women's suffrage 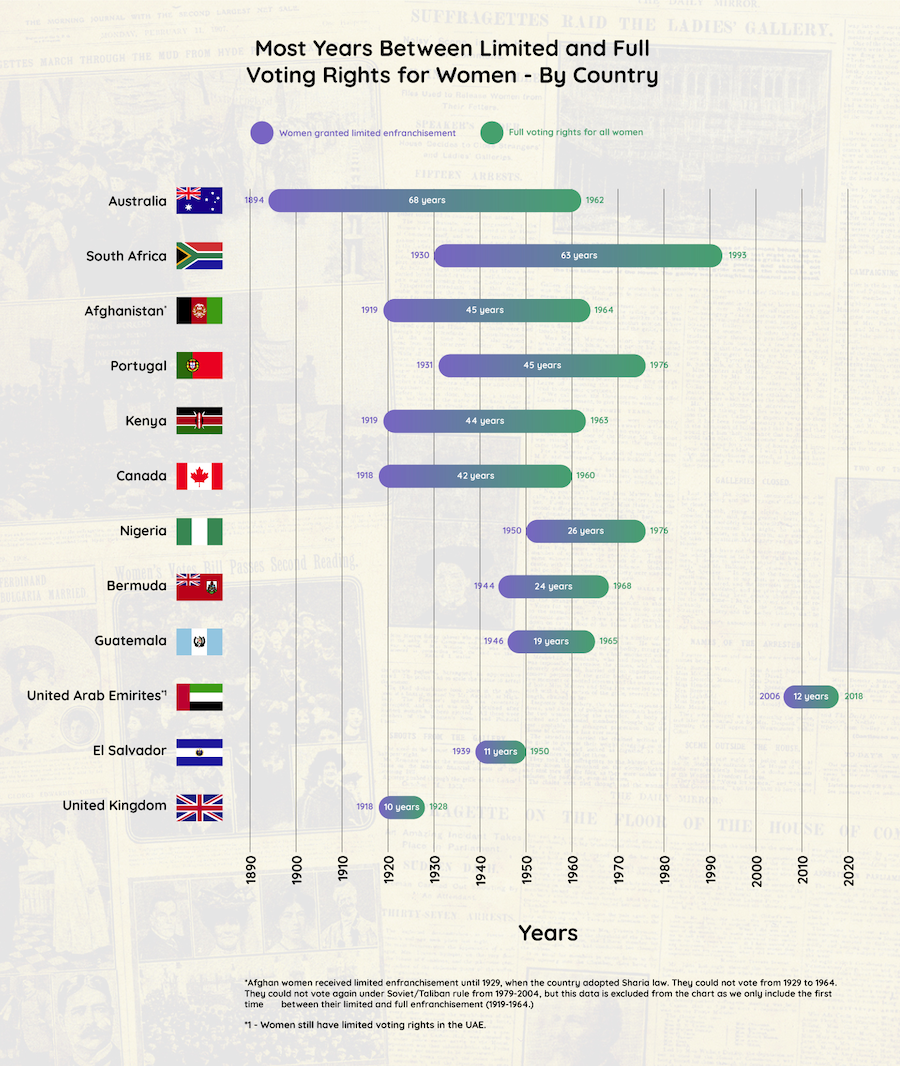 Towards the end of the 19th century women around the world began the long and arduous struggle for women’s suffrage. Women formed organizations that advocated for equal rights for women, and appealed through peaceful and violent protests to get the vote. Women dedicated their lives to the cause, often sacrificing their wellbeing, careers, and even their lives.

The fight for women’s suffrage was by no means a linear process, and many factors other than gender further complicated the notion of equal suffrage. To celebrate 100 years of women’s suffrage in Britain, Historic Newspapers have created an interactive timeline of women’s suffragewhich depicts when women in each country became fully enfranchised. The accompanying data reveals the countries where the longest periods of time elapsed between states awarding limited and full enfranchisement to women. The data depict fascinating insights into the history of women’s suffrage, and reflect the fight that women would continue to face throughout the century. The data show that after all their efforts, women would not be thought of as inherently equal to men for a long time, as well as the difficulties women around the world still face day to day. Initial campaigns for women’s rights were extremely eurocentric, and a woman’s right to vote was also determined by outside factors such as her marital status, educational level and financial situation.

December 14th 2018 marks 100 years since women first cast their vote in a U.K. general election. Although this was a step in the right direction, it by no means meant that women were equal to men. Under new legislation, sure - women could vote, but only those above the age of 30, who also met particular property regulations or had graduated from university. Since most universities didn’t yet admit women, and women’s incomes were significantly lower than men’s, these were pretty difficult circumstances to fulfill. It would be another 10 years before women would be able to vote regardless of their financial or educational circumstances. British women became fully enfranchised in 1928 under the Representation of the People Act.

According to this data, Australia is the country with the largest time disparity between limited and full enfranchisement. After their neighbor, New Zealand, became the first country in the world to introduce women’s suffrage in 1893 - Australia was quick to follow suit. On 18 December 1894, the South Australian Parliament passed the Constitutional Amendment Act, which granted women in the colony the right to vote and stand for parliament. South Australia became the first electorate in the world to give equal political rights to both men and women. Other states in Australia would follow their example, and all European women could vote in 1902. However, Aboriginal people would not be able to vote for another 68 years. It wasn’t until 1962 that Aboriginal women (and men), would be allowed to participate in general elections, finally achieving equal suffrage rights. The civil rights movement in the the United States and South Africa strongly influenced the Australian government’s decision to amend the Commonwealth Electoral Act and give indigenous people the right to vote.

South Africa had a similar situation to Australia. In 1930, women of European descent were extended the right to vote alongside men. However, the country was under Apartheid, an institutionalized system of racial segregation, which meant that African people were denied the right to vote until this system fell, over 60 years later. Parallels can be drawn with Canada’s suffrage history. White women were allowed to vote in 1918, but Canada’s indigenous population weren’t awarded equal rights until 1960, 42 years later. These disparities reflect the racialized dichotomies that governed society during the early 20th century.

Somewhat paradoxically, education was often a deciding factor in whether or not a woman could vote (higher education was a man’s realm, and often denied to women). For example, in Portugal women could only vote if they had completed a secondary education, whereas men were only required to be able to read and write. It wasn’t until after the Portuguese revolution of 1974 that women were given full equal rights to men. In 1946 Guatemala allowed literate women to vote, all women would not be able to vote until 1965, 18 years later. The same restriction was placed upon women’s suffrage in El Salvador. This was a consistent pattern around the world, where the road to equal rights was laborious and elongated, and tested the stamina of the women who continued to fight for their rights.

It is important to note, as well, that despite being able to participate in national elections, women have always and still are grossly underrepresented in governments around the world. Despite constituting half of the world’s population, women make up well under 50% of parliaments and positions of power around the world. In 2018, women hold 26% of the seats in the House of Commons in Britain.

The eurocentric approach to women’s suffrage is often overlooked during centennial celebrations, and it is important to remember that although progress was made by the efforts of women and men throughout the world, suffrage was by no means extended to every woman as a result. Women’s suffrage is never simply a question of gender. Of course it is important to celebrate women’s achievements in the struggle for suffrage, and the extent to which they went to achieve this. It is also necessary to remember those who were denied this right for a much longer time on the basis of their race, education or financial status. Suffrage was granted not on the basis of being a human right, but in relation to privilege.