The Firing of Marc Lamont Hill Raises This Question 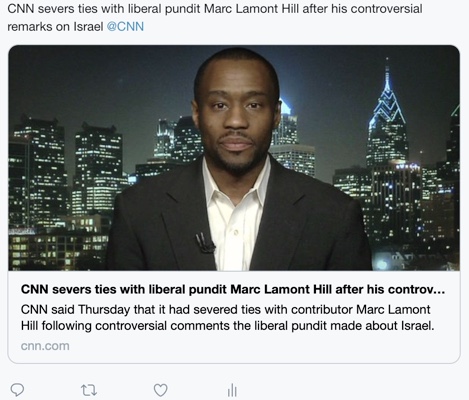 When noted black intellectual Marc Lamont Hill spoke at the UN last month about justice for the Palestinian people, critics like those in the Anti-Defamation League (ADL) were quick to condemn him. They said his words implied support for the “one state solution” to the Israeli-Palestinian conflict, which his detractors claimed was an anti-Semitic and even genocidal notion. Just one day after Hill made his comments, CNN responded to the furor by firing Hill from his post as a commentator on the network. Soon thereafter both the president and chair of the board of trustees of Temple University, where Hill teaches, denounced him and his “hate speech.” Civil libertarians were quick to defend Hill and his right to free speech, and supporters of the Palestinians groused about yet another public figure silenced for evidencing sympathy with the Palestinians. 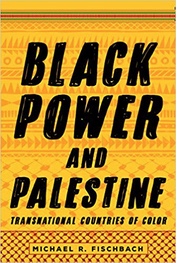 Yet some of the most insightful criticisms of the way Hill was treated pointed out the controversy’s racial context: Hill’s was just the most recent case in a long history of blacks being publicly excoriated for “daring” to speak out on the great issues of the day in ways that defy white conventions. This was particularly true when discussing the Arab-Israeli conflict in a manner that challenges the carefully circumscribed discourse enforced by strongly pro-Israeli groups like the ADL.

This has happened before. Indeed, next year, 2019, marks the fortieth anniversary of a similar brouhaha that erupted when another black man very much in the public eye dared to challenge the rigidly pro-Israeli understanding of Americans’ approach to the Middle East: the Andrew Young Affair.

In August 1979, President Jimmy Carter forced the American ambassador to the UN, Andrew Young, to resign following revelations that Young had secretly met once with an official from the Palestine Liberation Organization (PLO) in violation of an American pledge to Israel not to deal with the PLO in any way. Young, the highest-ranking black official in the Carter administration, had met the official to advance American policy aims but nonetheless was fired after facing a barrage of hostile public criticism, notably by American Jewish organizations.

When it was soon revealed that the American ambassador to Austria, a Jewish industrialist from Cleveland named Milton Wolf, also had met several times with PLO officials earlier that year but without similar repercussions, African-Americans exploded in fury and rallied behind Young. Why the double standard, they demanded to know? Some, like the Southern Christian Leadership Conference’s Joseph Lowery and Operation PUSH’s Jesse Jackson, quickly announced they would continue Young’s efforts by themselves talking to the PLO. They then separately traveled to Lebanon, met PLO Chair Yasir Arafat, and presented him with their ideas for resolving the Israeli-Palestinian conflict. Lowery and Jackson insisted that black Americans had a legitimate role to play in the formulation of American foreign policy discussions and decisions, just like any other ethnic or religious group in the country. They were not going to be muzzled by a refusal to meet with any particular side in the conflict.

What happened to both Marc Lamont Hill and Andrew Young speaks volumes about race, foreign policy, and American positions on the Middle East. Both instances hearken back to long-held black complaints that their leadership voices are not welcome, whether in fields of life long dominated by well-educated whites or even in their own Civil Rights organizations. One of the key demands of the Black Power movement in the 1960s in fact was that African-Americans must take charge of their own destinies, their own groups, and formulate their own strategies and tactics for liberation. This was exemplified when the Student Nonviolent Coordinating Committee (SNCC) asked white members to leave the group in 1966, leaving blacks to lead SNCC and whites to go out and organize their own community. Other black forces in the 1960s and 1970s similarly demanded political and cultural autonomy.

Another way that this black autonomy was expressed during that heady period of time was by asserting blacks’ right to speak out on the great foreign policy issues of the day regardless of whether or not the white establishment approved. Martin Luther King, Jr. accordingly defied his critics by denouncing the Vietnam War in 1967.

No topic proved more controversial in this regard than the Arab-Israeli conflict. Black Power advocates hailed the various Third World liberation movements underway in the 1960s, and accordingly saw themselves and the Palestinians as kindred peoples of color each fighting against a racialized system of imperialism and domination. Malcolm X visited East Jerusalem in 1959 and Gaza in 1964, and publicly denounced Israel and Zionism. SNCC issued a newsletter article that spoke out forcefully in support of the Palestinian struggle against Israel shortly after the 1967 Arab-Israeli War. A few weeks later black militants at the National Conference for New Politics in Chicago arranged for the gathering to issue a statement against Israel.

Thereafter the floodgates of black pro-Palestinianism opened. Stemming first and foremost from their Black Power internationalism, the increasingly vocal stances in favor of the Palestinians emerging from activists in the Black Panther Party, the Black Arts Movement, even individuals like the boxer Muhammad Ali, also emanated from blacks’ insistence that their voices mattered. They no longer would sit in the back of the foreign policy bus lest they upset their white benefactors and political allies who urged them to stick to speaking about race relations only.

In the 1970s these attitudes began moving from Black Power radicals into the African-American mainstream. The Congressional Black Caucus and politicians associated with it like Shirley Chisholm and Walter Fauntroy, for example, spoke sympathetically about the Palestinian experience. The National Black Political Assembly in Gary, Indiana issued a statement critical of Israel. In the wake of the Andrew Young Affair, religious groups like the Black Theology Project and the National Black Pastors’ Conference affirmed Palestinian rights, as did secular organizations like TransAfrica. They once again were affirming both the need for a just and peaceful resolution of the Israeli-Palestinian conflict that included talking to the PLO as well as the right of black Americans to speak publicly about the Middle East, even if such speech angered pro-Israeli forces.

African-Americans well know the dangers of publicly speaking their minds. Yet many also have felt for decades that the Palestinians, like themselves, are a people of color seeking to be free who deserve black Americans’ public support. This is why blacks from Ferguson, Missouri and West Bank Palestinians visited one another in 2014 and 2015, and tweeted back and forth about how to deal with the guns and tear gas used against them by security forces in their respective homelands. This is why rappers like Method Man, Jasiri X, Boots Riley, Mos Def, and Talib Kweli perform songs about the Palestinians. This is why the 2015 Black Solidarity Statement with Palestine garnered over 1,100 signatures, including those of groups like the Dream Defenders and Hands Up United, and individuals like Angela Davis and Cornel West. People may be trying to silence Marc Lamont Hill, but the long history of black support for the Palestinians suggests that voices like his will continue to be raised.