The GOP Wasn’t Always the Party of Right-wingers 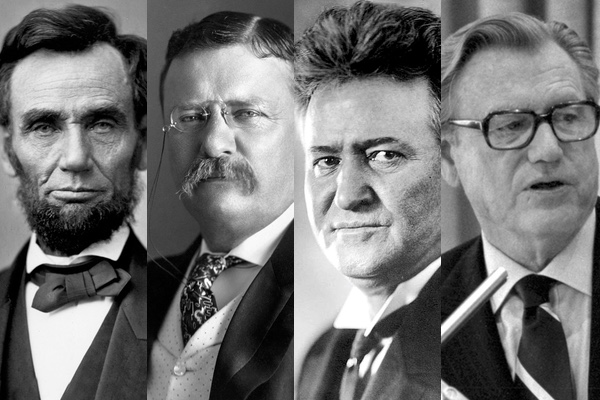 The Republican Party has been in existence now for 164 years. It was founded in 1854 in opposition to the expansion of slavery, as permitted under the Kansas Nebraska Act of that year, which also drew the opposition of abolitionists, as well as “Free Soilers.” What started as a reform oriented party with a real commitment to principle and remained so for about a generation until the mid 1870s, became a party openly connected to the massive growth of monopoly capitalism. By then, beholden to the status quo, it had lost interest in the issue of racial equality and racial justice.

For twenty years the Republican Party had inspiring leadership. It wasn’t just Abraham Lincoln. Republicans in Congress brought about the 14th and 15th Amendments, the Civil Rights Acts of 1866 and 1875, and the Ku Klux Klan Act in the years of Reconstruction. GOP President Ulysses S. Grant fully embraced the fight for equality.

Among those Radical Republicans who stand out in history are the following US Senators: Charles Sumner; Salmon Chase (later Secretary of the Treasury under Lincoln and Chief Justice of the Supreme Court), Benjamin Wade (later President Pro Tempore of the Senate at the time of the Andrew Johnson impeachment trial), Henry Wilson (who was the second Vice President under Grant); Hannibal Hamlin (Lincoln’s first Vice President); John P. Hale; Oliver P. Morton; and Jacob Howard.

In the House of Representatives, we had such luminaries as Thaddeus Stevens, John A. Bingham, James A. Garfield (later the 20th President of the United States); Schuyler Colfax (later Speaker of the House and first Vice President under Grant); Henry Winter Davis; Elihu Washburne, John A. Logan, Benjamin Butler, and James F. Wilson.

After a twenty-five year period of conservative dominance of the Republican Party, as the 20th century began, the party experienced the rise of a “Progressive” wing which had a major influence in the first generation of the century, generally labeled “the Progressive Era.” Theodore Roosevelt initiated the national commitment to progressivism. He backed the regulation of corporations, environmentalism, labor rights, and social justice. GOP members of Congress and some state governors also championed progressive ideas.

Among the major figures who promoted progressivism were Senator Robert LaFollette, Sr. of Wisconsin (who had been the first major state governor to advocate reform and change); Senator Hiram Johnson of California (who had promoted progressivism as the state’s governor); Charles Evans Hughes of New York (who had been a reform governor in the Empire State earlier and ran for President in 1916 against Woodrow Wilson); Senator William Borah of Idaho; Senator George Norris of Nebraska; and New York Congressman Fiorello LaGuardia.

After 1920, progressivism declined in the Republican Party in the era of Warren G. Harding, Calvin Coolidge, and Herbert Hoover, but Johnson, Borah and Norris remained progressive leaders in the Senate. They were joined by Robert LaFollette, Jr., James Couzens, Bronson Cutting, Charles McNary, Gerald Nye and Lynn Frazier. But growing isolationism in the era of Fascism and opposition to internationalism caused their decline by the time of the formation of the American First Committee in 1940-1941, and America’s entrance into World War II.

Reform commitments however still existed in the hearts and minds of many, and so emergence of a primarily Eastern “Liberal” Republican wing of the party began in the battle over the Republican Presidential nomination in 1952 between General Dwight D. Eisenhower and conservative icon Senator Robert Taft of Ohio, son of former President William Howard Taft. As Eisenhower was about to leave office, Rockefeller Republicans became a strong force in the party.

New York Governor Nelson Rockefeller became the acknowledged leader of liberals in the GOP in three bids to win the party’s presidential nomination in 1960, 1964 and 1968. But others who were part of this group included Governors George Romney and William Scranton and Senators Jacob Javits, Clifford Case, Charles Mathias, Lowell Weicker, Charles Percy, and Mark Hatfield. All of these Republicans favored New Deal programs, including business regulation and social welfare, as well as civil rights, infrastructure improvements and investments in education. Internationalists, they supported foreign aid and close ties to the North Atlantic Treaty Organization to combat communism.

But since the age of Ronald Reagan, the concept of “radical,” “progressive” or “liberal” Republicans is basically a part of the past. The party today has been captured by the most extreme elements, particularly since President Donald Trump’s election. The question is whether reform oriented Republicans will ever arise again.