Douglas Boin is a historian at Saint Louis University. His most recent book is A Social and Cultural History of Late Antiquity(Wiley).

They were removed from their parents, held in a strange location. Nothing connected them to their families. They grew up, learned new languages, and became adults, some perhaps reluctantly. Years later, the government that had taken them from their relatives eventually announced a program that would offer them a future. It turned out to be a sham. 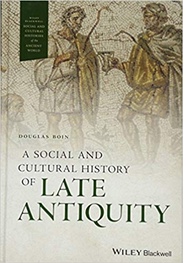 The children were lured into public; soldiers were ordered to be standing by. Every child was murdered. No one spoke about the massacre for decades. About a generation later, the state behind the program would face a truly dire threat. Men from across the border were thought to be plotting an attack on a major city. On August 24—the city Rome, the year 410—they struck. No one ever connected the dots; the attackers had been children once, too.

What a culture chooses to remember and what it forgets says a lot about who its people are. Since the U.S. border separation policy went into effect this March, public outrage has been loud and justly so. Millions of Americans, a people whose society has a checkered past of grouping Muslims, Asians, Native Americans, Mexicans, and other minority groups into undifferentiated masses, suddenly learned how to say “Not in My Name.” Some didn’t think it was possible to scream a little louder at the injustices; thank God, they have.

The Trump administration’s decision to take immigrant kids from their parents will never be forgotten. We have writers and activists and journalists and a few morally-clear politicians to thank for that. They’ve left a record of having seen a wound that was ugly and is still healing. But in history, it hasn’t always worked that way. Similarly inhumane events have been lost for decades, sometimes almost entirely erased.

Nuance and empathy aren’t instinctive tools for approaching the people of the Roman Empire. “Empires,” as President Ronald Reagan reminded Americans, have always been “evil" things. Hollywood hasn’t helped correct that picture nor has the legacy of the Founding Fathers nor has the Bible. Kings and emperors have been vilified ever since our country’s founding; Washington, Jefferson, and Franklin lionized the simple men of Rome's Republic. And the texts in the Christian Bible paint Rome in the broadest brush as a morally degenerate place:“Babylon.”

Yet Christian America too quickly forgets that there were Christian Caesars. These men faced challenges like Rome never had before: governing citizens across three continents, waging wars on two, sometimes three or four, frontiers. And they did their best to serve a populace that by and large trusted them to govern. It was one of Rome’s Christian rulers, in fact, who implemented a plan to separate border children from their parents. His government had done so in the late 370s. Goths, tribes from Rome’s northern frontier, were trying to enter Roman lands. Many of the Gothic people were fleeing civil war and foreign threats. Emperor Valens agreed to receive them, families and all, but the children, he said, should be taken from their parents, away from the border, and “brought up in a different country.”

There is no evidence these families were ever reunited. Forty years later, it was a Goth, Alaric, probably not even a teenager at the time Valens's policy went into effect, who had organized the stunning attack, in 410. There is no need for us to feign a nostalgic love for a “civilized” European past, untouched by “barbarians," to appreciate how deeply the people at the time were shaken by Alaric's actions; some Christians thought it was the end of the world. Little surprise then, that, for more than a hundred years, no Roman ever asked his readers to consider what their empire had done to the immigrant children, decades earlier. The Roman people—decent human beings, innocent but perhaps powerless—simply went on with their lives.

We know what happened because a writer took upon himself the painful task of asking citizens to confront this difficult episode. His name was Count Zosimus. Historians like to dismiss the count’s writing. The timing of Zosimus’s book, A New History, was written generations after the 370s and makes all the details of his reporting seem suspect. But that’s not the way memory always works in individuals. And it’s not the way memory works in a society. Raw emotions take time to heal. And sometimes the experiences of the present tear open old sutures.

Squeamishness alone can keep many from looking at what happened—for years, if not decades. And indeed, turning one’s eyes away from the past has been a natural reaction in radical times. Many societies have tried some version of it: France after the Revolution; the Communists in their takeover of Czechoslovakia, in the mid twentieth century. “Organized oblivion,” in the words of historian Paul Connerton, has been one of history’s most dangerous drugs precisely because its potential harm is truly far-reaching for a society: “there might remain nobody who could ever again properly bear witness to the past.”

You don’t have to live in an authoritarian age to see the warning. History is not about judging past people's mistakes but judging how far we've come—or suffering the embarrassment of having gone nowhere at all. On that point, perhaps even Count Zosimus deserves more credit than we usually give him. He knew that injustices call out for writers and historians, the same way they still call out for activists. And on this, too, he was right. Our stories are our future.