Why Jefferson Advised Against the Study of Morality 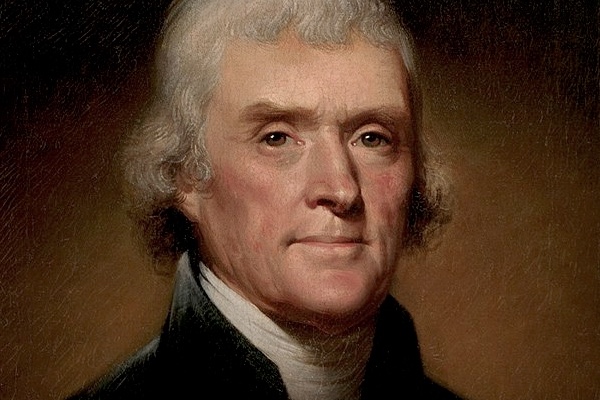 Thomas Jefferson was one of the most erudite men of his time. His passion for learning, perhaps obsessive, was matchless and what he learned he learned chiefly through books. Why? First, when at Monticello, he was far from the sort of society of cultured persons that he could readily find, for instance, in the salons of Paris. Thus, he had no choice but to turn to books. Second, though he traveled in social settings while engaged for four decades in legal and political affairs, Jefferson was much more comfortable in the quiet of solitude, where he could conduct uninterruptedly personal affairs and engage in serious study. That quiet milieu was difficult to find in retirement at Monticello. Hence, he would frequently remove to Poplar Forest with grandchildren—usually thrice each year from 1810 to his last visit in 1823—and when the business of the day was over, he would sit in his Campeche chair near a fireplace at Poplar Forest and read.

Jefferson’s matchless passion for learning was not without discretion. He expressed on numerous occasions his preference for useful knowledge. His views on education were centered on useful learning. “All the branches … of useful science,” he writes to nephew Peter Carr (7 Spt. 1814), are to be taught in the general schools. In establishing a curriculum for his University of Virginia, he was firm in advocacy, he tells Charles Yancey (9 Jan. 1816), that “every branch of science useful in our time and country” would be offered. Religion was not one of those sciences; morality was.

Jefferson was clear in several writings and in keeping with other moral-sense theorists, e.g., Lord Kames and Thomas Reid, or moral sentimentalists, e.g., Adam Smith and David Hume, that our sense of morality was much more important than our faculty of reason. As he says to Peter Carr (19 Aug. 1785), “An honest heart being the first blessing, a knowing head is the second.”While a sound rational faculty was given to too few, the moral sense, like seeing, was in possession by almost all. Thus, Jefferson spent an inordinate amount of his free time reading moral works. Almost all of his free time with books was engagement with books of moral content and he found moral inspiration in numerous sources: the poetry of William Shakespeare, the sermons of Rev. Louis Bourdaloue, the Letters of Seneca, Tacitus’ Histories, the New Testament, and the novels of Laurence Sterne. Of the most significant aims of higher education, there were the cultivation of morals and instillation of the “precepts of virtue and order.” Given the superiority of the moral sense to the faculty of reason, it is unsurprising that in advisory letters to Peter Carr (19 Aug. 1785 and 10 Aug. 1787), his daughters Martha (21 May 1787) and Maria (30 May 1791), and grandson Thomas Jefferson Randolph (24 Nov. 1808)—the last is singular in its lengthy spotlight on virtue—the focus is goodness of character or virtue.

Jefferson’s view of the moral sense is customarily sloughed off or ignored by scholars. That is not unreasonable, as engagement with the topic would push scholars with more interest in Jefferson’s political thinking to study of the moral-sense and moral-sentiment literature, and that is no small task. It is also because, I suspect, that today few scholars take seriously any discussion of morality. Joseph Ellis in American Sphinx says that how Jefferson came to his view of the moral sense is “not terribly important.” Peter Onuf, in The Mind of Thomas Jefferson, elaborates a bit on Lord Kames’s views, but other than some discussion of moral progress, does not come clean on how Kames’s moral sense influenced Jefferson’s. His intention is inculpation of Jefferson for inconsistency concerning his published thoughts and actions on slavery.

Those who do write on the moral sense often do more to confuse than to clarify. In “Thomas Jefferson and Natural Morality,” Mike Zuckert, who promises to clear up deficiencies in the work of Jean Yarbrough, who is one of the few scholars to write intelligently about Jefferson’s moral sense, offers an account that is singularly defective. He argues that Jefferson’s moral sense is not sensory but instinctual. Moreover, that moral instinct is neither necessary nor sufficient for right action. Charles Sanford in The Religious Life of Thomas Jefferson says that inconsistencies in Jefferson’s thoughts on the moral sense are due to his lack of interest in “building a comprehensive system of philosophy.” For Jefferson, moral law is “perceived by man’s reason,” while the moral sense is a faculty by which people “desire to obey it.”

What is overpassed is one oddment—a paradox or perhaps even an inconsistency—that Jefferson disadvises intimates to attend lectures in morality but consistently champions moral instruction in formal education. Jefferson advises in both his Bill for the More General Diffusion of Knowledge (1779) that there be a “professor of moral philosophy” and in a similar educational bill decades later (1817) a professor of “Ethics.” InNotes on the State of Virginia, he writes of the significancy of morality in elementary education. “The first elements of morality” can be instilled in general education. In his 1818 Rockfish Gap Report, he states that in elementary education, one will “improve, by reading his morals,” and that higher education will “cultivate their morals, and instill into them the precepts of virtue and order.” He sums, “Education generates habits of application, of order, and the love of virtue; and controls, by the force of habit, any innate obliquities in our moral organization.”

Yet in 1787, he oddly offers Peter Carr the following advice. “I think it lost time to attend lectures in this branch [morality]” (Aug. 10). That is consistent with a similar message that he gives to future son-in-law, Thomas Mann Randolph, to eschew study of history (27 Aug. 1786), chiefly of value for its moral content, as that “would be a waste of time.”

Is there any way to reconcile the advice to Carr and Randolph with the numerous passages on the criticality of moral instruction throughout elementary and higher education?

Jefferson thought moral instruction of some sort was necessary throughout one’s life. That is why he told his personal physician, Dr. Vine Utley, on March 21, 1819, “I never go to bed without an hour, or half hour’s previous reading of something moral whereon to ruminate in the intervals of sleep.” Yet such instruction was not, paceSanford, something graspable by reason, and not, pace Zuckert, an instinct. It was instead sensed through a sensory faculty which Jefferson very probably thought was the heart. “[Man] was endowed with a sense of right & wrong merely relative to this [society].” Because the right course of action is sensed, moral “understanding” is involuntary, immediate (or relatively so), and not reason-aided. And so, lectures on morality would be as useful as lectures on seeing or hearing.

For Jefferson, we “know” the right thing to do. It is merely a matter of doing it. That is where moral instruction comes into play. It inspires one to act. And so, like a limb, the moral sense improves with the right amount of exercise. “They will gain strength by exercise,” he tells Carr in the 1785 letter, “as a limb of the body does, and that exercise will make them habitual.” Consistent with Aristotle’s view of right moral action in his Nicomachean Ethics(II.4), one does not become a moral person by infrequent moral acts.

Like other sensory faculties, the moral sense too is capable of sensory refinement. Here education of some sort is aidful. The ale-imbibing tyro and the ale-imbibing aficionado taste the same things when they sip an Old Rasputin Russian Imperial Stout, but only the latter singles out the earthy, roasted barley flavor, the intense hop bite, and dry, though slightly oily, mouth-feel. Yet the moral refinement of the sort suggested by the comparison with taste is the sort of refinement that need not occur through attending lectures. It might, however, occur in the early stages of moral instruction.

There is another sort of moral instruction, best exemplified by the doctrine, gnothi seauton (know yourself), that appeared on the wall of the Oracle of Delphi. One can readily see that sensing the right thing to do does not always tell one what is the right thing to do, as people vary in their abilities and skills. Jefferson as governor of Virginia was constitutionally empowered to lead the Virginian troops in battle with the invading British army. Yet that was the sort of activity for which someone like Alexander Hamilton, not Jefferson, was qualified. Jefferson was a cerebral and not a military leader—his talents were not of the physical sort. His talents would have been misused in such a role as was the case when Stephen F. Austin clumsily assumed leadership of the Texans in their battle for independence from Mexico. Yet knowing oneself does not occur through moral instruction. What is needed is the sort of daily moral introspection of the sort Jefferson did at the end of each day and throughout his life.

And so, once we tease out fully the implications of the moral sense qua sensory faculty, the oddment disappears.