Is Donald Trump’s Problem that He Can’t Laugh?

Walter G. Moss is a professor emeritus of history at Eastern Michigan University and Contributing Editor of HNN. He is presently working on a book dealing with humor and wisdom from a historical perspective. For a list of all of Moss’s recent books and online publications, click here. 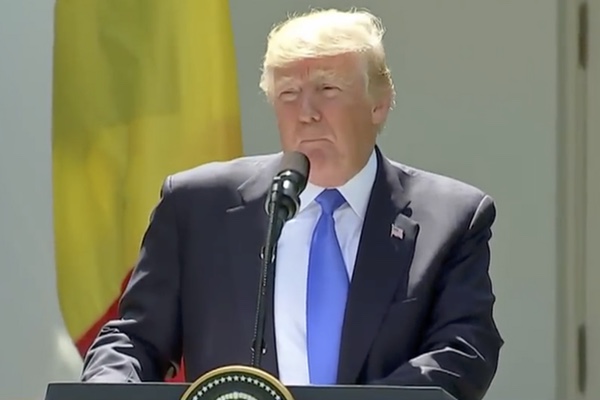 In The War Years Lincoln biographer and poet Carl Sandburg wrote,“Lincoln was the first true humorist to occupy the White House. No other President of the United States had come to be identified, for good or bad, with a relish for the comic.” More recently Richard Carwardine has devoted a whole book toLincoln's humor. In contrast, former FBI director James Comey has stated that he never personally witnessed President Trump laugh, and conservative columnist Max Boot has written, “Has there ever been a president as humorless as Donald Trump? Doubtful.”

Is it just coincidental that our most humor-appreciating president was one of our wisest; and our most humorless one, probably our most foolish? I think not.

America’s outstanding twentieth-century theologian, Reinhold Niebuhr (1892-1971)— a favorite of President Obama as well as Comey, who wrote his senior thesis on him—once stated, “To meet the disappointments and frustrations of life, the irrationalities and contingencies with laughter, is a high form of wisdom.” Psychologist Erik Erikson wrote, “I can’t imagine a wise old person who can’t laugh.” Niebuhr thought that a sense of humor was especially important for politicians: “All men betray moods and affectations, conceits and idiosyncrasies, which could become the source of great annoyance to us if we took them too seriously. It is better to laugh at them. A sense of humor is indispensable to men of affairs who have the duty of organizing their fellowmen in common endeavors. It reduces the frictions of life and makes the foibles of men tolerable.”

Various wisdom scholars have also included a sense of humor as one of the values or virtues of wise people. I included it in an essay on political wisdom written before Trump ran for president. Wisdom also includes: a proper mix of realism and idealism, compassion, empathy, humility, tolerance and a willingness to compromise, creativity, temperance, self-discipline, passion, and courage. In addition, practical wisdom or prudence is necessary in order to properly balance, prioritize, and fit together these virtues and values in any particular situation so as to achieve the greatest good.

Skimming through Lincoln’s collected writings, speeches, and letters, one is struck by how concerned he was with wisdom. In the Kindle 7-volume edition (Madison & Adams Press, 2017), there are 59 mentions of “wisdom” and 85 for “wise.” Just a few examples, of how he valued wisdom should suffice.

In a letter of January 5, 1863 he wrote: “No one is more deeply than myself aware that without His [God’s] favor our highest wisdom is but as foolishness and that our most strenuous efforts would avail nothing in the shadow of his displeasure.” In another letter of September 4, 1864, he states: “We hoped for a happy termination of this terrible war long before this; but God knows best, and has ruled otherwise. We shall yet acknowledge His wisdom, and our own error therein. Meanwhile we must work earnestly in the best light He gives us, trusting that so working still conduces to the great ends He ordains.” In a short piece on “Democratic Government,” on November 10, 1864, we read: “In any future great national trial, compared with the men of this, we will have as weak and as strong, as silly and as wise, as bad and as good. Let us, therefore, study the incidents of this as philosophy to learn wisdom from, and none of them as wrongs to be revenged.”

In an Introduction to Lincoln’s collected works, Theodore Roosevelt quoted these November 1864 words and then added that Lincoln’s life taught Americans that “they must act with wisdom, because otherwise adherence to right will be mere sound and fury without substance; and that they must also act high-mindedly, or else what seems to be wisdom will in the end turn out to be the most destructive kind of folly.”

Lincoln’s concern with wisdom was not just a late development in his life, but was already present in him from a young age. In a long “circular” to the people of Illinois in 1843 (when he was in his thirties), he stated: “That ‘union is strength’ is a truth that has been known, illustrated, and declared in various ways and forms in all ages of the world. That great fabulist and philosopher Aesop illustrated it by his fable of the bundle of sticks; and he [Jesus] whose wisdom surpasses that of all philosophers has declared that ‘a house divided against itself cannot stand.’ ”

The citation from Jesus was taken from the Bible, which Lincoln knew well. Fred Kaplan in his Lincoln: The Biography of a Writer lists the Bible, Aesop’s Fables, and the works of Shakespeare as three of Lincoln’s greatest sources of inspiration. About Aesop’s Fables influence, Kaplan wrote, “Such commonplaces seemed profound wisdom simply expressed. Aesop became an enduring favorite.”

Kaplan also wrote, “That the Bible as wisdom literature contained truths about the human condition and provided moral guidance he did indeed believe.” And “A lifetime of reading wisdom literature thoroughly informs the two Lincoln essays [the Gettysburg and the second inaugural addresses] that have most permeated the American historical consciousness.”

Like all humans, Lincoln was not always wise, but he not only valued wisdom, he also possessed many of the values and virtues of a wise man, including a sense of humor.

In The War Years Sandburg provides many examples of Lincoln’s humor. One apt example indicates how Lincoln used it to keep his mental balance and cope with tragedy:

On the day after [the North’s crushing defeat at] Fredericksburg the staunch old friend, Issac N. Arnold, entered Lincoln's office [and] was asked to sit down. Lincoln then read from [humorist] Artemus Ward. . . . That Lincoln should wish to read this nonsense while the ambulances were yet hauling thousands of wounded from the frozen mud flats of the Rappahannock River was amazing to Congressman Arnold. As he said afterward he was “shocked.”  He inquired, “Mr. President, is it possible that with the whole land bowed in sorrow and covered with a pall in the presence of yesterday's fearful reverse, you can indulge in such levity” Then, Arnold said, the President threw down the Artemus Ward book, tears streamed down his cheeks, his physical frame quivered as he burst forth, “Mr. Arnold, if I could not get momentary respite from the crushing burden I am constantly carrying, my heart would break!' And with that pent-up cry let out, it came over Arnold that the laughter of Lincoln at times was a mask.

Joshua Wolf Shenk writes in Lincoln's Melancholy: How Depression Challenged a President and Fueled His Greatness (2006) that Lincoln used humor to cope with tragedy. “More than any medication, more than any doctor’s counsel, Lincoln drew on two therapies for inspiration and succor: He read poetry, which helped him cut straight into the heart of real life. And he told jokes, which he called ‘the vents of my moods & gloom.’ It’s an apt image, as humor helped keep Lincoln’s inner life in circulation, keeping him in a kind of equilibrium with the environment.”

Another source on Lincoln’s humor observes that he was “known for his humor and folksy anecdotes, he liked to tell all kinds of jokes, bawdy stories, and yarns—usually poking fun at himself. . . . When he was accused of being two-faced [during a Lincoln-Douglas debate], Lincoln responded: ‘If I had another face, do you think I would wear this one?’ ”

The willingness of this man, who many thought homely in appearance, to make fun of his own looks attests to his willingness to combine humor with humility. Niebuhr believed that the best humor reflected this combination:

Humor is a proof of the capacity of the self to gain a vantage point from which it is able to look at itself. The sense of humor is thus a by-product of self-transcendence. People with a sense of humor do not take themselves too seriously. They are able to “stand off” from themselves, see themselves in perspective, and recognize the ludicrous and absurd aspects of their pretensions. All of us ought to be ready to laugh at ourselves because all of us are a little funny in our foibles, conceits and pretensions. What is funny about us is precisely that we take ourselves too seriously. We are rather insignificant little bundles of energy and vitality in a vast organization of life. But we pretend that we are the very center of this organization. This pretension is ludicrous; and its absurdity increases with our lack of awareness of it. The less we are able to laugh at ourselves the more it becomes necessary and inevitable that others laugh at us.

Although much of Lincoln’s humor was self-deprecating, it could also be sarcastic. Sandburg observed as a young Illinois state representative in Springfield, Lincoln “let himself go in sarcasm and satire that was to bring him shame and humiliation. He would change. He was to learn, at cost, how to use the qualities of pity and compassion that lay deeply and naturally in his heart, toward wiser reading and keener understanding of all men and women he met.” As he got older his humor became more “good-humored.”

The poet W. H. Auden, a friend of Niebuhr’s, agreed with the theologian that such humor was superior to the mean-spirited kind. In one of his essays on Shakespeare, he commented that Shakespeare’s comedy was superior to classical comedy because it reflected a Christian sensibility, which tells us that we are “forbidden to judge others and that it is our duty to forgive each other.”

Although Lincoln’s humor matured as he aged, he continued to relish some satire, which can be wise if employed to combat evil and further the common good. One of the president’s favorites was a man who a New York Times blog essay referred to as “The Stephen Colbert of the Civil War.” His name was David R. Locke, but writing as Petroleum Vesuvius Nasby he promoted progressive causes like racial equality by appearing to oppose them. Before going to the theater where he was assassinated, Lincoln read aloud to a few friends a Nasby piece that satirized Confederate’ thinking and the claim that Lincoln was “a buffon, a ape, a gorriler, a smutty joker.”

Although James Comey and Max Boot have indicated that Trump is humorless, we should be more specific and note that Trump can laugh at, and sometimes mock, others—who can forget the video of Trump mocking a reporter with a disability? In theNew Yorker, Emily Nussbaum compared the campaigning Trump to “the insult comic, the stadium act, the ratings-obsessed headliner who shouted down hecklers.” This type of “comedy,” however, is opposed to the type of humor supported by Niebuhr and Auden and is more akin to many ethnic jokes which use humor to make oneself feel superior and put down others.

What Trump cannot do, as Lincoln did, is laugh at himself. His colossal egoism will not allow it. And this same egoism is his chief impediment to gaining any type of wisdom or wisdom values. His outlandish statements —e.g., “I do have actually much more humility than a lot of people would think”; “I’m a very nice person who gets along very well with people”; Everybody loves me”—illustrate Niebuhr’s point that the less we are able to laugh at ourselves, the more others will laugh at us. No wonder he is such fodder for the likes of Stephen Colbert and Alec Baldwin.