People Are Extending Fire Seasons More than Climate Change Is

Stephen J. Pyne is a professor at Arizona State University and the author of Between Two Fires: A Fire History of Contemporary America. 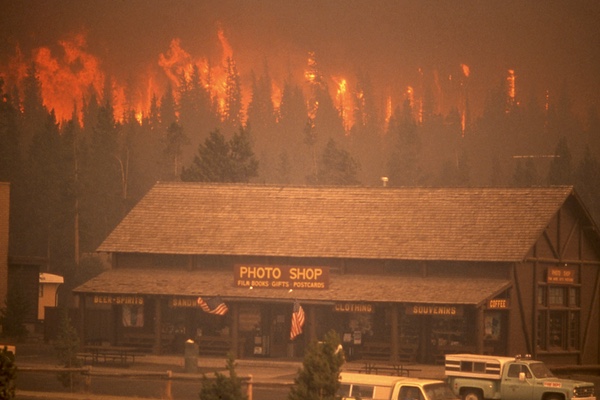 That’s one of the lessons of the fire that ravaged Yellowstone 30 years ago.

The first fire started in May, the first big one in late June, the main rush in July. New ones kept coming, kindled by lightning and humans, and old ones kept growing, and merging, with acres burned doubling on August 20, Black Saturday, and flames washing over the Old Faithful complex on September 7, all unstoppable despite a mighty buildup of firefighters, engines, and air tankers until snows finally extinguished them. The last spurt occurred on October 1. Altogether the fires burned roughly 45% of Yellowstone National Park. 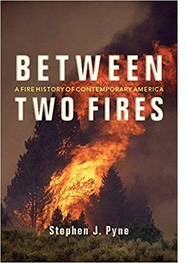 They also sparked a firestorm of media interest. This was a celebrity landscape - America's, and the world's, first national park. With little else happening around the globe, the media camped at Yellowstone while the fires burned day after day, week after week, month after month. Traditionally the news media had not been much interested in wildfires, which were regarded as a freak of western geography. Now wildfire was national, even global news. Yellowstone's summer of flame became the longest running fire serial in American TV history. Fire season entered the annual almanac of media events, a feature to anticipate like hurricanes and floods.

For many people the fires announced a new era of fire policy and a new age of megafires. In fact, policies aimed at restoring fire for ecological benefit (and reduced fuel loads) had been adopted 20 years earlier by the National Park Service and 10 years previously by the U.S. Forest Service. Post-fire reviews reaffirmed that policy. What Yellowstone did was bring those reforms vividly before the public.

Nor had the 1988 eruption marked the beginning of the long cycle of drought and big burns that have continued, with minor pauses, over the past 30 years. The early 1980s were notoriously wet and saw some of the lowest burning in the century. Climatologists were arguing about a coming ice age and nuclear winters, not greenhouse summers. The uptick began in 1985 and 1986 and reached what at the time seemed an extraordinary outbreak with the 1987 fires in northern California - the first of that state's “fire sieges.” In 1988 the focus migrated to Yellowstone and brought the phase change to public attention.

In the end the Yellowstone fires were neither a source for change nor its primary manifestation. The push for prescribed burning came from Florida; experiments in using natural fires emanated from the national parks of the Sierra Nevada. The first wildland-urban interface fire of national interest struck Southern California in 1961; the first to burn into a city hit Oakland in 1991. Wallace Stegner once observed that California was like the rest of the country, only more so. That has proved true for its fires as well.

By mesmerizing media attention, the Yellowstone fires helped educate the public that something in the fire world had changed. They showed that large fires could be necessary, if not inevitable. They aligned nicely with public pronouncements about the consequences of climate change (there were widespread fires in Amazonia at the same time). They demonstrated that massive counterforce could not suppress big fires once they were blowing and going. They also distracted, as celebrity coverage can, from the fundamentals.

What then prodded that phase change in the mid-1980s? There were many causes, and as with all matters pertaining to fire, it's about context. Fire synthesizes its surroundings.

Everyone points, with reason, to climate change. The West, in particular, and California with special intensity, have historically undergone long cycles of drought, but the one that started in the mid-1980s seems to have established a new baseline. Whatever had grown up under the more benevolent regime was now primed to burn. Still, climate acts on what is present: its changed order seems to be intensifying the patterns and processes that already existed. Even if climate were not changing, we would have a serious fire problem. It would just not be so savage.

There is plenty to burn. Again, the reasons are many, relating to changing land use that has allowed once agricultural lands to go to woods, brush, and houses, interest in moving public lands from commodity production toward nature protection and wilderness, and the legacy of past efforts to exclude fire. Thanks to conservation efforts a lot of badly used land had recovered, but the fire policies that helped halt the earlier abuses stayed in place, and led to a stockpiling of combustibles. Areas committed to natural processes had not, in fact, let those processes run their course. More fuels grew, and landscapes that had supported one fire regime now morphed to support others, often at larger sizes and at higher intensities and severity.

Invasive species have reshaped whole subregions, which is to say fuels, often at a vast scale. Cheatgrass is the most notorious, but there are plenty of other regime-changing grasses around; and pests and diseases, riding global transit routes, have interacted with drought to kill significant swathes of woodlands. A changing global economy met a changing global climate and bred monsters.

The spread of edge cities and exurban enclaves across formerly agricultural lands and sometimes into or against outright wildlands altered the arena for management. It is not just that the fires have grown worse: so has the environment in which people and fires collide. The potential of the fire-on-steroids era to inflict damage onto life and property has risen sharply. Not only are communities at risk from fire in ways that have not been true for a century in the U.S., but when wildland and urban fire agencies meet, urban fire wins. The wildland-urban interface is diverting attention and efforts away from managing fire on the landscape. Instead of building up both sides of the fire equation, we are transferring from the wildland to the urban.

The 1980s stalled a reorganization of fire agencies that was underway to support the more balanced fire policy. Institutions are the means by which we seek to prevent bad fires and promote good ones. In the 1970s Divisions of Fire Control morphed into Divisions of Fire Management, but then found themselves caught in a political windshear as environmentalism went from open bipartisanship to the provocatively partisan calculations that began in the 1980s. A national infrastructure had evolved around the U.S. Forest Service, but under the pushback, with conflicting and divisive instructions over its mission, and with mandates to overhaul and privatize its workforce, the agency grew progressively disabled, dysfunctional, even schismatic. Unable to lead, the largest of America's fire agencies defaulted to suppression.

Meanwhile there has been no loss of ignitions. Lightning is spasmodic in any place and time, but it has been kindling fires for at least 420 million years. Humans are more consistent, distracted, insidious, and litter the land with sparks either directly or through proxies like powerlines. About half of the megafires over the past 20 years have a human origin. By their ignitions people are extending fire seasons more than climate change is. Most starts occur around settlements. Our sheer presence seems to abrade the land in ways that kindle fire.

We're still trying to put the pieces together. Fire management has gone from a national matrix governed by a single agency and single strategy to an interagency, even intergovernmental collaboration to advance a variety of goals. Meanwhile, there is little political support other than for more firefighting, which is like reducing national health care to emergency medicine. A suppression-only policy merely aggravates the underlying causes. The American fire scene is the outcome of people and nature interacting; neither is in control. Fire is a driverless car, integrating everything around it, responding variously as different features loom larger. Sometimes it must respond to road hazards called fuel left by previous wrecks; sometimes to a tricky intersection called the wildland urban interface; sometimes to a dangerous curve called climate change; sometimes to a distracted driver called carelessness, swerving onto the shoulder and throwing sparks; sometimes to a reckless driver called politics, or to that crisis blizzard in which everything seems to happen at once and obscures the field of vision.

If you want to reduce it all to a single cause, invoke the Anthropocene. It's a world powered by fossil fuels that is increasingly expressing itself in feral flames. Too much bad fire, too little good fire - it's a global issue. With regard to fire, California is indeed like the rest of America, only more so, and America is like the rest of the Earth. Only more so.