Elliott Young is Professor of Latin American and borderlands history at Lewis & Clark College in Portland, Oregon and the author of Alien Nation: Chinese Migration in the Americas from the Coolie Era through World War II (UNC Press, November 2014). His new book is on the history of immigrant incarceration from the late nineteenth century to the present. 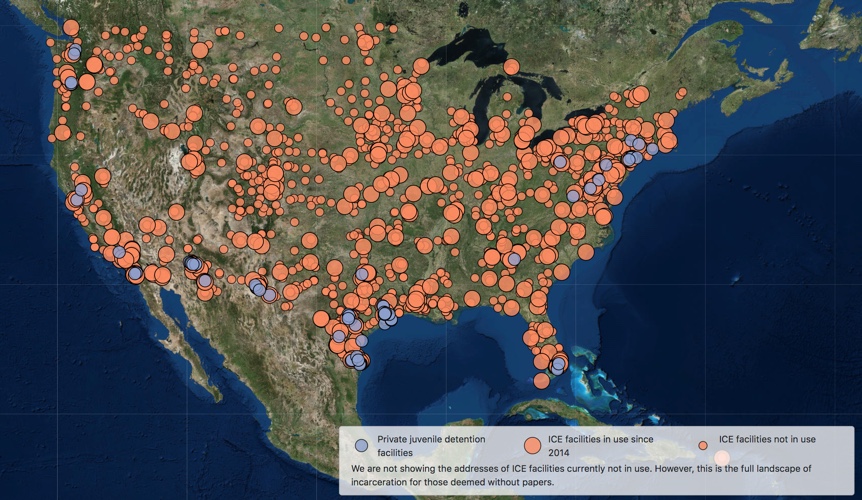 A rapidly deployed critical data & visualization intervention in the USA’s 2018 “Zero Tolerance Policy” for asylum seekers at the US Ports of Entry and the humanitarian crisis that has followed.

The above Torn Apart map of private and state migrant detention facilities across the country shows that we have become a nation of immigrant prisons rather than a nation of immigrants. Prison and jail populations have declined over the last decade, but that progress threatens to be reversed by Trump’s immigration detention policy. 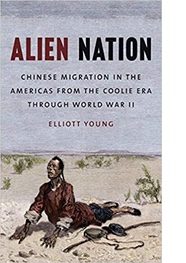 Trump’s zero-tolerance policy for all unauthorized border crossers will fill our prisons, clog our courtrooms and lead to the building of new mass detention camps.

The President’s Executive Order to stop separating families and instead to place them together in “indefinite detention” compounds the problem by throwing everyone behind bars together. In fact, one of the Order’s provisions (sec. 3 c) calls for the building of new detention centers.

The Department of Health and Human Services was already considering housing immigrant children on military bases back in May.  Now the Pentagon has agreed to provide space for 20,000 migrants on its military bases.

The full impact of the zero-tolerance policy announced on April 6 by Sessions is still unclear, but preliminary data from the Transnational Records Access Clearinghouse suggests a 30 percent spike in criminal prosecutions in April over March.  We are already witnessing the erection of makeshift detention camps in Texas, and the shipment of 1600 immigrants to federal prisons this month.

The policy of criminally prosecuting all border crossers, even those who are petitioning for asylum and are arriving with infants and children is a new low.  However, there is a long history of immigrant incarceration, including separating children from their parents and caging entire families.

The history of immigrant incarceration in federal prisons stretches back to the late 1880s when scores of Chinese migrants found in the United States without authorization were sent to a federal prison on McNeil Island, just off the coast near Tacoma, where they were sentenced to hard labor before being deported. The numbers of immigrants in detention increased in the 1920s as new quota laws criminalized the entry of thousands of southern and eastern Europeans.

During World War II, the US government imprisoned over 110,000 Japanese Americans in camps run by the US Army. At the same time, more than 6,600 Japanese, German and Italians from Latin America were kidnapped and locked-up in Immigration and Naturalization Services (INS) detention camps.  All told, over 31,000 “enemy aliens” and their families, including Jewish refugees from Nazi Germany, were put into detention during the war. Almost none of them were actually “enemies” or national security threats.

In the early 1950s, the US government launched what it called “Operation Wetback,” in which more than one million Mexicans were rounded up and sent back to Mexico. And then in the 1980s, over 125,000 Cuban and 80,000 Haitian refugees were held in INS detention camps, many for months and some for years.

Currently there are about 41,000 people held in ICE detention facilities on any given day. These do not include the thousands of children in the custody of the Department of Homeland Security, and these numbers are likely to increase dramatically if Trump has his way.

Since March, the Border Patrol has arrested around 40,000 migrants crossing the border each month. If that rate continues, we can easily have half a million immigrants behind bars by the end of the year if all of them are criminally prosecuted.  Given the backlog of more than 700,000 immigration cases, and wait times averaging over 700 days for hearings, we can expect to see more immigrants incarcerated for longer periods.

Under Trump, we may well see hundreds of thousands of immigrants in detention camps across the country, in addition to the more than two million Americans caged in jails and prisons.  The map of migration detention makes America look like a gulag archipelago and not the land of the free.