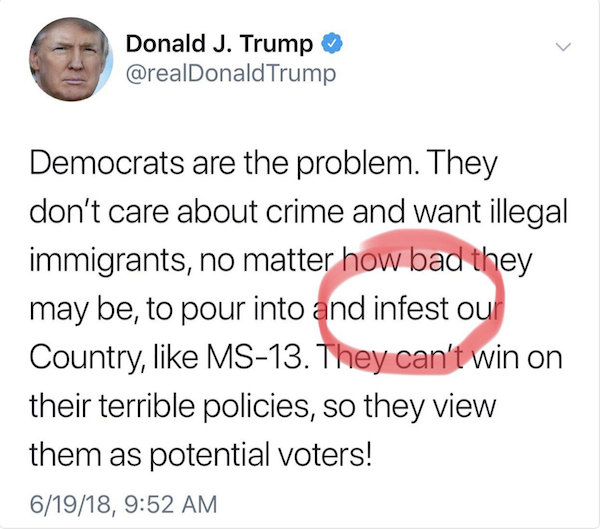 As jarring as it has been to see images of small children locked up in cages pleading to see their mom or dad, perhaps more troubling in the long term is the effort by President Trump and his supporters to strip away the humanity of immigrants, effectively to treat them as enemies in war.

Dehumanizing "the other" – framing them as less than human or the embodiment of evil – gives people a form of psychological permission to kill enemies in battle and treat the powerless with the type of cruelty and abuse we would never inflict upon people we know.

Those subjected to the emotional and physical violence suffer gravely; but it also takes a deep psychic toll on those doing the dehumanizing. How we reckon with this callous, cold-hearted, less forgiving side of our country may ultimately be the greatest challenge facing America once Donald Trump's presidency is over.

The Vietnam War is an object lesson in the cost of dehumanization. To fight the war, Americans labeled Vietnamese as "gooks" and "slopes" and claimed they "don't put the same high price on life as does a Westerner," as General William Westmoreland, the American commander in Vietnam, put it.

Seeing them as "such vermin of humanity," wrote former New York Times columnist Tom Wicker in 1973, "made it acceptable and understandable that they should be mowed down at My Lai and in countless free-fire zones, whether they were women, children, civilians or soldiers." It also allowed Americans to justify dropping three times the tonnage of bombs in Indochina than we did in all of World War II.

The Vietnamese still live with the consequences of this brutality – as do countless American soldiers who acted out the dehumanization that rationalized this war.

Nor was Vietnam the exception. Cheapening the humanity of an enemy may be the only way to ask young men to kill fellow young men their age, particularly in wars not of necessity but of choice. We rationalized two wars against Iraq by calling Saddam Hussein a threat to civilization, labeling Iraqis "towel-heads," and in the first Iraq war charging Iraqi soldiers with ruthlessly pulling babies out of incubators and leaving them to die on the floor, an allegation ultimately proven false but useful to the narrative purpose of dehumanizing Iraqis.

Even what contemporaries called our "splendid little war" of 1898 – the Spanish-American War – required a dehumanizing process. Building up to the war, our leaders labeled the Spaniards savage, bloodthirsty, barbarous butchers with "a devil's head and a tiger's heart."

Bigotry is another form of dehumanization, perhaps even more toxic because it cannot be excused by any exigencies of war. Denying the humanity of African Americans created the ideological, psychological, and cultural infrastructure of slavery and segregation – and with eerie echoes today, allowed slaveholders and merchants to divide parents from children with no evidence of compunction.

For African Americans, dehumanization remains very much alive when racists equate blacks with apes and police say they had to shoot unarmed men because they were hulking and menacing – even when the young men were small in stature and weight.

So when Donald Trump equates immigrants – brown and black immigrants in particular – with animals, when he infers they are insects who "pour into and infest our Country," when he implies they have no impulse control and commit rape, murder, and crime at will, he is effectively denying their humanity and declaring political and cultural war against them.

And as we've sadly seen throughout history, war has been used to justify cruelty, violence, and the denial of human rights.

To be sure, there is nothing specifically American about this process. Almost every country and culture has demonized "the other," calling them anything from "grasshoppers" to "vermin" to "two-legged animals." But the moral arc of America, to paraphrase Martin Luther King, Jr., has long bent toward expanding our community, including people from every corner of the earth, and condemning that ugly human impulse to dehumanize.

That we need to control our borders and demand respect for our laws is a view shared by Democrats and Republicans alike. But that goal doesn't need to be accomplished with the type of hatred and fear that the President and his supporters spew to justify his zero tolerance policies and approach.

So imagine if we reframed the conversation. Rather than view immigrants as a threat to America intent on exploiting us and visiting our nation with crime and violence, imagine if we saw them instead as people no different from our many immigrant ancestors who fled persecution and poverty and sought a better life and the American Dream.

That doesn't mean we would let everyone in, which the President claims is the Democratic alternative to his zero tolerance approach. But it might mean that we would address the issue – and the people – with the humanity they deserve. Case in point: give the Dreamers, who are American in every way but legally, a path to citizenship.

We are a nation that robustly praises our virtues and proclaims an exceptionalism built upon our devotion to human freedom and dignity. How can we be great if we are not good?