The Little-Known Reason for the Battle of Gettysburg

Declan Cronin is a 4th year student at the College of the Holy Cross. Catherine L. Thompson is a Visiting Assistant Professor of History there. 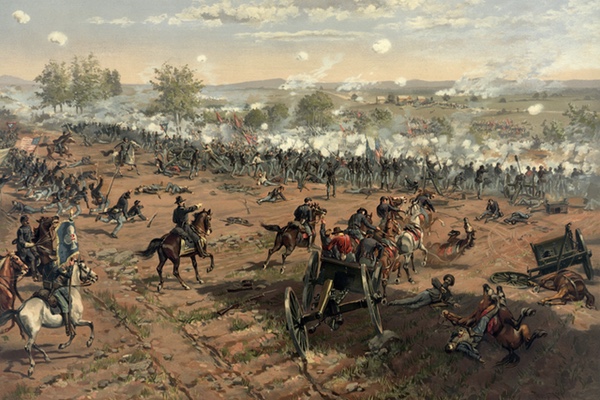 On the eve of the 155th anniversary of the Battle of Gettysburg, does anyone remember why it took place there? Or why it began on July 1st? Most recent scholarship would answer that Robert E. Lee designed an offensive operation into Pennsylvania to offset recent Rebel setbacks and to gain greater access to the rich harvests of the Shenandoah Valley. But that doesn’t really answer the questions of why there and why then.

It was because of a shoe.

Two pieces of leather, cheap stitching, a wooden sole, four eyelets, and a cowhide lace. Commonly referred to as the Brogan, this was the composition of the standard issue soldiers’ shoe during the American Civil War. They were often made straight last, meaning that the right and left shoes were identical. It took time to break them in, they were heavy, and they dried slowly. They were, nonetheless, an essential part of a soldier’s load out. Surely, the soldier with shoes had the advantage over his barefoot counterpart. When the rumor of a Brogan-filled warehouse in Gettysburg began to spread throughout the various camps of Robert E. Lee’s Army of Northern Virginia, Major General Henry Heth saw an opportunity to outfit his bedraggled troops. On June 30, 1863, he “ordered Brigadier General Pettigrew to take his brigade to Gettysburg, search the town for army supplies (shoes especially), and return the same day.” The rest, as they say, is history.

On his quest for the sought-after shoes, James J. Pettigrew’s Tar Heels of North Carolina headed towards Gettysburg. Instead of finding shoes and other military equipment, they found John Buford’s Union cavalry. Lee had warned his officers to hold off on engaging any enemy detachments until the Army of Northern Virginia had arrived in full force. Heeding Lee’s counsel and wishing to play it safe, Pettigrew withdrew and returned to report what he had seen.

When Pettigrew reported back to Heth, Heth was more concerned with the prospect of obtaining shoes than with the Federal cavalry Pettigrew had encountered. Together, they went to A.P. Hill to ask for his opinion. Hill’s reaction echoed Heth’s; the lure of those boots was too great for him to ignore. So Hill downplayed the Federal presence, surmising that it was “probably a detachment of observation” rather than a formidable fighting force. The following morning, Pettigrew’s men departed for Gettysburg with little inkling of how the day would unfold. Thus, the turning point of the Civil War began with the pursuit of shoes.

After skirmishes along McPherson’s and Seminary Ridge on the outskirts of Gettysburg, Heth decided to make a more aggressive push with Brigadier Generals Joseph R. Davis and James J. Archer and their troops. Archer’s men made a climb up McPherson’s Ridge expecting to find the cavalry they had encountered before. Instead, they came face to face with infantrymen and their opponents and they were no run-of-the-mill Union troops. They were the Iron Brigade, a fierce unit of “hard-bitten Westerners.”

The Iron Brigade was the last Federal detachment that Archer wanted to see. Like bright colors on the back of a poisonous frog, the Brigade’s distinctive black hats served as a warning of their lethality to those that dared to approach. By the end of the day, the Iron Brigade fell back, but the tattered Rebels failed to take advantage: Pettigrew’s Tar Heels were “literally [sic] cut to pieces” in their face off with the Iron Brigade at Willoughby Run.

Although they were spread thin that day, Buford’s men were outfitted with some of the most advanced weapons available at the time, giving the Union soldiers an incredible advantage. Among the weapons was the seven-shot Spencer carbine, a repeating rifle. The rifle allowed the Federal cavalry to fire from Monday to Sunday. In the time it took the Confederates to get one shot off, the Spencer carbines could fire five rounds. This substantial firepower proved to be vital for Buford’s men, who managed to halt the Confederate advance, allowing time for Federal reinforcements to arrive for the remainder of the battle.

In a fight between two worn down and weary armies, the possession of shoes or a better rifle could dictate the outcome of the day. For the Federals, victory would not be achieved by capturing major Southern cities but, rather, the war would be won by “gradually depriving them [the Rebels] of the resources and recruits for maintaining their armies.”  And it was working. The enticement of supplies led Pettigrew to the little town of Gettysburg, Pennsylvania on July 1st, 1863.

Certainly, the Battle of Gettysburg did not simply come down to shoes, funny hats, and repeating rifles but, as we approach the anniversary of the battle of Gettysburg this summer, we cannot forget that the Rebels’ search for boots did lead to the initial contact at Gettysburg. In remembering Pettigrew’s Tar Heels and Buford’s cavalry, we remember the very men who comprise the Americans that Lincoln spoke of so eloquently when he implored humanity to “never forget what they did here” during his dedication of the Gettysburg National Cemetery.