Michael Goodyear is a J.D. candidate at the University of Michigan Law School. He holds a degree in History and Near Eastern Languages and Civilizations from the University of Chicago, where he specialized in Byzantine history. 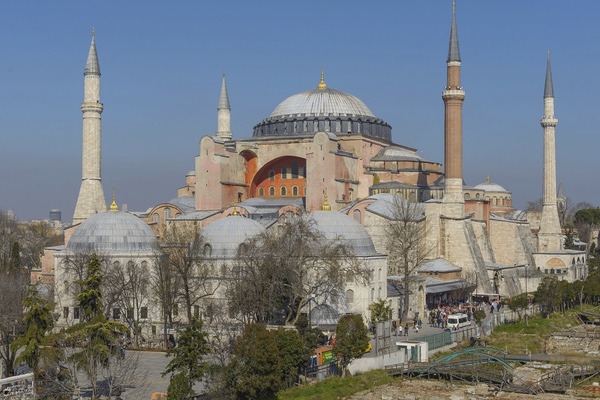 The sun was setting on the Roman Empire. After 2,000 years, the empire of Augustus, Constantine, and Justinian, whose annals were replete with conquests, wealth, and glory, was on its knees. John VI Kantakouzenos’ (r. 1347-1354) coronation in Constantinople in 1347 took place not in the grand Hagia Sophia, which lay in disrepair, but at the smaller Church of the Virgin at Blachernae. He was not crowned with the imperial jewels, which had been pawned off to Venice, but with a crown of mere glass baubles. At the subsequent banquet, guests no longer dined off of dishes of silver and gold, but made do with pewter and clay. The fortunes of Rome, now in the guise of the Byzantine Empire, had reached their nadir.

But even when the Empire’s coffers were bare, enemies besieged imperial forces on all sides, and borders shrunk closer and closer to Constantinople, Western Europeans still thought of Constantinople as an exotic, prosperous land. Crusaders were partially galvanized to attack Constantinople in 1204 due to the loot they could recover. Travelers such as Englishman John Mandevillein the mid-14th century recounted with awe Constantinople’s hallowed churches. Even when Constantinople fell to the Ottoman Turks in 1453, horror resonated throughout Europe at the loss of this far off bastion of Christendom.

This image was not by pure accident. The Byzantines had purposefully cultivated the image of a majestic and wealthy land, and it had been doing so for centuries. Especially with scholars drawing distinctions between East and West, many have seen the West as the primary agent in making Byzantium different, a foreign “Greek” empire rather than one bound up in the same Roman heritage. However, it was the Byzantines themselves who crafted this image of a different, more fantastical empire. Responding to changes in European politics, Byzantium leveraged not only its fabulous capital of Constantinople, but during the ninth and tenth centuries the emperors also employed extensive court ceremonials, including the famous golden automata, to create an image of exotic otherness and majesty.

That all changed when Pope Leo III crowned Charlemagne Roman emperor on Christmas Day in the year 800. There were now two emperors, and the Byzantine emperor reluctantly accepted this fait accompli a decade later. Although the title of Roman emperor was only tenuously held for the next 150 years, the damage to Byzantine prestige was already done and perceptions were already changing. Byzantium became seen as more foreign and distant. A schism between the eastern and western churches broke out in the mid-ninth century. Westerners began to refer to Byzantium as the “Empire of the Greeks,” to belittle and otherize them. The aura of the Roman Empire was at least partially lost to Byzantium in the West.

Byzantium’s strongest asset to create a new sense of awe in its European neighbors was its capital city of Constantinople. Approaching the city from sea, visitors are still stunned by the picturesque outline of the city. From land, travelers would have been welcomed by Constantinople’s mighty triple set of walls, a practically impregnable fortification that turned away dozens of would-be conquerors over the centuries. Walking along the main road, the Mese, Europeans would have marveled at the number of products for sale from across the known world: furs from the lands of the Rus, spices from Baghdad, silks from China. The Book of the Eparch tells us that trade was so extensive that the Byzantine emperor strictly regulated the myriad businesses. They also would be inside the largest city in Europe, several tens of thousands strong. Rome, Paris, and London at the time were just overgrown villages in comparison.

Yet perhaps the most impressive part of Constantinople was the Hagia Sophia. Justinian built the great church in the 6th century, and upon its completion he supposedly exclaimed, “Solomon, I have surpassed thee.” Russian emissaries in the 10th century were similarly impressed and reported back to Prince Vladimir of Kiev that “we did not know where we were, on heaven or on earth . . . . Only this we know, that God dwells there among men.” Even today, nearly 1500 years since it was erected, the Hagia Sophia still has the power to inspire a unique admiration in visitors from across the globe.

However, Constantinople had existed in all of its splendor for centuries. While emperors likely leveraged its grandeur for their own aims, they created new aspects of majesty in the 9th and 10th centuries. Byzantine emperors introduced elaborate new ceremonies into court processionals, which comprised hundreds of pages in Emperor Constantine VII’s (r. 913-959) work De Ceremoniis. There was a right place and time for everything. Both domestic and foreign dignitaries were ranked in order of honor. It was almost impossible for even embassies from France or Germany to see the Byzantine emperor, and if they did, they often waited for months to do so. The presentation of a highly refined and stately court no doubt left a very different impression than the disorderly and significantly smaller courts of the West.

Perhaps the most memorable arrow in Byzantine emperors’ quivers was the use of gold automata. These automata were machines coated in gold and bedecked with jewels. While the technology was not necessarily new, the automata were incredibly novel and wondrous to medieval Europe. When a dignitary finally did get to enter the throne room, he would have been startled and awed by them as was German envoy Liutprand of Cremona in 949. Liutprand recollected:

In front of the emperor’s throne was set up a tree of gilded bronze, its branches filled with birds, likewise made of bronze gilded over, and these emitted cries appropriate to their species. Now the emperor’s throne was made in such a cunning manner that at one moment it was down on the ground, while at another it rose higher and was to be seen up in the air. This throne was of immense size and was, as it were, guarded by lions, made either of bronze or wood covered with gold, which struck the ground with their tails and roared with open mouth and quivering tongue. Leaning on the shoulders of two eunuchs, I was brought into the emperor’s presence. As I came up the lions began to roar and the birds to twitter, each according to its kind, but I was moved neither by fear nor astonishment . . . After I had done obeisance to the Emperor by prostrating myself three times, I lifted my head, and behold! the man whom I had just seen sitting at a moderate height from the ground had now changed his vestments and was sitting as high as the ceiling of the hall.

These automata had been built by Emperor Theophilos (r. 829-842), but had supposedly been melted down for cash by his son Michael III (r. 842-867). However, by the reign of Constantine VII they were up and running once again. The throne was so magnificent that it became referred to as the “Throne of Solomon,” conjuring up images of the biblical king’s own “great throne of ivory . . . overlaid . . . with the best gold,” which notably also featured roaring lions.

Although the magnificent automata disappeared sometime after Constantine VII’s reign, they had served their purpose. They had inspired awe in visitors and enhanced Byzantium’s aura of majesty and prestige. In the coming centuries, as the Byzantine Empire continued its slow decline, Byzantine emperors continued to innovate and use court ceremonials and Constantinople to project a much greater impression of strength than Byzantium could actually muster.

Even after the façade of strength was thrown to the side and Byzantium was exposed for the rotting edifice it was during the 4th Crusade, the strategy did not disappear. The Byzantine Empire used a mix of otherness, majesty, and ceremony to fascinate the world and keep everyone guessing as to the true nature of Byzantine power. It was the Byzantines themselves who crafted this image of an empire apart from the rest of Europe. Western Europe’s shifting views were only largely in reaction to these efforts. Although the golden automata are long gone, Byzantium continues, even in death, to fascinate visitors to Istanbul with the ruins and memories of its imperial capital and craft our own otherworldly impressions of the former imperial city and its empire.