The Year The World Almost Blew Up – And Nobody Noticed

Taylor Downing is a historian, author and an award-winning documentary producer who has written several books on twentieth century history including "Cold War, Churchill’s War Lab" and "Breakdown." His latest book, 1983: Reagan, Andropov, and a World on the Brink, was published in April 2018 by Da Capo Press. 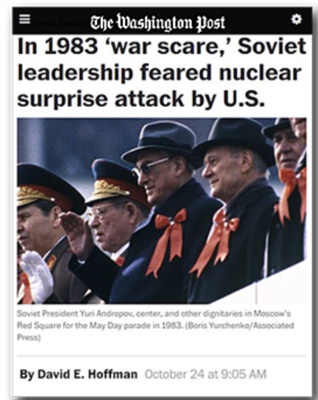 On November 9th 1983, the leadership of the Soviet Union nearly ordered a full pre-emptive nuclear strike against the US and Western Europe. The entire Soviet nuclear arsenal was readied. Huge SS-19 intercontinental ballistic missiles in their silos were put on standby. SS-20 mobile missile launchers deployed to their battle stations in the forests and swamps of Russia. Nuclear submarines slipped out of port and took up their launch positions. In East Germany and Poland, aircraft went onto strip-alert with their engines on, waiting at the end of runways for orders. 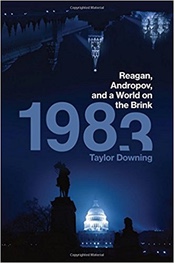 This extraordinary incident was not picked up at the time and has remained little known ever since. Unlike the Cuban Missile Crisis that took place very much in the open, with Presidential television addresses and hour-by-hour news reports, the November 1983 crisis took place entirely behind closed doors. Moreover, the Central Intelligence Agency and the Defense Intelligence Agency totally missed it, prompting Robert Gates (then deputy director of the CIA) to say later, “We may have been at the brink of nuclear war and not even known it.”

How did this come about? 1983 was a supremely dangerous year. Ronald Reagan in the White House was using powerful and aggressive language against the Soviet Union, which in March he called an evil empire. Later that month he launched his Strategic Defense Initiative aimed at shooting down incoming missiles in space, rapidly labeled his Star Wars program. This initiative hugely destabilized the Kremlin, whose leaders feared that decades of nuclear expenditure would overnight be made useless. In addition, he was overseeing the biggest peacetime build up of conventional military forces in decades, nearly doubling the Defense budget. The Pentagon got new bombers, tanks and missiles and a huge expansion of the Navy. The National Security Agency budget increased by 150%. The military began a series of Psychological Operations (or PSYOPS) against the Soviet Union. Aircraft flew up to the edge of Soviet airspace and then turned away at the last minute. Two naval carrier groups led by the USS Enterprise and the USS Midway began an exercise in the Sea of Okhotsk to test Soviet reaction times and defensive postures. Reagan wanted ultimately to negotiate with the Soviet Union but only from a position of strength.

Then, in the summer, the climate grew even more tense when Korean airliner KAL 007 veered more than 350 miles off course over a sensitive military area. The Soviets mistook it for an American spy plane and in a tragic blunder shot it down leading to the loss of 269 innocent lives. Reagan and Secretary of State George Schultz erupted calling it "barbarous" and the act of "terrorist state."

Had the Soviet leadership at the time been strong and robust they might have dismissed all this. But Yuri Andropov had replaced Leonid Brezhnev the year before. Andropov had been head of the KGB from which he inherited a strong sense of paranoia. Everywhere they looked, KGB agents found enemies out to undermine the Soviet Union. Andropov was convinced the US and the West were building up an arms superiority that would encourage them to launch a first strike against Moscow. The new Pershing II and Cruise missiles could hit Moscow in six minutes after launch, not even giving the Kremlin leaders enough time to reach their secure bunkers. Andropov instructed the KGB to carry out a search for signs that the West was about to launch its nuclear weapons, known as Operation RYaN. Not surprisingly, the intelligence service came back with increasingly alarming reports that suggested a nuclear attack was indeed imminent.

Moreover, the new Soviet leader was not a well man. He had a weak heart and his kidneys were failing. He was put on a kidney dialysis machine, a rare form of treatment in the Soviet Union. But Andropov found the dialysis process exhausting and grew weaker daily. He moved out of the Kremlin and, unknown to the Soviet people, continued to govern from a clinic twenty miles west of Moscow. It’s difficult to imagine that Andropov’s failing physical health could not have affected his state of mind.

Into this febrile atmosphere, at the beginning of November, NATO began a war game called Able Archer 83. It was a signals exercise in which NATO chiefs, roundly defeated in a conventional war by the forces of the Warsaw Pact, rehearsed the protocols for requesting the use of nuclear weapons to strike back at the Soviet Union. Soviet radio operators followed every moment of Able Archer. But in the Kremlin, this proved the final straw. The Soviet leaders decided Able Archer must be a case of maskirovka, or deception. This, they believed, was not a war game but the real thing.

So it was that the world came to the brink when on November 9th Andropov in his clinic and chief of the general staff Marshal Ogarkov in the Moscow nuclear bunker had their fingers hovering over the nuclear button.

Fortunately for the future of the human race they did not launch their nuclear missiles that night. Wiser and more sober counsels prevailed. Maybe they were influenced by the memory of the immense destruction of the Second World War, when 27 million Soviet men and women lost their lives and thousands of square miles of territory were devastated. Certainly the knowledge that a nuclear exchange would bring even greater destruction made the Soviet leaders hesitate. And of course NATO did not fire any missiles against the Soviet Union. It was only an exercise and not a cover.

Using thousands of newly declassified documents discovered by the National Security Archive at George Washington University, the little known 1983 crisis can now be told in full for the first time. In many ways it marks the last paroxysm of the Cold War. But as twenty-first century dangers resonate around the world today, it is timely to look back and see how crises can spiral out of control from small incidents. And how both sides in a dispute can totally fail to understand the actions or behavior of the others. It is a salutary reminder of how a tense situation can rapidly unravel.