Edmund F. Wehrle is a Professor of History at Eastern Illinois University, Charleston, and the author of Breaking Babe Ruth: Baseball’s Campaign Against Its Biggest Star. 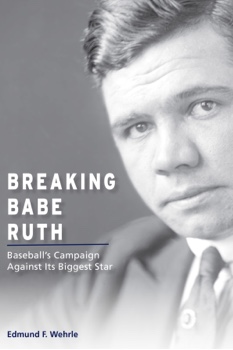 Baseball season soon will be upon us again, and all elements appear in place for a resurgence of the national game. In the past, baseball’s popularity flourished in times of national division, the game providing comforting connection, tradition, and diversion. If political strife works in favor of baseball: expect a banner season. Meanwhile, football—late claimant to the mantle of “national pastime”—appears mired in political squabbles and burdened by an existential crisis over brain injury. This may be the year when baseball reclaims its past glories.

A game rich in tradition, baseball—America’s dominant sport from the mid-nineteenth to the mid-twentieth century—has attracted the serious attention of some fine historians: Steven Reiss, C. Edward White, and Charles Alexander among others. Harold Seymour and David Q. Voigt set a standard for serious research and insightful writing, each penning multi-volume histories of the game (although these works are now decades old). Of course, there’s also the stirring Ken Burns documentary series.

Yet a gap remains between public and scholarly attention. Each year, publishers churn out dozens of books on baseball history, most focusing on the minutia of the game and written by amateur historians. At a time when cultural history reigns supreme, it is odd that baseball, a ritualistic game loaded with cultural cues and signifiers, hasn’t attracted more scholarship, especially from a younger generation of historians. For those versed in how the complexities of race, class, and gender intersected with economics and culture to forge modern America, baseball would seem a natural for closer inspection.

Indeed, historians have applied, for instance, the rubrics of race and gender to the national game. Fine histories of the Negro League have been prepared by Robert Peterson, Don Spivey, Michael Lomax and others. Yet, we still need to know more about how segregation shaped white baseball. In the same way historians now view segregation as affecting every element and institution of the white Jim Crow South, so might race have defined baseball, even in its pre-Jackie Robinson, segregated days. Likewise, the game emerged and remained, as sociologist Anne Roschelle suggests, “a man’s domain”—with a few prominent exceptions. Gender operates, argue cultural historians, even in the absence of women. The national game, then, has much to tell us about gender dynamics.

When friends and colleagues heard I was writing a book about Babe Ruth, the response was hardly encouraging: “Can anything really new be written about a figure so studied and so familiar?” While a neophyte to sports history (my previous work dealt with US international relations in Southeast Asia), I felt certain that dogged research and an alertness for how race, class, gender, and economic power operate would yield new insights. Indeed, my research revealed a very different Babe Ruth from the Falstaffian, sinner/saint so often depicted. I found that a player dismissed by perhaps his best biographer as having the mind of an adolescent was actually an early proponent of trade unionism for professional ball players. Throughout his career, in fact, Ruth remained an outspoken critic of the harsh reserve clause system and the often shoddy treatment of his fellow players.

By 1920, his debut year with the Yankees, Ruth emerged simultaneously a mammoth blessing and a potential curse for baseball. His popularity and importance to baseball was like nothing seen before or since. At times, he inspired the sort of hysteria later sparked by a Sinatra, Elvis, or Michael Jackson at their heights. After two decades of labor wars, battles against rival upstart leagues, and surly, violence-prone stars like Ty Cobb, Ruth offered a charismatic and unifying front—completely diverting attention from the game’s troubles.

Yet the Babe’s outspokenness remained a problem. As his fame soared, baseball officials fretted he might strike out on his own and form a rival league—potentially dividing and destroying major league ball. Such a challenge in the form of the Federal League had been beaten back by baseball magnates only recently. Meanwhile, interested parties sought to revive a players’ union—also dreaded by the paternalistic baseball establishment. A regular at horse tracks around the country, Ruth’s propensity for gambling (although he never bet on baseball) also proved worrisome. Late in the 1920 season, as Ruth smashed the single-season homerun record, news broke of the Black Sox scandal. Controlling its workforce became a priority for owners and league officials.

So began a campaign to reign in baseball’s biggest star. In 1921, newly appointed baseball Commissioner Kenesaw Mountain Landis suspended Ruth on charges of launching a postseason barnstorming tour without permission. A miserable season for the Babe followed. Newspaper coverage turned decidedly negative. Ruth recovered with a well-publicized comeback in 1923, but in 1925, he found himself struggling in spring training with a serious illness. The source of his ailment remains unclear, but writers mocked his collapse as “the stomach ache heard around the world.” The Yankees’ business manager peddled rumors that venereal disease was the real issue. A plot to humble the opinionated star was clearly afoot. Even when he returned to the lineup, Ruth struggled. At one point in the 1925 season when Ruth clashed with manager Miller Huggins, newspapers “outed” Ruth’s live-in girlfriend.

Sportswriters, in fact, proved particularly useful in the battle against Ruth. Most were subsidized by the teams they covered; first-class travel came gratis, but writers were expected to toe management’s line—and they did. When it came to Ruth, the strategy was to depict him like an overgrown child. His nickname, the Babe, served this campaign well—as did rumors about his racial background. From his earliest days, Ruth’s dark complexion and facial features drove gossip about his racial lineage. Ruth’s generally liberal attitudes about race fed the whispers. On barnstorming tours, Ruth-led squads would frequently play Negro League teams. The Babe would conspicuously hang with black players talking baseball, and he supported black charitable causes (alongside all manner of charities). As a result, the Babe had a strong following among African Americans. Opposing players, however, throughout Ruth’s career wielded racist barbs when riding the Babe during games. Blatant references rarely found their way into print, but sportswriters frequently used what appears coded language such as labeling Ruth “the big baboon.” Stories of Ruth’s prodigious appetite—whether for food, sex, or just plain fun—also appear rooted in the racial stereotyping of the times. Baseball’s campaign against Ruth bore more than just a passing whiff of the racism so prevalent in early 20th Century America.

Later in his career, when Ruth’s personal life settled, and he adopted a more diplomatic tone toward those in power (although, especially during contract negotiations, Ruth continued to lambaste baseball’s lopsided labor power structure), another weapon was used against him: gender. Unlike today’s sports figures, Ruth had no real agent representing his interests. Christy Walsh, an enterprising journalist who worked with Ruth starting in 1921, offered business advice and helped make promotional deals. But Walsh had numerous other clients and ran an extensive newspaper syndicate. In negotiating his contracts and in many of his professional decisions, Ruth was left to himself. He had one strong voice in his corner: his second wife, Claire Ruth, whom he married in 1929. Claire quickly took the job of Ruth’s self-proclaimed “manager and secretary.” She was outspoken about her knowledge of the game. When it came to baseball, she announced, she knew “about as much about it as anyone off the diamond… Sometimes by the way they perform, I think I know as much as the players.” Baseball’s leadership class hardly appreciated Claire’s candor nor her aggressive promotion of her husband. In a male-centered world, Mrs. Ruth stood out and was resented. She provided vital support for the Babe and allowed him to concentrate on baseball, but her strong presence rubbed many the wrong way and made Ruth appear the junior partner in a relationship that flipped gender norms. In the early 1930s, as Ruth sought an opportunity to transition to a manager position, several owners bypassed the Babe, fearing Mrs. Ruth. If I hired Babe, fretted Phillies owner and manager Connie Mack, “She [Claire] would be managing the team in a month.”

In the end, Ruth never got his chance to manage a team, an undertaking he hoped would help him evolve from boy wonder to responsible adult without separating him from the game he loved. Ruth’s independent streak and the power he briefly held over baseball was never forgiven. Today, he is remembered much as his critics among baseball’s leadership ranks would have it: as an overgrown boy not fully to be trusted. Tropes related to gender and race helped reinforce this image. Significant truths about a national hero appear still distorted by a smoke screen set off by baseball’s establishment.

We may well be on the cusp of a second golden era for baseball. All pieces seem in place for a great revival. Let’s hope that historians join to embrace complexities and fullness of baseball, a game offering an invaluable window to understanding American culture.