Gordon S. Wood is the Alva O. Way University Professor and professor of history at Brown University. His books have received the Pulitzer, Bancroft and John H. Dunning prizes, as well as a National Book Award nomination and the New York Historical Society Prize in American History. His latest book is Friends Divided: John Adams and Thomas Jefferson. A version of this article first appeared in the Wall Street Journal. 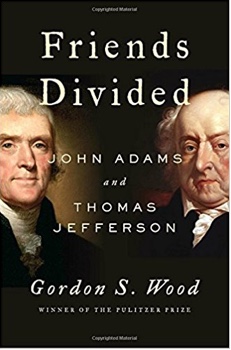 During the first decade of our nation’s history the two presidential electoral contests of 1796 and 1800 were as clearly and coherently expressive of conservatism and liberalism as any elections in our history. The conservative and liberal parties, the Federalists and the Jeffersonian Republicans, were led by two distinguished patriots, John Adams and Thomas Jefferson, and the partisan campaigns waged by their parties were as bitter and scurrilous as any in our history.

Adams and Jefferson had once been close friends. In 1775 they met in the Continental Congress and found that they were alike in their enthusiasm for declaring independence from Great Britain. In the 1780s the two patriots were thrown together as ministers abroad where they and their families further cemented the bonds of friendship. When they returned to the States they ended up, following George Washington’s two terms as president, as the presidential candidates of the two emerging political parties.

Although the Federalist Adams squeaked into the presidency in 1796 by three electoral votes, he lost much more decisively to the Republican Jefferson in 1800. Since Adams had taken for granted his reelection as president, he was deeply humiliated by his loss. The break between the two former friends seemed irreparable.

The two patriots were as different from one another as could be imagined. Jefferson was a radical eighteenth-century-style liberal who was as extreme in his views as a popularly elected official could be. In his attitude toward government, especially the federal government, he did not resemble a modern liberal. He believed in minimal government, which was the progressive position at the time, shared by Thomas Paine, William Godwin, and other Anglo-American radicals. Instead of the strong fiscal-military state that Alexander Hamilton and other Federalists wanted, Jefferson, as he said in his inaugural address as president, sought only “a wise and frugal government,” one that kept its citizens from injuring one another but otherwise left them “free to regulate their own pursuits of industry and improvement.”

Like most enlightened liberals at the time, Jefferson had a magnanimous view of human nature. He believed literally in what he wrote in the Declaration of Independence, that all men are created equal (in his case only all white men) and that the obvious differences among individuals were due to the effects of the environment in which they were raised. In other words, nurture,not nature, was all important. Consequently, like most Americans today he put an enormous emphasis on education.

Like other liberals Jefferson was optimistic and confident of the future. He thought the educated American electorate would chose as its leaders only natural aristocrats, virtuous and talented men like himself. He believed that the world was getting better, becoming freer and more democratic, and that the new republic of the United States had a special role to play in fulfilling that future. America, he said, was “a chosen country” and “the world’s best hope.” Jefferson invented the ides of American exceptionalism. Despising monarchy, he became a true believer in the republican revolutions that he hoped would spread everywhere in the world. His support for the French Revolution was unbounded and was worth all the bloodshed and lives lost in its name. If only an Adam and Eve were left alive in every country, but left free, he wrote in 1793, it would be better than it is now.

The Federalist John Adams was very different. He was a conservative, perhaps the most conservative president we have ever had. But Adams was anything but a Ronald Reagan type conservative.  He had a sour and cynical view of human nature. He was pessimistic about the future and a severe critic of the Jeffersonian conception of American exceptionalism. Adams said over and over that America was no different from other countries. Americans were just as vicious, just as sinful, just as corrupt as other nations; there was, he said, no special providence for the United States.

Indeed, Adams was the ultimate realist, committed to “stubborn facts.” He challenged every American dream and myth, especially the belief that all men are created equal. He believed that we were all born unequal, and that education could not do much about the inherent differences among people. He didn't know about genes and DNA, but he certainly was convinced that nature, not nurture, was what mattered most. He told Jefferson that he had visited a foundlings’ hospital in France and had observed babies who were only four days old and was struck by the great inequalities among them. Some were ugly, others beautiful; some were stupid, others smart. “They were all born to equal rights, but to very different fortunes; to very different success and influence in life.”

Society, he said, was inherently unequal, and unlike Jefferson he believed that the aristocrats who would inevitably rise to the top in republican America would not necessarily be the best and wisest men. They were more apt to be the richest, the most attractive, the most ambitious, and the wiliest.

In contrast to Jefferson, Adams did not disparage big government, but he did fear the unrestrained power of government. No one contributed more to America’s checks and balances and separation of powers than Adams. He singlehandedly created the limited veto power granted to America’s executives.

Adams had little confidence in democracy and the virtue of people, and consequently he was willing to borrow some of the elements of the English monarchy to offset the populism of American republicanism. He thought that sooner or later America’s elections would become so partisan and so corrupt that we would have to turn to having officeholders serve for life; eventually, he said, we would have to follow the example of England and make the president and the senate hereditary.

Despite these obvious differences between the two political opponents, however, there were memories of their earlier friendship that ultimately made their reconciliation possible. In 1812 Dr. Benjamin Rush, appealing to their collaboration in 1775-1776, helped to bring the two men together. Over the next fourteen years Adams and Jefferson exchanged over a hundred and fifty letters, with Adams writing three times as many as Jefferson. Jefferson made the reconciliation work. His characteristic courtesy and politeness, his aversion to any sort of confrontation, saved the relationship.

Although James Madison could never understand what his closest friend Jefferson saw in Adams, Jefferson realized that Adams was a man of “rigorous honesty” and realistic judgment. Jefferson claimed that once one broke through Adams’s crusty surface, the irascible Yankee was as warm and amiable as a person could be. Jefferson tolerated better than most Adams's facetious and ribbing manner. In 1815 with the Bourbons back on the throne of France Adams couldn't help teasing Jefferson: What do you think of the French Revolution now, Mr. Jefferson? Jefferson, polite as always, suffered all this razzing in good humor.

The two men valued their correspondence too much to endanger it, and thus they tended to avoid controversial topics, especially slavery. But in their exchange of letters the two men came to realize that they both equally and deeply loved their country. They knew that their combination of idealism and realism had helped create the country, and that realization was enough to make possible the revival of their friendship. It helped that they had a common enemy in Alexander Hamilton.