Daniel K. Williams is a professor of history at the University of West Georgia and the author of God’s Own Party: The Making of the Christian Right. 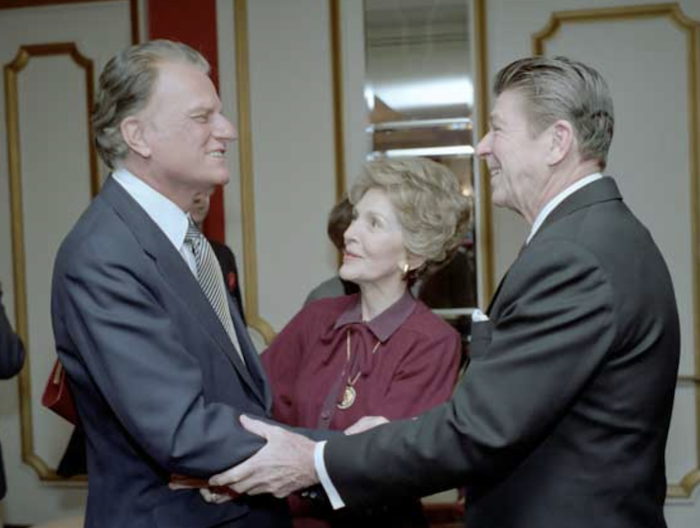 The death of Billy Graham occurred at a moment when white American evangelicals – a group that he, more than any other figure of the twentieth century, helped to galvanize and lead into the corridors of power – were stronger Republican partisans than ever, with 82 percent of white evangelical voters casting their ballots for Donald Trump in the 2016 presidential election.  Perhaps partly for that reason, obituaries for Graham invariably note his involvement in Republican politics.  Who can forget his private conversations with Richard Nixon in the Oval Office or his prayers at presidential inaugurations? 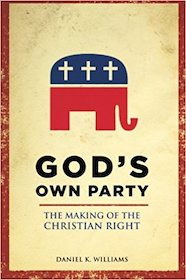 Yet when compared to the politics of contemporary evangelicals – including his son, Franklin Graham – Billy Graham’s Republican partisanship looks a little odd.  He developed close alliances with Republican centrists, such as Nixon and Dwight Eisenhower, but distanced himself from the party’s conservatives.  He refused to support Barry Goldwater in 1964, and in the 1980s he criticized Ronald Reagan’s nuclear arms buildup.  When Jerry Falwell, Pat Robertson, and other conservative evangelicals mobilized the Christian Right in the late twentieth century, Graham not only refused to participate but even issued a mild rebuke.  At the same time, many of the issues that concerned Falwell had been the targets of Graham’s sermons for years; on issues of public morality, Graham’s views were hardly distinguishable from the Religious Right.

What, then, is the relationship between Graham’s political activities of the mid-twentieth century and contemporary evangelical conservative politics?  Is modern Christian conservatism the product of Graham’s politicking or a repudiation of his values?  Perhaps it is a mix of both.

Like a later generation of Christian Right activists, Graham viewed politics as a venue to effect a national moral revival, and he was attracted to hawkish leaders who combined a tough stance against Communism with a public endorsement of Protestant Christianity.  In the 1950s, he decided that Eisenhower was the “strong spiritual leader” who would lead the nation back to God.  Though the general had not been a church member before his first presidential campaign, once elected he embraced a public expression of Christianity on a scale that few twentieth-century presidents equaled.  Not only did he frequently mention God and religion in his speeches and make weekly churchgoing a regular habit but he also led a prayer at his own inauguration and made it a point of calling upon God at the beginning of Cabinet meetings.  Graham was ecstatic about the prospect of an anticommunist military leader who was a “man of prayer.”  The gratitude extended to Eisenhower’s vice president, Richard Nixon, whom Graham called a “splendid churchman.”  When Nixon ran for president against the Catholic John F. Kennedy, Graham did everything he could to mobilize “a dedicated Protestant vote to counteract the Catholic vote.”

But if Graham’s attempt to mobilize an evangelical voting bloc to preserve the Christian identity of the nation was a precursor of the Christian Right of the next generation, there was also one major difference: Graham’s support for the Republican Party of Eisenhower and Nixon was based not on a set of issue positions but on a perception that the GOP’s leadership was Christian and moral.  He lauded Eisenhower not so much because of his policy positions but because he viewed him as a spiritual leader.  And even Nixon, whom Graham was later dismayed to discover was a profane manipulator, earned Graham’s trust by portraying himself as a national moral leader – a man who, Christianity Today declared in 1972, could lead the “nation out of its ethical morass.”

Graham’s instincts for what was moral and Christian usually led him to favor political centrists.  On issues of race, he steered a centrist course, insisting on integration at his evangelistic crusades and supporting the Civil Rights Act but criticizing civil disobedience among African American protestors.  His favorite congressional Republicans were moderates such as Walter Judd and Mark Hatfield, both of whom he suggested as possible vice-presidential choices for Nixon.

To what extent, then, is the Christian Right Graham’s creation?  Graham mobilized evangelicals to vote, and linked the evangelical cause with anticommunism, military preparedness, and Christian nationalism, just as Falwell and Robertson did.  But when the Christian Right emerged at the beginning of the Reagan presidency, Graham cautioned his fellow evangelicals about their newfound alliance with political conservatism.  “The hard right has no interest in religion except to manipulate it,” he declared in 1981.

For the Christian Right, the alliance with the GOP rested on a narrow agenda of shared policy stances, but for Graham, the goal was always larger.  His ultimate aim was always national spiritual revival – not merely legislative victories on a particular set of moral issues, such as abortion or sexual mores – which is why he favored consensus candidates who could lead a broad coalition of Americans back to a moral foundation through their personal example.  Graham learned, to his chagrin, that this might have been too much to expect from a politician, and he warned evangelicals after his experience with Nixon about the dangers of putting too much faith in politics.  But even at his worst, Graham was not a cynic; he never consciously supported an immoral candidate for the sake of the person’s policy positions.

In that regard, Graham represented a bygone era in American evangelicalism – an era when politicians’ perceived leadership abilities and Christian identity mattered more to evangelicals than their particular stances on the issues, and when many centrist-minded evangelicals were wary of identifying the gospel with right-wing politics.  Though Graham’s political activity opened the door for the evangelical alliance with the most conservative wing of the Republican Party, it was a door that he himself refused to walk through.