Bernard von Bothmer teaches history at the University of San Francisco and Dominican University of California. He is the author of “Framing the Sixties: The Use and Abuse of a Decade from Ronald Reagan to George W. Bush” (University of Massachusetts Press, 2010).

As the world is currently observing during the Winter Olympics underway in South Korea, politics and sports often intertwine. To help understand how this connection played out in the past comes the timely book Berlin 1936: Sixteen Days in August by Oliver Hilmes. 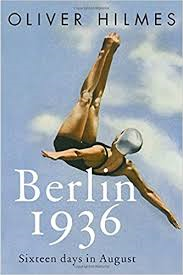 Hilmes, who holds a doctorate in twentieth century history, is the author of several best-selling works of German and European history on topics ranging from composer Alma Mabler; pianist and composer Franz Liszt; his daughter, Cosima Wagner; and Ludwig II, the mid-to-late 19th century king of Bavaria. The book is translated from German into English by the Berlin-based writer and journalist Jefferson Chase.

Berlin 1936 is meticulously researched, with the author having done extensive archival analysis. The text is wonderfully paced, enormously suspenseful, and filled with remarkably vivid descriptions.

We see how the Nazi regime, lead by Goebbels, uses Orwellian language throughout the games to strengthen the Nazi state. The Germans even manipulate the torch parade in order to link “antiquity with the present day” (9). The pageantry of the games is used to shamelessly “show reverence for Hitler” (13). After the opening ceremony, the German athlete representing Germany takes the Olympic oath and then “waves a swastika flag instead of the Olympic one” (16), prompting one diplomat to hauntingly declare that “they could mobilize their entire nation just as smoothly for war” (17).

In Hilmes’s analysis, “The 1936 Summer Games are a global media event the like of which has not been seen before” (48). Most importantly, “The National Socialists spare nothing in their attempts to impress the world” (49).

But behind the curtain and the facade of harmony, things are grim. “The number of unusual deaths recorded in the autopsy reports in the first half of August 1936 is quite striking” (62), Hilmes writes. Concentration camps are even within a few miles of Berlin. Repeated several times in the text is the phrase “bread and circuses.”

The overt racism and anti-Semitism of the Nazi regime make for especially uncomfortable reading throughout.

Hilmes’s concise history of the German buildup after World War One is especially precise and instructive. And since I teach American history, I was especially riveted by the thrilling sections in the book on Jesse Owens. Even though most readers know the outcome of his events, the narrative in these sections is especially tense and gripping, a testament to Hilmes’s astute writing skills.

Through Hilmes’s character portraits, we become aware of the Nazi regime’s obsession with bloodlines and religious background, as numerous individuals try to hide the fact that they are partly Jewish, with several even unaware of their Jewish background. There are numerous references throughout the text to so-called “half-Jews.”

Writer Thomas Wolfe is perhaps the figure most discussed in the text. One of the strengths of the narrative is the transformation we see in Wolfe from a naive admirer of the German state -- “everything works perfectly in Germany” (85), he says -- to a skeptic.

The same, sadly, cannot be said of the German filmmaker Leni Riefenstahl, another focus of Hilmes, whose pathbreaking and brilliant documentary filmmaking enabled Hitler in enormous ways. “Hitler wants the film,” Hilmes writes, “to present the rest of the world with a seemingly objective picture of an open-minded, cosmopolitan and peaceful Germany” (77).

Holmes’s writing style is reminiscent of the New Journalism first practiced by Tom Wolfe, Norman Mailer, and Gay Talese and others in the United States in the late 1960s and early 1970s, in which the author seeks to describe the inner thoughts of the characters described.

One highlight of the text is the frequent discussion of William Edward Dodd and his daughter Martha. Berlin 1936 also gets inside the messy lives of the Nazi henchmen, especially Goebbels and Goring.

What is clear is that among the many enemies of the Nazi regime is the nightlife of Berlin. Describing one bar, Hilmes writes that “the things that go on there are abhorrent to the Fuhrer” (45). The author’s well-honed expertise as an historian of European music makes his sections on the role of American jazz in Berlin in the 1920s and 1930s especially informative. His analysis of one single piece of music (p. 75), for example, is especially dazzling.

Not everything works in the book, however. The Berlin weather reports briefly described at the start of each chapter at first help set the scene for that specific day’s competition but soon become a tiresome distraction, adding little to the book’s flow, especially since the weather does not really change that much.

Each chapter is preceded by an oftentimes-powerful and arresting historical photograph; this reviewer wished the author had included more. The book would also have benefited from photographs of the many characters followed in the text, as well as maps of Berlin for those who have never visited the city.

At times the book reads like a restaurant and nightclub review, of interest more to foodies and partygoers than historians. Occasionally, the various stories do not hold together and are presented almost randomly.

And there is sometimes too much detail, with a great many names and places, the vast majority unfamiliar to non-German readers. One figure, for example, Hannes Trautloft, is mentioned briefly at the start of the book, and then reintroduced 100 pages later, who by that time has been forgotten by the reader. He then comes back once more, 70 pages later. One paragraph mentions eight different names (46). This style is repeated in many other sections of the book, too, and since there is no glossary, confusion often results, as the people blend into a blur. One two-page section contains 17 different names (142-143). One single sentence had ten (202). And many names mentioned in the text did not make it to the index.

But Hilmes tells a truly remarkable tale of a government that would change the history of the world in but a few years.

“Most of the foreign visitors enjoyed their trips and came away overwhelmed by what Nazi Berlin had to offer,” Hilmes concludes. “Hitler and his regime were able to present themselves as peace-loving, reliable members of the family of nations. These sixteen days of August give many people new hope that things will change and Hitler can be trusted to keep his promises of peace. The sporting spectacle has helped pull the wool over their eyes” (246).

The book’s final chapter, entitled “What Became of …,” is enormously effective. Here, the author’s impeccable research skills are on full display.

A key theme emphasized is the ruthless efficiency of the Nazi regime. The Olympics are organized with impeccable precision. It is disturbing for the reader to know that such organization and precision would within only a few years be utilized to engage in mass murder on a scale never witnessed before or since.

The book reminds us that Germany was the technological leader of its day, from television to film to its transportation and communications system. One shudders to think how these technological advances will be harnessed to be used for the cause of mass extermination in the years to come.

Most of all, reading the book is a haunting experience. If only people knew of the horrors that Hitler’s hate and well-oiled regime would unleash upon the world, resulting in the deaths of up to 85 million people, the highest death count of any clash in human history. If only someone who had been within proximity of Hitler had tried, with an assassin’s bullet, to stop the madness. The tale of the American tourist who managed to climb into Hitler’s box -- to give him a kiss -- and the accompanying photographs of the encounter will send chills up your spine.

One American athlete recalled about her time in Berlin that summer: “I had such fun! I enjoyed the parties, the ‘heil Hitlers!,’ the uniforms, the flags … Goring was fun” (200).

In the end, this book is a portrait of cowardice, as a great many influential and powerful figures -- diplomats, International Olympic Committee leaders, members of the American Olympic Committee, and, of course, the average Berliner -- refused to stand up to the criminals of the Nazi regime when they had their chance. It is a dark lesson.