Jessica Ziparo earned her JD from Harvard Law School and her PhD from Johns Hopkins University. She currently lives in Seattle, WA. 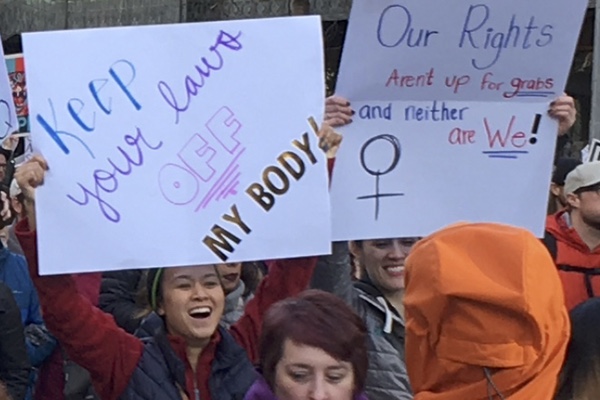 We do not want to be petted. We want simply justice. We ask no advantage. We ask for Equal Rights. Can we ever have them? We are not playthings. We are not dolls. We are human beings.—Gertrude, clerk in the Department of the Treasury, quoted in The Revolution, December 16, 1869 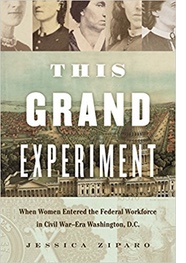 In This Grand Experiment: When Women Entered the Federal Workforce in Civil War–Era Washington, D.C. I write about women like Gertrude. Much of the material feels remarkably present. Sometimes those moments are mundane. Patent Office clerk Julia Wilbur complained to her diary in May 1869, “My new boots murdered my feet coming home.” Others evoke a sisterly empathy across the decades, such as when an 1873 guidebook author describing female federal employees caring for children and grandchildren remarked that the “hours passed in the office are probably the least fatiguing of the day.” Most of what feels familiar, however, despite the passage of over a century and a half, are the harassment and discrimination Gertrude railed against in 1869. While paralyzing frustration threatens to overwhelm when reading about the mid-nineteenth century versions of the same fights women are fighting today, early female federal employees leave us with a powerful reminder of how women might move forward.

Although a small number of women had been quietly working for the federal government prior to the Civil War, during the national conflict and Reconstruction, suddenly, thousands of white, middle-class women were publicly accessible in government buildings, on omnibuses during peak travel times, and in mixed-sex boardinghouses and offices. Many men saw the women’s presence in what had been exclusively or predominantly male spaces as an implicit invitation for men’s “attention.” Women also had to solicit and secure male attention in order to obtain federal work, further feeding questions about the women’s “respectability.”

One example of harassment could have been ripped from today’s headlines if the technology was updated. In April of 1863, Reverend J. C. Richmond, Union Army Chaplain and Harvard graduate, had a messenger in the Treasury Department deliver a letter to Rose Bielaski, a young woman who worked in the Office of Internal Revenue. Richmond’s dense, scratchy, sexually explicit text surrounded multiple pictures he had drawn of his penis, which he referred to as, “The Prince of Love.” He also drew a picture of Bielaski’s genitals being penetrated by his penis. Richmond’s sustained and aggressive harassment of Bielaski, including threats to show his letters to her mother, eventually reached Bielaski’s supervisors and the War Department.

An investigator from the War Department caught Richmond writing one of his harassing letters and brought the matter to the Washington, D.C. police, but there was no law prohibiting his behavior or protecting women like Rose Bielaski, who must have been traumatized by being the recipient of Richmond’s letters and the resulting federal investigation. Later events in the Treasury Department, including an 1864 sex scandal that garnered national attention, eventually led to what may have been the first attempt to curb workplace sexual harassment, but also helped give birth to the prevailing national stereotype that all female federal employees were sexually immoral. Today, women continue to be harassed at work and in the streets by men who view their mere presence as a solicitation for male attention and while laws now exist to protect women, laws only do so if they are effectively enforced and victims are believed.

Readers of This Grand Experiment may also have a sick sense of déjà vu reading about early female federal employees’ attempts to receive equal pay for equal work. Male supervisors brought women into the federal workforce because they had more work to do than their budgets would allow, and women would do all of the work for half (or less) of the pay demanded by men. Women weren’t taking these jobs at reduced salaries out of a sense of patriotism or masochism; they wanted federal jobs because they paid so much more than almost any other position open to women at the time and women flooded federal offices with applications from across the country. By the end of the 1860s, however, when the acute crisis of war had passed and women had been for years laboring alongside men who performed identical or similar work but earned twice, or as much as three times, the salary, women began to question why they were being paid a fraction of what their male colleagues received. Hundreds of women began to petition Congress to raise their salaries, forcing Congress to debate whether men and women should receive equal pay for equal work.

As a gender pay gap remains to this day, readers will not be shocked to learn that what eventually passed in Congress was not a straightforward equal pay law, although they may be surprised at just how close such a law came to being enacted in the late 1860s and early 1870s. Instead, what Congress passed was a law allowing supervisors to appoint women to the graded class of clerkships available to men. Since there was no incentive other than “simple justice” for such an appointment, most women remained in lower paying “female” positions. This failure on the part of Congress helps to explain why the organizers of the Women’s March on Washington had to include “We believe in equal pay for equal work” in their Guiding Vision and Definition of Principles in 2017.

Part of the reason women came so close to achieving pay parity in the Civil War–era is because it was one of the few instances in which female federal employees engaged in a form of collective action. Women’s pressure for appointments, and the paternalism and sexualization of women that permeated female federal employment, meant that it was every woman for herself in the federal departments. Turnover was high, and men often saw women as disposable. But they weren’t. In fact, in 1864, at the height of the Civil War, Treasurer F. E. Spinner told Congress: “But for the employment of females whose compensation is low, and in most cases too low, it would have been impossible to have carried on the business of the office.”

Here, perhaps, is the reminder that the women of today can take from the women of the 1860s. Women have more collective power than they realize and can do a better job of harnessing it. As has long been the case in the women’s rights movement, women and their advocates are fractured. Research and communications firm PerryUndem conducted a poll in 2015 that revealed that while 85% of Americans claim to believe in “equality for women,” only 18% self identified as “feminists.” Historically and currently, heterosexual white feminists have failed to recognize and respond to the issues of women of color and LGBTQ communities. Studies have shown that false allegations of sexual assault are rare, rape is alarmingly common, and yet still victims aren’t believed. We have the opportunity to create the watershed moment for women’s rights that seemed possible in the 1860s. Let’s not let another century and a half pass by.